We are looking for highly motivated students with a background in optics, physics or signal processing. Empa provides state-of-the-art facilities in a cutting-edge research environment. 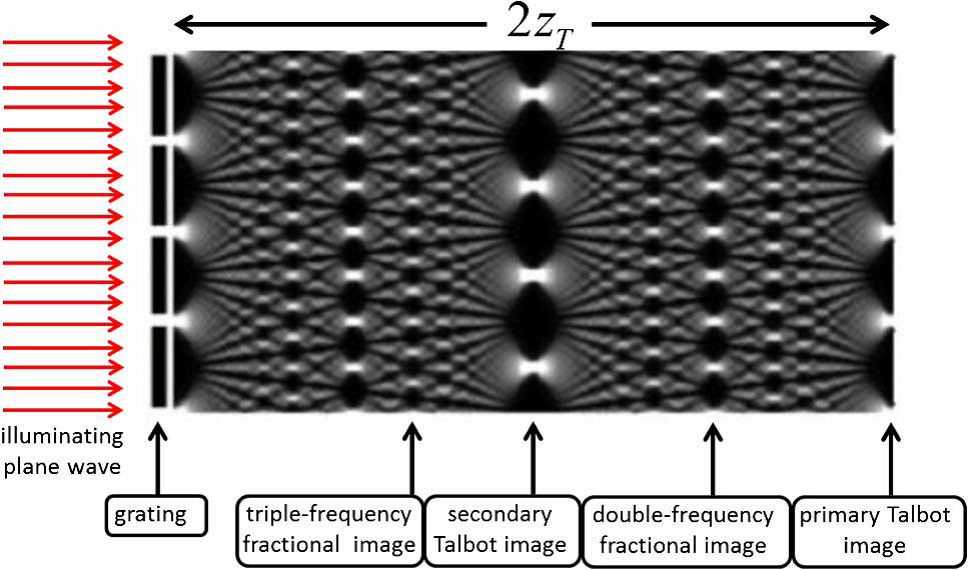 Talbot effect: Self-imaging of a grating illuminated with a coherent wave (from [2])
Terahertz radiation can penetrate a wide variety of visually opaque materials such as polymers, textiles and ceramics. Its wavelength lies in the range of 70-500 μm, which makes the measurement set-up insensitive to vibrations and object roughness and allows easier access to reconstructions at the diffraction limit. It is used, among others, for holographic imaging in transmission and reflection [1], but it also holds considerable promise for security body scanners replacing X-ray systems.
A situation to be dealt with is imaging an object hidden behind a textile. In such a case, the periodic structure of the latter gives rise to the so-called Talbot effect, which refers to self-imaging of the periodic phase and amplitude structure illuminated with coherent light [2]. While this can be viewed as a nuisance disturbing the diffraction pattern of the hidden object, it can probably also be used for “self-elimination” of the periodic diffraction pattern from the object wave.
In this master thesis, textiles and other periodic objects will be imaged using a THz laser and a micro-bolometer camera in a holographic setup, both in transmission and reflection. Several laser wavelengths and camera positions will be used to explore the Talbot effect in the THz regime. Holographic reconstruction algorithms will be applied to eliminate or enhance the textile diffraction. Depending on the skill of the applicant, improved reconstruction algorithms will be developed.
You will learn about THz technology, wave propagation and holographic reconstruction algorithms, and you will work towards publishing the results. For more information contact Dr. Erwin Hack. In your application please include a short motivation letter, your educational background and BSc grades.
[1] L. Valzania, P. Zolliker, E. Hack, Topography of hidden objects using THz digital holography with multi-beam interferences, Optics Express 25 (2017) 11038-11047
[2] J. Wen, Y. Zhang, M. Xiao, The Talbot effect: recent advances in classical optics, nonlinear optics, and quantum optics, Advances in Optics and Photonics 5, 83–130 (2013)