Interacting with the sub-surface

Normally, one would approve that the interaction of a molecule with a surface is determined by the sum of interactions between that molecule and the molecules or atoms at the surface. Here we challenge this simplification by also considering the sub-surface. Modification of few nanometers below the surface can also be an interesting means to change the way molecules interact with surfaces.

This research topic is potentially important because many functions of a surface are affected by the way molecules interact with that surface; adding this new control parameter opens new possibilities and combinations with surface termination. There is a wide range of phenomena that are within reach of the new method, ranging from wetting behavior, to biological interactions, antibacterial effects, to more technical applications like corrosion or heterogeneous catalysis.

We consider two possible ways a molecule at a surface can interact with the sub-surface region:

To start with, creating a controlled and stable sub-surface structure is not trivial; we approach this problem by deposition of nanometer thick cross-linked plasma-polymer films, where the stoichiometry and functional group density can be readily controlled by processing parameters.

We recently succeeded producing vertical chemical gradients (VGRAD), where a hydrophobic surface is terminating a sub-surface 3-5nm hydrophilicity gradient. In this case the polymers with variable hydrophilicity are based on HDMSO monomers which are processed under plasma conditions of variable oxygen content and variable specific energy input. 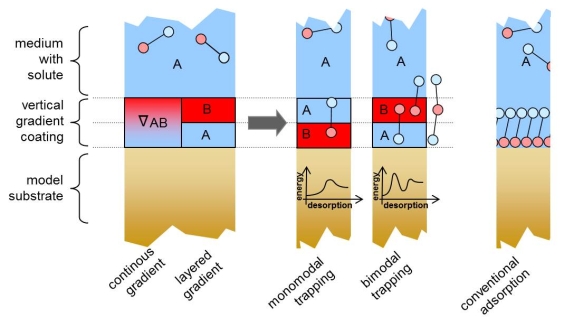 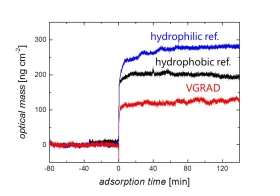 To assess the properties of such VGRAD coatings, we have monitored the adsorption of albumin protein from aqueous solution. The reference surfaces used were gradient-free hydrophobic or hydrophilic plasma polymers of the same HDMSO type. Interestingly, we find that the adsorbed mass on the VGRAD surface is lower than on any of the gradient-free reference plasma polymers. The conclusion is that the modified VGRAD sub-surface leads to a modified protein adsorption.

It is known that protein adsorption is chiefly controlled by water structural effects like the hydrophobic effect. Using neutron reflectivity and IR experiments we could show that such plasma polymers are indeed hydrated to an extent that depends on the hydrophilic balance. We thus hypothesize that besides modified Van der Waals interactions from the sub-surface, also specially structured sub-surface water will affect adsorbed protein conformation. Further experiments are planned to test this hypothesis.