Reactive extrusion is a process usually performed in a twin screw extruder where either direct synthesis of polymers from their respective monomers can be performed, or polymers can be chemically or physically modified in a continuous manner without the use of organic solvents. Thus, this process can be considered as environment friendly and offers numerous ways to functionalize polymers. In two separate approaches as outlined below, we have performed reactive extrusion of different polymers via novel strategies.

We have addressed two important aspects of sustainable development of new flame retardant materials, i.e. in situ solvent free synthesis of flame retardant macromolecules during thermal processing of polymers, as well as their leaching behavior. Polyamide 6 (PA6) was functionalized by a novel reactive extrusion process which lead to the in situ formation of phosphine oxide based macromolecules during its thermal processing. In situ synthesis of phosphine oxide based macromolecules were formed by Michael addition reaction of divinyl phenyl phosphine oxide (DVPPO) and piperazine as reactive additives. The formation of phosphine oxide macromolecules (oligomers and low molecular weight polymers) were confirmed by NMR study of the modified PA6 polymer and UPLC-MS analysis of extracts from PA6. No side reaction of Michael adducts with PA6 was observed, and modified and unmodified processed PA6 showed similar molecular weights.Elemental analysis of the modified PA6 after extraction with chloroform and water confirmed retention of the majority of phosphorus species, which is possibly due to entanglement of phosphine oxide macromolecules with PA6 chains. This non-leaching behavior of modified PA6 is an important requirement for thin walled substrates like fibers and films where long-term durability is very important. The reactive extruded PA6 was further processed into textile fibers via melt spinning in a laboratory plant. The modified PA6 was evaluated for fire performance in small-scale fire tests where it showed improved fire performance. Details of the research can be found in the published paper (Composites Part B 178 (2019) 107470, https://doi.org/10.1016/j.compositesb.2019.107470).

Reactive extrusion of PA6 and its processing:

Metal oxides can be converted to metal nanoparticles via several established methods using high energy or a reducing agent. As a result, these methods suffer from high energy or solvent consumption. In contrast, we developed a method to synthesize metal nanoparticles from metal oxides by reactive extrusion, which to date was considered difficult since decomposition temperatures of metal oxides are much higher than processing temperatures of most thermoplastic polymers. Our proposed method initiates the reduction of metal oxides via partial oxidation of polymer chains during their melt processing. It was demonstrated using Ag2O as a precursor for preparation of silver nanoparticles (AgNPs, 20-40 nm) during melt processing of polymers such as Polyamide 6, PLA and polypropylene. We observed that a polymer melt surface energy above 25 mJ/m² facilitates reduction of silver oxides, by improving the contact between pre-cursor and polymer chains. As a result, nearly complete reduction of Ag2O to AgNPs was achieved at 165 °C using PLA as the polymer matrix. One must notice that using metal oxide as a precursor does not release any toxic gasses, which otherwise is not possible in case of metal salts with nitrate, acetate etc. This method can also be extended for preparation of metal NPs using other metal oxides. Details of the work can be found in published paper ( Chemical Engineering Journal 389 (2020) 123983, https://doi.org/10.1016/j.cej.2019.123983).

Concept of in situ metal-polymer nanocomposites via reactive extrusion process: 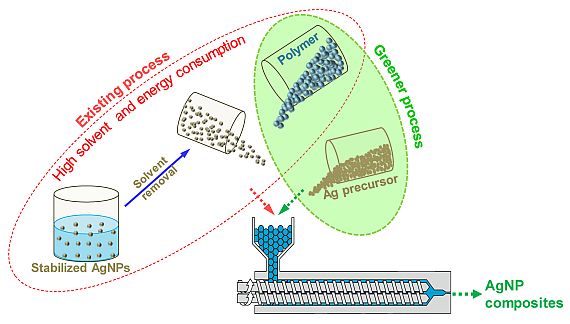