The main objective of the group is to synthesize functional molecules which are used as additives for bulk polymers and are also used to modify the surfaces of organic and metal based materials.

Phosphorus based flame retardants with tailored physical and chemical properties are synthesized by activation of P-X bond. Such additives are not only environmentally friendly but also synthesized via sustainable routes. These additives can be scaled up in industry for commercial exploitation. The group has successfully demonstrated the suitability of such additives for application in fibers, PU foams and wood based materials. 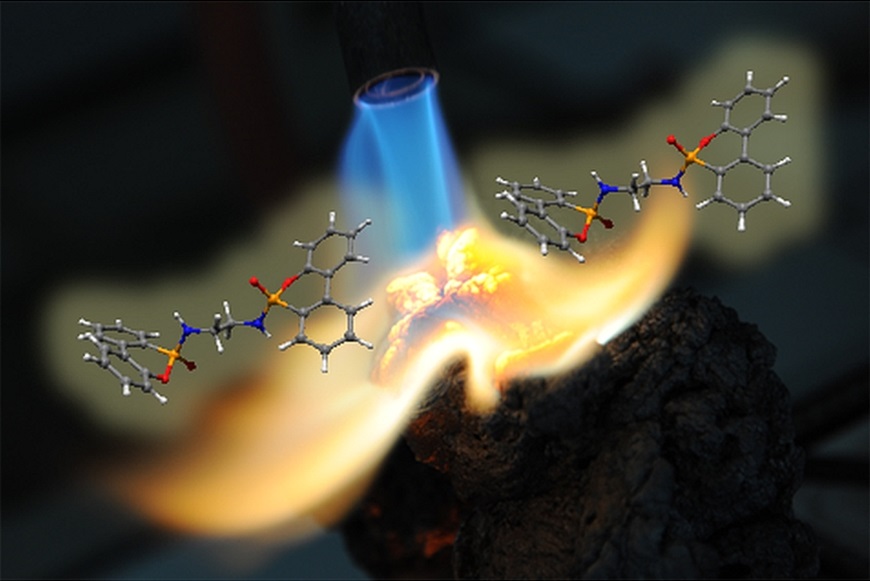 As part of fundamental research we ae currently studying the thermolysis mechanism of phosphorus based compounds by identifying transient gas phase active P based species.

Our research on metal surface modification involves studying the interaction of functional phosphorus compounds with aluminum so as to improve their adhesion to organic polymers and reduce their corrosion. Via this research we are able to synthesize novel phosphorus based multi-functional molecules which can bind to the metal and also crosslink by itself to form a network on the metal surface. 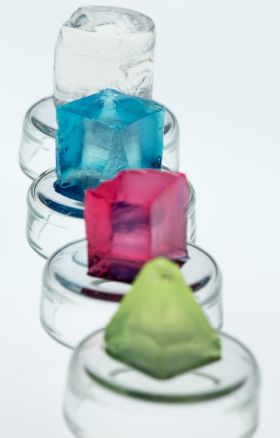 Gels after immersing in the different dyes.

Recently, water-insoluble and water-swellable gels are attracting an increasing interest in a wide range of biomedical applications such as in the pharmaceutical field as carriers for delivery of various drugs, peptides, and proteins. Their reversible swelling ability enables them to modulate the release behavior according to the external stimuli such as pH, temperature, ionic strength, electric field, or specific analyte concentration gradients. A number of methods have been developed for preparation of cross-linked polymeric gels, such as radicals initiation generated via thermal energy or the photo-cleavage of initiator molecules, and “Click” chemistry, but the applications of above methods are limited because of the toxicity of used catalyst or initiator and the complicated chemical synthesis makes them still a significant challenge.

Novel phosphine oxide based gels were synthesized by Michael addition reaction of TVPO and various nucleophiles in a single step synthesis process resulting in pH sensitive smart gels. Their structure and properties were characterized by SEM, Rheology, solid-state 13C and 31P NMR. Swelling and de-swelling behavior of the gels was studied in different environments (solvent, pH and temperature). The Gels were loaded with active molecules (dye and drugs) and their release behavior was investigated. Preliminary cytotoxicity studies of the gels were performed using an Amar blue assay. The data showed that there is no toxic material diffusing out of the Gel matrix. 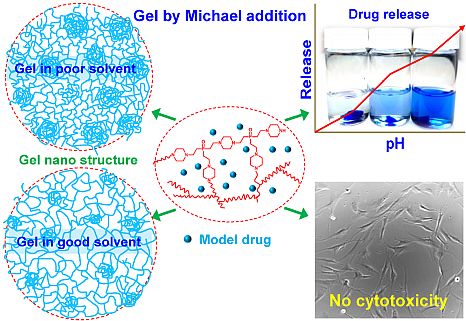 Phosphine oxide based gels and their application

In the era of sustainability, considerable efforts are devoted to prolong the life span of different polymeric products. Increasing outdoor application of polymeric prod-uct expose them to damage caused by weathering and abrasion. Additionally, changing environmental condition and demanding application requirements poses significant challenges for development of such coatings with commercial viability. In our group we work on development of functional coatings for protection against weathering and abrasion. We develop these functional coatings by addition of dif-ferent organic and inorganic nano materials in various acrylate based co-polymers. More recently we are working with our research partner to develop UV resistant coating by incorporation of bio-based additives.
We are also focused on development of functional silica nanoparticles (SiO2 NPs) for removal of metal contamination from water. Such SiO2 NPs are synthesized by using phosphorous based multifunctional ligands. During nanoparticle synthesis some of the functional groups in the ligand can undergo condensation with TEOS (Tetraethyl orthosilicate) and rest functional groups are transformed in to phosphonic acid. This allows us to achieve permanent phosphonic acid functionality in the SiO2 NPs.

SEM images of SiO2 NPs synthesized using only TEOS and TEOS along with phosphorous base ligand.

Master Projects in the following area are availabe: