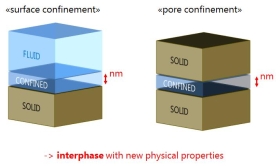 The term “confinement” is often used to describe this nanometer thick interphase of fluid with new physical properties, which occurs in intensified form in a nanometer gap between two solids.

But what are these new physical properties? Let us see some examples:

Modified water structure at the interphase

Water is indisputably the most relevant small molecule in the biosphere. It is involved in biochemical reactions inside our cells as well as on the surface of implants or technical surfaces that are exposed to humid atmospheric influence.

The water molecule is known to exhibit an unusually complex behavior due to the different molecular interactions that are possible with a water molecule; these include Van der Waals interactions, dipolar interactions as well as hydrogen bonding, which can affect the orientation of the molecules. In part of our research we want to shift the relative strength of these interactions by a modification of the local environment in the vicinity of water molecules. One implementation is to confine water inside a matrix where the water-water distance is increased, so that hydrogen bonding is effectively switched off while the longer-ranged dipolar interaction remains intact. A shift of interaction strengths in the opposite direction is possible by implantation of a dipole moment at the confining surface. We study the effect of such measures on the water structure at the interphase using a unique version of the extended Surface Forces Apparatus that allows full atmospheric control. This means we can set and maintain conditions that are commonly not attainable, like degassed water, gas-enriched solvents, supercritical CO2 and other interesting loci of the (fluid bulk) phase diagram…

Another important example of an interphase is given if the fluid contains ions (e.g. salt solution). Here, the solid surface typically acquires a net electrical charge and counter ions from the salt solution form a so-called electrical double layer (EDL). While this phenomenon is long known and used in technological applications, the theoretical understanding of the inner structure is far less clear. For instance, the well-established DLVO theory breaks down in very narrow pores or at salt concentrations as low as 10% of saturation. We can study the structure of such EDLs using the extended surface forces apparatus (eSFA) in collaboration with the Laboratory for Surface Science and Technology at the ETH Zürich, the Paul Scherrer Institute and the University of Illinois, USA. We find that the salt (counter) ions carry along a hydration shell, forming some a “soft ball” of a few Ångstom size that can layer next to the surface, like tennis balls on the floor of a box. We can sense these layers of balls using the high force sensitivity of the instrument and even detect sub-atomic transitions, which are related to the change of hydration water structure in the system. Knowing better the inner structure of EDLs is important for biological interaction and also technically relevant fields like rock weathering. 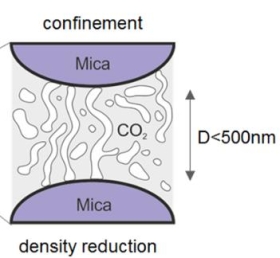 Our unique pressurized surface forces apparatus can also be used to study critical and supercritical fluids like CO2 under confinement. The new physical insights gained there are potentially important for future technological developments in the area of polymer processing and polymer foaming. In particular, we could show that order parameter (=density) fluctuations near the critical point prevail unexpectedly and measurably along the extension of the CO2 coexistence line and lead to strong attractive forces in near critical and surprisingly also into supercritical conditions. This force is expected to have a pore stabilizing effect, for example, during pore formation in polymers processed with critical and supercritical fluids.

In parallel to measuring surface forces and molecular interactions we are also using a transmission interferometric adsorption sensor (TInAS) to assess the adsorption of molecules onto surfaces. The method is sensitive enough to detect the adsorption isotherm of water on mica crystal surface or the coupling of antigens with surface immobilized antibodies. More recently we use this method to study the properties of different surface functionalization’s and novel plasma polymer films, for example, in terms of protein adsorption.

We also work on extending this method now to be able to detect changes in refractive index of an molecularly adsorbed film; this would allow us to follow solvation and conformational changes of adsorbed molecules. Besides offering a comparable sensitivity with other bio-sensing methods, the TInAS methode is significantly more simple and less expensive.