For a few decades, organophosphorus compounds (OPCs) have been extensively used as flame retardants (FRs) to inhibit or slow the spread of fire. These compounds generally work in the gas phase, in the condensed phase, or in both, depending on the chemistry of the polymer matrix or substrate. Recent research has shown increased attention in development of new environmental friendly gas phase active flame retardants. However the gas phase flame inhibition of such additives is not well understood.

Owing to the lack of suitable analytical techniques for selective and instantaneous analysis of the transient species formed in the thermal decomposition of OPCs, the elucidation of the gas-phase activity of phosphorous compounds is quite challenging. Important questions are still open, such as how individual bond energies in the flame-retardant molecules determine their fragmentation into gas-phase active products under thermal stress, what intermediates are formed under heat, and how flame-retardant efficiency can be maximized by targeted incorporation of specific functional groups into the flame retardant.

Our main objective is to identify the intermediates and the routes that generate the key phosphoryl radicals in the gas-phase flame retardant action, with a special emphasis on the POX generation capabilities of OPCs. In our research we have chosen dimethyl methyl phosphonate (DMMP) as a model OPC and studied the thermolysis mechanism using a unique experimental setup (pyrolysis – VUV photoionization-iPEPICO) 1.  Identification of the product distribution as a function of pyrolysis temperature contributes to our understanding of fire suppression and helps us in proposing FR candidates with enhanced POx release capabilities. Different computational chemistry approaches are applied in this study to augment the experimental data, including ab initio calculations to map the potential energy surface of the neutral state, and locate transition states and minima to verify and validate the proposed decomposition mechanisms. 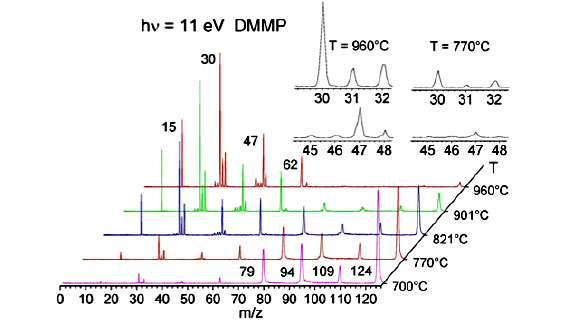 Threshold photoelectron (TPE) spectra were simulated by applying a Franck–Condon approach and compared to the experimental results to unequivocally identify unknown elusive species. 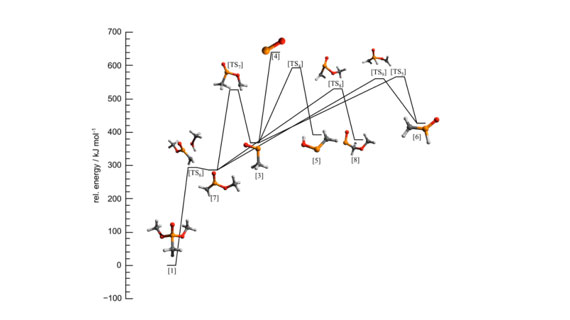 BS-QB3 energy diagram for the thermal decomposition of DMMP

The above figure shows one of the pathways of the proposed decomposition of DMMP. This unimolecular decomposition pathway of DMMP shows formation of PO*, which is considered as an important flame inhibition. Formation of other HxPOy species requires oxidative conditions.