The aircraft noise calculation FLULA2 program was established at the Empa in the 1980s and has since then been continuously developed according to the state of the art.

FLULA2 is based on a large sound source database which was established based on measurements under real air traffic operations. The most extensive measurement campaigns are those of the years 1991 and 1996 at Zurich airport. In the calculations with FLULA2, a point source with directional sound emission characteristics is moved stepwise along the flight trajectory. For each discrete position on the trajectory, the instantaneous sound pressure level at any desired receiver points, which are usually arranged in a grid, is calculated. From complete fly-overs one obtains realistic level-time-histories from which any desired A-weighted acoustic exposure indicator may be derived.

FLULA2 is complemented with various supplementary programs to process input data for calculations as well as to post-process FLULA2 calculations, e.g. to obtain exposures (noise contours) around airports from a multitude of single flights. Among other things, radar data of real air operations can be processed for aircraft noise calculations. Thus, calculations of annual flight operations on an airport can be accounted for in great detail. 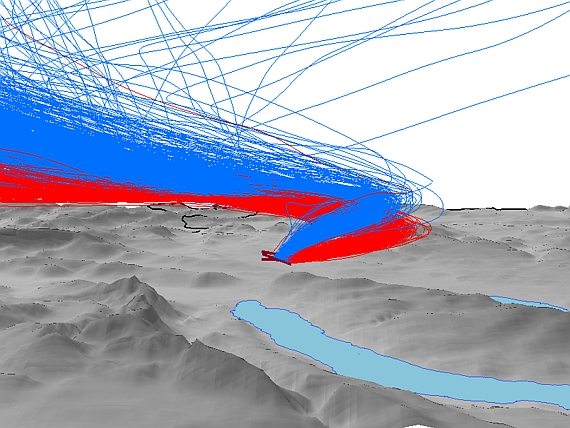 Starts towards the south of the Airbus 320 (blue flight trajectories) and the A340-300 (red) on Zurich airport.

FLULA2 is being used for a large number of sophisticated services and research projects, namely for aircraft noise calculations of Zurich and Geneva airports and military airfields, for prognosis calculations in the context of the Sectorial Aviation Infrastructure Plan (SAIP) of the FOCA, as well as e.g within the research project SiRENE (Short and Long Term Effects of Traffic Noise Exposure) . The calculated aircraft noise exposures allow establishing limit value curves which reveal the areas where legally relevant limit values are exceeded . 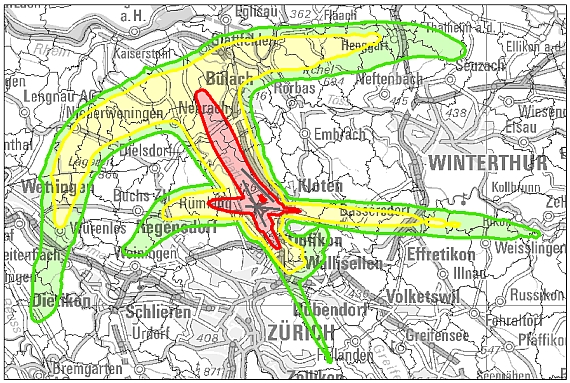 Uncertainties of measured and calculated aircraft noise (German only)