Climate change as a consequence of the increasing CO2 concentration in the atmosphere has been identified as one of the most critical challenges facing mankind and requires immediate action: “The Paris Agreement aims to strengthen the global response to the threat of climate change, ( … ) by low greenhouse gas emissions development, in a manner that does not threaten food production”  (United Nations, 2015). Switzerland has committed to transform its energy technology from a fossil to a renewable basis (Energy Strategy 2050). Numerous studies and publications have indicated that the sun’s energy and its derivatives (wind, water) are by far sufficient to supply world’s energy demand; but the large daily and seasonal power variation of renewable energy is an additional complication for a wide spread replacement of fossil energy by renewable energy. Our research is devoted to this challenge by identifying the bottlenecks and forward technology to overcome them.

Harvesting of solar light and the conversion of the energy into an electrochemical potential is the crucial step of the production of a renewable energy carrier. Hydrogen production may be seen as the starting point in a closed circle using hydrogen as a renewable energy carrier. The fundamental processes of renewable hydrogen production by electrolysis are relatively well understood and pilot plants have demonstrated the feasibility on the industrial scale. Nevertheless, today’s hydrogen stems to 95% from fossil sources due to economic reasons. Research and development of hydrogen production is needed to make renewable hydrogen cost competitive to fossil hydrogen. This generates demands for fundamental research on new concepts and materials in electrolysis.

Our focus is in developing accessible spectroscopic techniques for a comprehensive understanding of the electronic structure and its dynamics in materials for solar water splitting. This includes the electronic structure of single molecules as well as extended solid frameworks. Our approach centres around using operando techniques, especially, photoelectron spectroscopy and magneto-optical spectroscopy. The former is the membrane-based approach for X-ray photoelectron spectroscopy (XPS) analysis of catalytic systems at ambient pressure. This includes, but is not limited to, the reactions in aqueous environment. The membrane device, which is composed of a polymer impregnated with a photocatalytic system for water splicing, is required to bridge the desired analytical pressure of 1 bar to the ultra-high vacuum (UHV), which is required for the XPS analysis (for details on the system see next section). We develop water permeable membranes for the XPS membrane approach based on Co-nanoparticles embedded in polydimethylsiloxane. A different technique, time resolved magneto-optical spectroscopy, is developed in our lab for studying homogeneous as well as heterogeneous solar water splitting systems. The work is embedded and partially financed by the LightCheC project at UZH.

The transformation from the excessive consumption of fossil energy towards a sustainable energy circle is most easily marketable by not changing the underlying energy carrier but generating it from renewable energy. Hydrocarbons Carbon based fuels such as methane and methanol can be principally produced from renewable hydrogen and carbon dioxide, as the corresponding technical processes are already established (see figure). The infrastructure, e.g., the natural gas pipelines, fuel stations, heating in households, gas power plants exists and could be further used without extra effort. A recent study highlights that solar methanol islands could produce enough fuel in the long term to make all mobility CO2-neutral – worldwide. Methanol is a liquid However, primarily goal of most industrialized chemical processes are aiming at the production of a chemical compound with highest economic efficiency. The energy efficiency is important, too, but usually ranks as a secondary parameter. This is different in chemical processes aiming for the production of a chemical energy carrier. A chemical energy carrier, e.g. hydrogen, methanol, and methane, is a vector, i.e., it is most important how much energy can be delivered with it considering also the conversion losses; an energy carrier costing more energy for production than it delivers does not make any sense. The energy efficiency of the production and conversion reactions is thus the most relevant parameter.

In our we are addressing this issue from various perspectives, i.e., 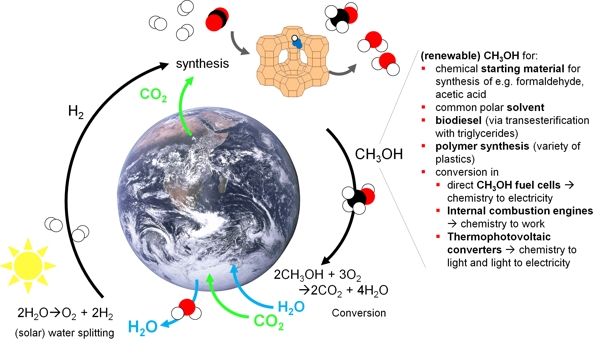