Pietro Lura is Head of the Concrete and Construction Chemistry Laboratory since 2008 and professor at ETH Zurich, Institute of Building Materials, since 2011. He received his MS in 1998 from the University of Brescia, Italy, and his PhD in 2003 from the Delft University of Technology, The Netherlands. He has been assistant professor at the Technical University of Denmark (2003-6), visiting researcher at the National Institute for Standard and Technology (2002) and at Purdue University (2005), and patent examiner at the European Patent Office in Munich, Germany (2006-8).

His research interests include hydration and early-age properties of concrete, in particular microstructure development, shrinkage, setting, early-age cracking and internal curing. In these fields he has done important contributions to both understanding of the fundamental mechanisms and to advancement in the state of the art. His work on measuring techniques of autogenous deformation earned him two awards from the Transportation Research Board, the Bryant Mather Award in 2006 and the Fred Burggraf Award in 2007. For his work on internal curing he received the American Concrete Institute Wason Medal for Materials Research in 2007. He received for the second time the ACI Wason Medal in 2009 for his contribution to the understanding of the mechanisms of plastic shrinkage cracking. In 2009 he also received RILEM L'Hermite Medal in recognition of his outstanding contribution to the study of the early-age behavior and volume instability of cement-based materials.

Deputy Editor in Chief of RILEM Technical Letters (from 2016)

Member of the Editorial Board of Cement & Concrete Composites, Elsevier, (2011-15, SCIE)

In addition to heading the Concrete and Construction Chemistry Laboratory at Empa, Pietro Lura is teaching at ETH Zurich since 2009. He is also active in teaching and organizing summer courses targeted both at students and practitioners. 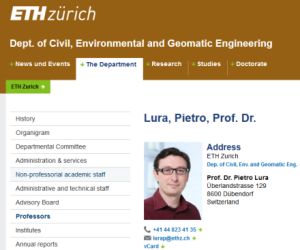