Plasma-enhanced Chemical Vapor Deposition (PECVD) is a process that converts the gaseous starting material (vapor) into thin films (deposit) via chemical reactions in the plasma and at the surface. Due to the energy delivered by the plasma, low process temperatures are feasible.

The selection of the starting materials (hydrocarbons, fluorocarbons, silanes, siloxanes, organometallics etc. mixed with reactive gases) and the plasma conditions (weak to strong chemical reactions) enable the deposition of a broad range of materials with polymer-like (functional films) and inorganic character (semiconductor, ceramic and diamond-like films). Furthermore, nanostructuring as well as vertical and lateral gradients can be achieved for advanced surface functionalities.

Plasma polymer films are typically deposited at rather mild plasma conditions to enable incorporation of functional groups such as carboxyl, hydroxyl, amino, thiol or fluorocarbon. Nonetheless, cross-linking under well-defined plasma conditions enables stable and permanent films that are demanded e.g. for biomedical applications. Increasing cross-linking and densification finally results in the deposition of diamond-like carbon films. Inorganic films are typically deposited at rather harsh plasma conditions to avoid incorporation of organic residuals. To name some examples, quartz-like films are used as barrier coatings, silicon films for photovoltaics, semiconductor films for microelectronics and hard coatings for tools and machine parts. In addition, multilayers can be deposited for optical and decorative applications.

Since plasma CVD processes depend both on reactions in the gas phase as on the surface, the plasma volume and thus the geometry of the reactor is an important parameter. To support the transfer of plasma CVD processes to industry, a pilot-scale reactor is thus available at Empa enabling both batch and roll-to-roll processes with an effective electrode area of about 1 m2. Furthermore, magnetron sputtering and combination processes can be investigated. 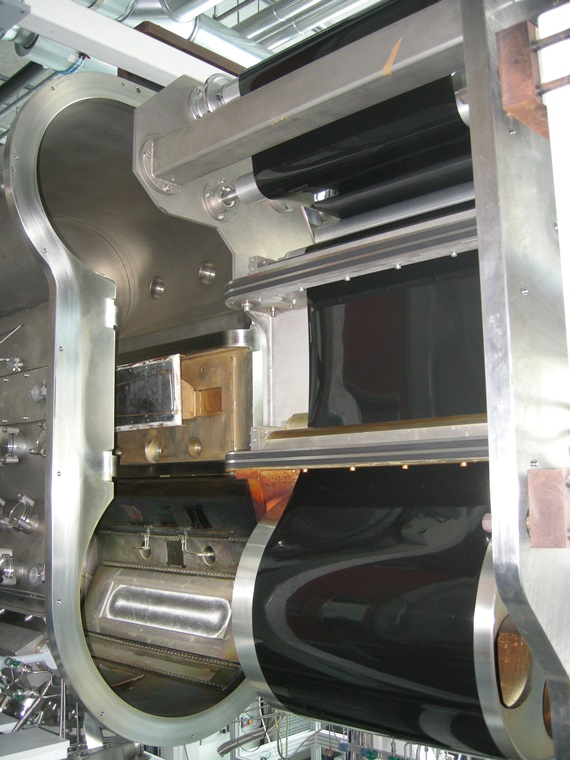