The hydration of cements can be assumed to take place via dissolution and precipitation processes. Coupling of thermodynamic modelling with a set of kinetic equations which described the dissolution of the clinker, can predict quantitatively the amount of hydrates as a function of the time and temperature of hydration: A set of empirical expressions is used to estimate the degree of dissolution of each clinker mineral as a function of time. Based on the composition of the cement and thermodynamic modelling the quantities of and volumes of hydrates form can be calculated. The quantities of ettringite, portlandite and amorphous phase as determined by TGA and XRD agree generally well with the calculated amounts of these phases after different periods of time. The findings as documented in different papers show that changes in the bulk composition of hydrating cements can be followed by coupled hydration - thermodynamic models. Comparison between experimental and modelled data helps to understand in more detail the dominating processes during cement hydration. 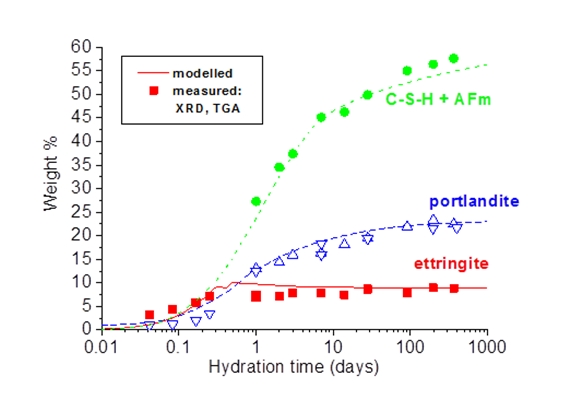 Measured + modeled changes during the hydration of a Portland cement