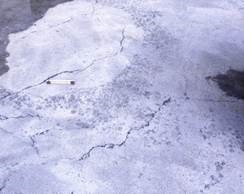 When the bleeding water on the surface of the concrete is consumed by evaporation, water menisci form (Figure 2). These menisci produce capillary stresses that put the whole concrete under compression and cause it to shrink. As long as the concrete remains plastic, the capillary stress manifests as settlement of the concrete. The settlement of the plastic concrete suddenly stops when a critical point is reached a couple of hours after casting; at this point, cracks may develop. The extent of plastic shrinkage cracking is closely related to the evaporation rate, to the settlement and to the magnitude of the developed negative pressure.

The PhD thesis of Dr. Sadegh Ghouchian at ETH Zurich was dedicated to studying the mechanisms of plastic shrinkage and plastic shrinkage cracking, combining novel experimental approaches with advanced modelling based on poromechanics:

Based on work in this thesis, a modification of a conventional method for mitigation of plastic shrinkage of fresh concrete based on comparing bleeding and evaporation rates was proposed. The proposed alternative, more conservative approach is based on the total (accumulated) amount of bleed water compared to the total amount of evaporated water (see Fig. 3). This method was published in RILEM Technical Letters : 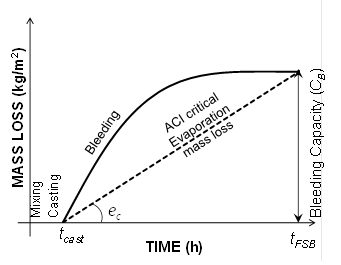 Estimation of the critical evaporation rate according to time of final set, time of casting and bleeding capacity (Fig. 3)
A novel method for the simultaneous determination of the coefficient of permeability and of the bulk modulus of fresh concrete was also developed in this thesis. These parameters, which are essential for modelling plastic shrinkage and cracking are obtained from simulating the bleeding test, which is a common and simple test that can be performed both in the laboratory an in the field. This result is a considerable contribution to the state of knowledge, allowing more accurate measurements of the permeability of fresh concrete and uniquely also of the bulk modulus of fresh concrete. This method was published in Cement and Concrete Research:
Ghourchian, S., Wyrzykowski, M. and Lura, P., 2016. The bleeding test: a simple method for obtaining the permeability and bulk modulus of fresh concrete. Cement and Concrete Research, 89, pp.249-256.

A novel method for measuring plastic shrinkage in three dimensions was developed, based on 3D Digital Image Correlation (DIC). This method was applied to study the susceptibility of concretes made of different cements to plastic shrinkage cracking, in collaboration with LafargeHolcim. It was possible to correlate the crack sizes measured with ASTM C1579 to the deformations measured by DIC and to the material properties. The rate of the bulk modulus evolution determined the size of the plastic shrinkage cracks. The bulk modulus evolution depended critically on the clinker content of the examined blended cements. A practical outcome of this study is that blended cements with lower clinker content are in general at higher risk of plastic shrinkage cracking. This study was published in Cement and Concrete Composites:

Under conditions of rapid evaporation, capillary pressure consolidates the concrete more and much faster than in saturated conditions. In research on granular and porous materials, the relationship between the capillary pressure (related to the pore size) and the volumetric water content is given by the Water Retention Characteristic Curves (WRCC). Therefore, a method for determining the WRCC of fresh cementitious materials was developed, based on an approach already used for soils. Furthermore, a generalized consolidation equation was derived for cementitious materials by adding a chemical shrinkage term that leads to self-desiccation. The bulk modulus was determined also for the drying state by including the effect of the capillary pressure on the stiffness. A range of experiments on a plain mortar and a mortar with silica fume (to show the effect of the change in pore size) were performed, including DIC shrinkage measurements and pore pressure measurements by tensiometers. It was concluded that silica fume accelerates the solid percolation and the pore pressure evolution by increasing the initial bulk modulus, which also leads to higher horizontal shrinkage. This study was published in Cement and Concrete Research:

A novel method based on X-ray radiography was proposed for the detection of crack initiation in the ASTM C1579 standard. The poromechanics model mentioned above was used to simulate plastic shrinkage cracking with the boundary conditions of the standard. The calculated plastic shrinkage was used as input to a simultaneously running structural mechanics model to obtain the restraint stresses. Moreover, failure mechanisms were discussed and failure criteria were proposed. Based on this analysis, a safe capillary pressure limit was proposed to prevent plastic shrinkage cracking in the evaporation state. This work was submitted for publication to Cement and Concrete Research in 2018:

Finally, an investigation was performed in collaboration with LafargeHolcim about different passive methods for limiting plastic shrinkage cracking, namely shrinkage reducing admixtures (SRA), accelerators based on Calcium Silicate Hydrate seeding agents and curing compounds. In particular, the mechanism of action of the utilized methods is explained extensively according to the model explained above. This study was published in Cement and Concrete Composites: