The electron microscopy group at Empa carries out independet research projects and is involved in various collaborative research projects. Some research topics are of methodogical character, aiming at advancing imaging and analysis methods in electron microscopy, others are of applied nature where advanced characterization methods are employed to advance the understanding of the structure-property relation of novel functional (nano-)materials.

This research topic is funded by an ERC consolidator grant.

Complex functional oxides play a crucial role in many areas of advanced technologies. We are interested in investigating structural defects and their electronic impact on the functionality of epitaxial oxide thin films for device applications. In the case of multiferroic materials characterized by simultaneous magnetic and ferroelectric order, we have investigated the effect of substitutional doping in BiFeO3 thin films and revealed the spontaneous formation of a layered structure consisting of nonpolar Ca-doped rich regions and dopant-depleted ferroelectric regions. This alternation of layers with different ferroelectric states gives rise to a vertical polar structure exhibiting giant polarization gradients as large as 70 μC/cm2 across 30 Å thick domains. This novel pattern has been investigated combining several advanced scanning transmission electron microscopy (STEM) techniques at the atomic level, that is, HAADF/ABF and DPC. (for details: (Marco Campanini, Rolf Erni, Marta D. Rossell. For details: Campanini et al., Nano Letters (2018), 10.1021/acs.nanolett.7b03817)

We are also interested in various kinds of crystallographic defects (domain walls, antiphase boundaries, misfit dislocations and oxygen vacancies) as symmetry breaking at these positions may induce emergent behavior with properties that significantly differ from the bulk. For this purpose we employ atomic resolution imaging, mostly in STEM mode, combined with local electron energy-loss spectroscopy (EELS), energy-dispersive x-ray (EDX) spectroscopy, as well as off-axis electron holography. Additionally, the electronic structure information contained in the electron energy-loss spectrum is analyzed by comparing the experimental results with first-principle electronic structure calculations. This approach enables us to directly relate the atomic structure information with the electronic properties and thus to provide important information about the structure-property relation.

This research topic is funded by the Swiss National Science Foundation. 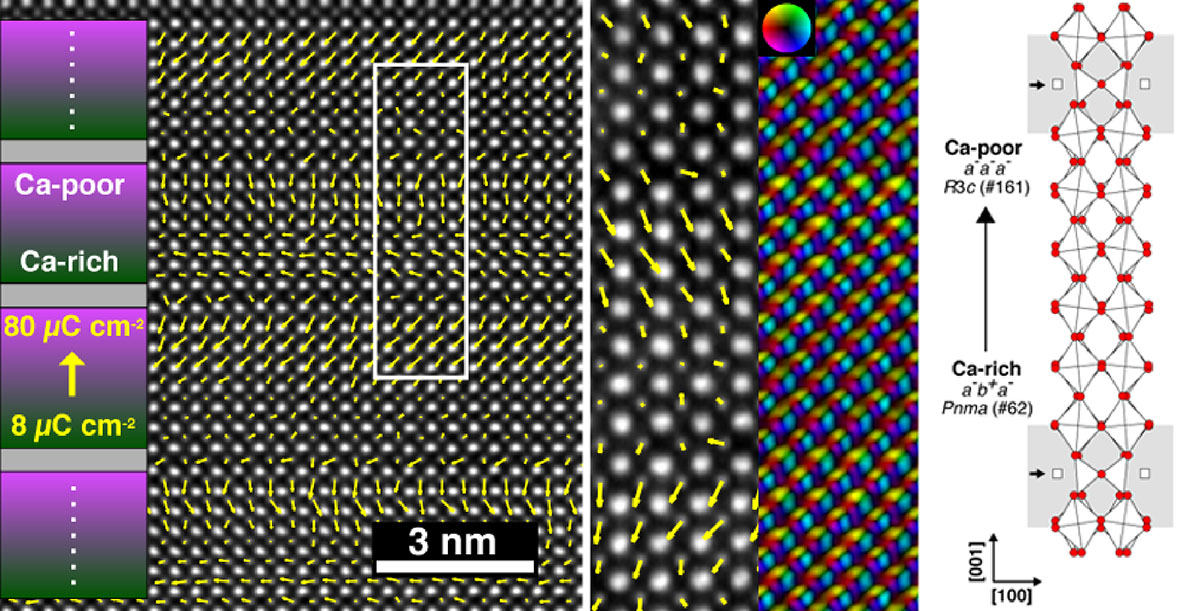 Analysis of the polar structure in a Ca-doped BiFeO3 thin film by HAADF- and DPC-STEM. The polarization map is superimposed to the high-resolution HAADF-STEM image showing the nonpolar Ca-doped rich regions acting as spacers between consecutive dopant-depleted ferroelectric regions displaying coupled ferroelectric states. A magnified view of the structure is presented together with the vector plot of the atomic electric fields, where the hue gives the field direction and the saturation is proportional to the vector modulus. The scheme shows the doping-induced distortion of the O-octahedron tilting pattern and the structural phase transformation from the Pnma to the R3c space group as the doping concentration decreases. (Marco Campanini, Rolf Erni, Marta D. Rossell. For details: Campanini et al., Nano Letters (2018), 10.1021/acs.nanolett.7b03817)

Novel technologies often require the implementation of new materials or of new ways of combining known materials with unprecedendet geometrical architectures. In this research topic, the electron microscopy group collaborates with other research groups on new semiconductor heterostructures. One sub-project concerns the development of an advanced X-ray detector based on Ge pillars grown on patterned silicon. Due to the large lattice mismatch between Si and Ge, Ge is heavily strained due to the epitaxial growth. The strain is partially plastically relaxed by the formation of dislocations and the formation of other structural defects, like e.g. stacking faults. Characterization of these defects  is crucual for advancing the understanding of their occurrence as a function of growth conditions and for developing the structure-property relation of the final device.

Another project of this research topic concerns the implementation of semiconductor nanowires. III-V semiconductor nanowires (NWs) are subject to intense research efforts due to their outstanding physical properties for electronic and optoelectronic applications. An important aspect of the synthesis of such nanowires on silicon concerns the density and type of defects as well as the effect of the crystal defects on the material's physical properties. As an example of our activities in this field of research, we highlight a study of the atomic configuration of combined stair-rod dislocations in GaAs NWs whose physical properties we inspected by density functional theory calculations based on the structural model obtained from the experimental data. See: N. Bologna, P. Agrawal, M. Campanini, M. Knödler, M. D. Rossell, R. Erni, D. Passerone, Stair-rod dislocation cores acting as nanochannels for monodimensional carrier transport in GaAs nanowires, Physical Review Materials 2 (2018) 014603. Download here.

This research topic has received funding from the Swiss National Science Foundation and CTI, the Commission for Technology and Innovation.