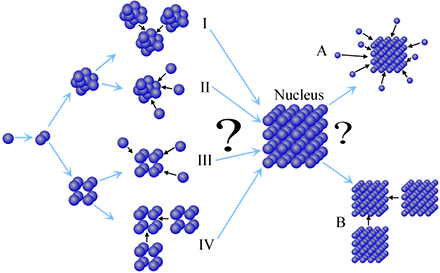 The goal of CLUSTER is to explore the fundamental processes which trigger the nucleation and growth of solids. Condensed matter is formed by clustering of atoms, ions or molecules. This initial step is key for the onset of crystallization, condensation and precipitate formation. Yet, despite of the scientific and technological significance of these phenomena, on an atomistic level we merely have expectations on how atoms should behave rather than experimental evidence about how the growth of solid matter is initiated. The classical nucleation theory is commonly in agreement with experiments, provided the original and the final stages are inspected qualitatively. However, the classical theory does not define what fundamentally constitutes a pre-nucleation state or how a nucleus is formed at all. CLUSTER aims at investigating the very early stages of crystalline matter formation on an unprecedented length scale. It shall explore the atomic mechanisms which prompt the formation of solids. Complemented by density functional theory calculations and molecular dynamics simulations, in-situ high-resolution electron microscopy shall be used to investigate the formation, dynamics, stability and evolution of tiniest atomic clusters which represent the embryos of solid matter. Firstly, we investigate the 3D structure of clusters deposited on suspended graphene. Secondly, we focus on cluster formation, the evolution of sub-critical nuclei and the onset of particle growth by thermal activation. Thirdly, using a novel liquid-cell approach in the transmission electron microscope, we control and monitor in-situ cluster formation and precipitation in supersaturated solutions. The results of CLUSTER, which will advance the understanding of the birth of solid matter, are important for the controlled synthesis
of (nano-)materials, for cluster science and catalysis and for the development of novel materials.

In our experiments with sub-nm sized clusters on amorphous carbon support films, we investigate, e.g., the behaviour of Pt atoms under electron irradiation at different temperatures. We observe a strong dependence of the structures of the clusters as a function of temperature, and find tiniest clusters with the bulk face-centered cubic (fcc) structure. We employ an unconventional fast scanning transmission mode which simultaneously images the structure and probes its stability by electron impact.

The animation of experimental STEM micrographs shows three Pt clusters. Inset is a model of the 13-atom cluster at the bottom. The 13-atom cluster shows the structure of one single fcc unit cell, missing one corner atom. During the recording, the cluster rotates twice, before two corner atoms detach and the cluster starts deforming, then it gets absorbed by the larger cluster.  (Denoised, animated in real time)

Gold particle growth by coalescence and by single-atom attachments with subsequent particle relaxation in ionic liquid at elevated temperature in dark-field STEM.

Ionic liquids have low vapor pressures and can be inserted into the high vacuum column of the microscope as free-standing, thin, liquid layers. In terms of their chemical properties, they are more complex than the solvents typically used in liquid-cell experiments. However, ionic liquids allow for high resolution observations in very thin liquid films, similar to gas phase experiments, but still in a liquid environment. Therefore, ionic liquids render insights complementary to results from liquid-cell and gas phase experiments and provide an additional, useful tool for studying particle nucleation and growth processes in situ at variable temperatures without being limited in resolution by electron transparent windows used in conventional liquid cells in STEM/TEM.

Gold nanoparticles particles nucleate and growth in a aqueous solution of HAuCl4 under electron irradiation.