On 22 March 2017 the Swiss Society of Engineers and Architects (SIA) awarded NEST a prize as part of its "Umsicht – Regards – Sguardi 2017" awards. The modular research and innovation building created by Empa and Eawag was acknowledged as providing a major contribution to the future design of Switzerland's living space. 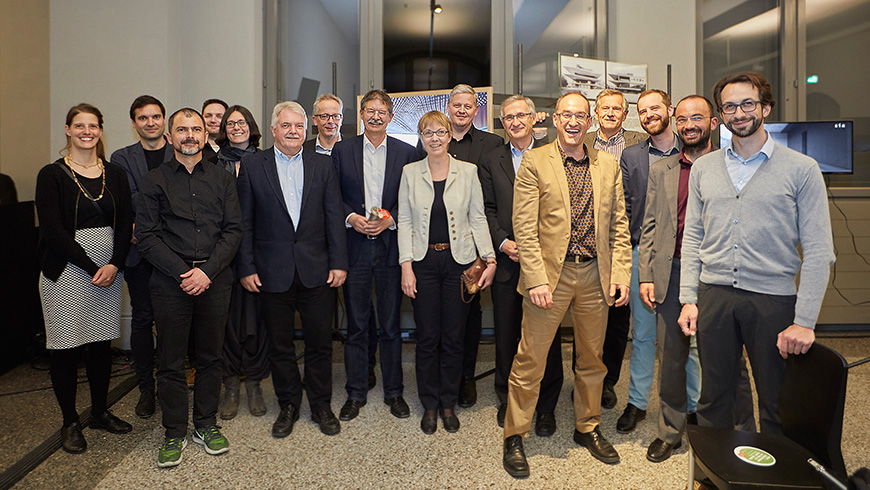 Photos: SIA/Reto Schlatter
For the fourth time last Wednesday, the SIA honored outstanding works of building culture characterized by their innovative power, design quality and social and environmental relevance. The award-winning projects included NEST, the modular experimental building by Empa and Eawag, which was opened in May 2016 in Dübendorf. NEST aims to accelerate the innovation process in the construction and energy sectors by providing research and industry with a platform, on which new materials, technologies, components and systems can be tested and validated under real-world conditions. The building consists of a central core and three suspended floors, onto which individual research and innovation modules are installed by plug & play. These units are residential and working areas – as well as living labs.

The SIA award jury praised the operational concept as well as the architectural and engineering aspects of NEST. As a "globally unique experiment", the jury's report accords NEST an important pioneering role in the efforts to improve the energy use of Swiss buildings. The report also highlights the "integral interdisciplinarity" and the strong cooperation between partners from research and industry.

As Strategic Head of NEST and Deputy Director of Empa, Peter Richner accepted the award at a ceremony at the Landesmuseum Zurich. "The NEST team is very pleased to receive this prestigious award. The recognition thereby given to NEST's chosen path to promote innovation in building construction and to accelerate the transformation of building engineering in Switzerland is a proud moment for us all and a motivation for the future," he said in his acceptance speech.

The architectural concept for NEST was devised by Gramazio Kohler Architekten. The Umsicht award is very special for Fabio Gramazio, "because it not only recognizes architecture as an isolated phenomenon, but focuses on the interdisciplinary interaction of various parties, without which such a radical and unique spatial concept could not have been created."

The concept is one of permanent change

NEST is a building that is constantly changing and is never really finished. The first two units, Meet2Create and Vision Wood, are now fully operational, as are the cross-units Energy Hub (ehub) and Water Hub. A new construction area was recently opened on the upper floor, in the north-eastern corner of NEST. A third unit has been under construction there since the beginning of the year – a fitness and wellness facility that is to be powered entirely by solar energy. The building approvals for the next two units also arrived in late February. These are SolAce, which focuses on energy retrieval from facades, and Digital Fabrication, which is to be realized by means of, among other things, robotic on-site assembly. Two more units, Urban Mining and HiLo, are currently being planned and will be added to NEST in late 2017 or early 2018.