Novel research in nanomechanics and nanostructuring requires specialised instrumentation, not all of which is available commercially. The microanalysis group within the Laboratory for Mechanics of Materials and Nanostructures has

We maintain research interests in the use of radiofrequency pulsed glow discharges, in the application of glow discharge analysis to thin films and to molecular materials, in the coupling of time-resolved mass spectrometric detection to pulsed discharges and in the use of plasmonic effects to enhance Raman signals. We have custom made instruments which improve the lateral spatial resolution of a glow discharge one hundred times (from several millimeters to tens of microns), which permit the time-resolved mass spectral analysis of molecular species in afterglowing plasmas and which allow SIMS measurements with spatial resolutions down to 10 nm.

Emission spectrum of the plasma after glow showing the strongest atomic lines of both the sputtered cupper and the argon carrier gas
Recent developments in instrumentation and in the range of applications expose Glow Discharge Optical Emission Spectroscopy techniques to new challenges in the physical and chemical basics of GD and in quantification. The dominant physical processes occurring in continuous glow discharges, such as ionisation and excitation are generally well understood, particularly for discharges in the noble gases (mostly argon). However, the instrumental development and application of pulsed direct current (dc)- and rf-GD has just started and research for instrumental optimisation and data evaluation is needed. Furthermore, many samples introduce molecular gases such as hydrogen and nitrogen into the discharge, and it is essential to know how these gases affect the ionisation and excitation processes, and hence the accuracy of the results. State of the art is therefore often qualitative and comparative analysis only, in particular in new application domains like ultra-thin films or biomaterials where accurate quantitative analysis would be most urgently needed. We study in particular pulsed radiofrequency glow discharges in view of their possible advantages for optical emission spectroscopy (GD-OES). The effects of a pulsed power supply on the sputtering are investigated and the effect on the emission yield for resonant and non-resonant emission lines are under investigation. The possibility of analysing heatsensitive non-conductive materials and layers through pulsed rf-GDOES is demonstrated. The work opens several subjects and questions for further research on understanding the plasma processes linked to analytical rf-GD-OES. The applications cover common industrial tasks such as heat treatments, studies of diffusion processes at interfaces, and electrochemical treatments of medical implant surfaces.

Top left: Nickel substrate with copper pin. Bottom left: Spectrum of the GDOE col-lected by the spectrograph at different height positions. Right: Reconstructed mono-chromatic images of GDOES from the original sample.
Glow discharge optical emission spectroscopy (GDOES) has gained increased interest for allowing elemental depth profiling with very high depth resolution, in the order of nanometers. On the other hand, the lateral resolution in GDOES is typically limited to the diameter of the sample surface ex-posed to the plasma, which is in the order of millimeters. A few studies have shown the possibility of obtaining laterally resolved information from within the sample surface exposed to the plasma, thus showing the possibility of obtaining three dimensional elemental maps from solid surfaces. To accomplish this one needs to obtain images of the sample GDOE at characteristic wavelengths of interest. At EMPA Thun, we have developed a push-broom hyperspectral imaging system for this purpose. This instrument allows obtaining one spatial dimension and the spectral dimension simul-taneously, while the remaining spatial dimension has to be scanned to gather the whole image. Ap-plications where the lateral heterogeneity is in the order of 50-100um should be within reach, in-cluding, among many others, analysis of composite materials or the simultaneous characterization of homogeneity of thin film deposition over large areas. This technique has already been applied successfully to the analysis of blotted protein maps.

GDOES qualitative depth profile of AZO film deposited on Si wafer by ALD. The visible emission in the plasma from the elements of interest is modulated via interferometric effects which allow obtaining the refractive index or erosion rate of the transparent thin film.

Several novel thin film (TF) solar cell concepts have transparent conductive oxide (TCO) films serving as a front contact. The electrical and optical properties of such films can be tuned by varying their composition. Zinc, as opposed to other typical elements used for conductive oxides, is a relatively abundant element thus Aluminium dopped Zinc Oxide (AZO) has great potential for widespread use in future cost effective TF PV concepts. We have shown that GDOES can be ap-plied as a fast and reliable measurement technique to simultaneously determine thickness, mean chemical composition and refractive index of homogeneous transparent AZO thin films with the use of a set of matrix matched standards. This is achieved by analysing the modulated optical emission signals due to optical interferometric effects taking place at the transparent TF and the highly reflec-tive substrate Si wafer. The accuracy of the determined refractive indices is just as accurate as ellip-sometry but not dependent on the correctness of complicated modelling assumptions related to the analysed mater. The technique has been applied successfully on AZO layers of different Aluminium content which were prepared by atomic layer deposition.

Glow discharge (GD) is a highly specialised source that especially meets the requirements for accuracy, simplicity and speed for content depth profiling and bulk analysis in both optical emission (OES) and mass spectrometry (MS). The pulsed radio frequency GD source has the potential for both elemental and molecular analysis of conductive and non-conductive materials. To exploit the information delivered by pulsed radio frequency (r.f.)-GD sources, fast sampling is required, and is available only through time-of- flight mass spectrometry (ToF-MS). Compared to optical glow discharge (GD-OES) instrumentation, a GD-ToF-MS system shows much simpler spectra, lower background signals and lower detection limits. The recently developed r.f.-GD-ToF-MS system is a successful combination of a commercial high-end glowdischarge instrument and an extremely fast and high-resolution time-of-flight mass spectrometer. This new instrument was applied to analyse conductive and non-conductive materials like anodic thin films. We could resolve 2-nm Cr makers in aluminium oxide layers and measure trace elements in ultra thin titanium oxide films. Furthermore, we show the potential of the pulsed mode to separate analyte species from elements originating from residual gas.

The image shows an example of a depth profile from a 10 x 10 micron area of a solid state laser device (sample courtesy of Dr A Sirbu, EPFL).

(SIMS) is an analytical technique that uses an energetic beam of ions to sputter a sample. A small fraction of the sputtered material is electrically charged, and these secondary ions can be collected and mass analysed. The strength of SIMS is not so much in quantitative analysis as for depth profiling and chemical imaging. The SIMS instrument at EMPA Thun is integrated into a dual beam SEM-FIB (Secondary Electron Microscope – Focused Ion beam) which allows excellent imaging of the sample, and very high spatial resolution SIMS measurements using the liquid metal gallium ion source primary beam (at some penalty to sensitivity compared to alternative primary ion beams). The limiting spatial resolution of the instrument is the spot-size of the primary ion beam which is about 5 nm. The use of a time-of-flight mass analyser allows all mass to charge ratios to be measured simultaneously.
The development work for this instrument was supported by the EC (part of the FIBLYS project, http://www.fiblys.eu/) with support from Tofwerk AG and Tescan a.s. 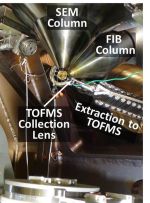 FIBSIMS. The AFM in SEM to measure crater roughness is not shown.

The focus of our TOFSIMS development work has been on a relative-ly low-cost versatile instrumentation module intended as an add-on to a standard high vacuum FIB chamber. Orthogonal extraction provides a high effective duty cycle and avoids the need to pulse the primary beam or to use monoisotopic gallium, thus no changes to the FIB hardware are necessary. When SIMS measurements are not required, the front part of the extraction ion optics simply clips off, thus allow-ing the full range of sample sizes to be used by the FIB. The prototype instrument has useful ion yields while depth profiling with 20 keV gallium primary ions and also chemical images with lateral resolutions of better than 40 nm are easily achieved.

In the subsequent EC-funded UnivSEM project (http://www.univsem.eu/), the sensitivity of the SIMS instrument was dramatically increased and full integration with atomic force microscopy in the electron microscope chamber achieved. This latter allows the depth in SIMS depth profiles and 3D images to be calibrated, and also allows the roughness (which affects depth resolution) to be determined accurately. The file AFM-SIMS.pptx includes video showing this.

Depth Profile of Computer Hard disk. Full scan and zoom into outer layer and image of a burn spot

Glow-discharge optical emission spectrometry (GD-OES) allows fast compositional depth-profiling from the nm range up to several 100 um in depths. The depth resolution of this technique is of a few nanometres for thin layers, but increases for thicker layers to reach a few percent of the total sputtered depth. The major advantages of the technique are its speed and ease of use. The spatial separation of the sputtering processes and the excitation/ionisation processes leading to the signal detection result in reliable quantification procedures, compared to surface analytical tools. A further advantage of GD-OES is its ability of qualitatively determining the hydrogen content in the sample. Though GDOES offers an excellent depth resolution it does virtually offer no lateral resolution, because the analysis area is at the best of a few mm2.