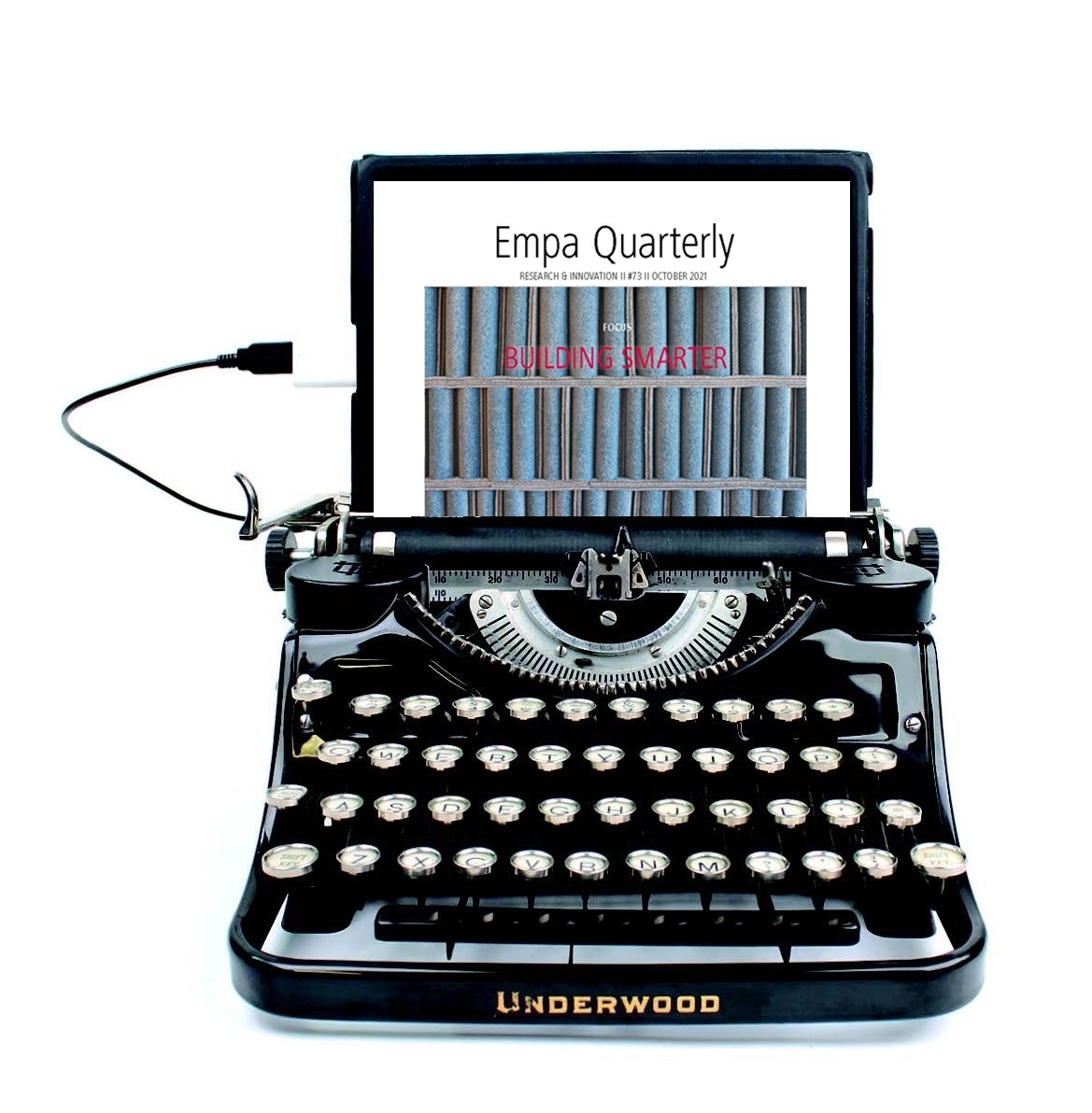 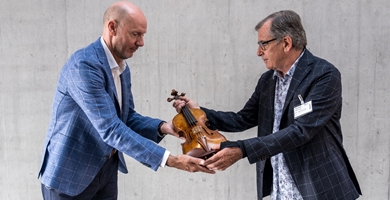 Biotech violin is coming home
Walter Fischli (right), President of the Board of Trustees of the foundation of the same name in Allschwil (BL), recently handed over the “Caspar Hauser II” Mycowood violin to Empa representatives. The foundation supports a long-standing research project at Empa, in which biotech violins are being developed: With the help of a white rot fungus, the team led by Empa researcher Francis Schwarze has succeeded in developing a process, in which fungi break down wood cells in a very specific manner – and in the process changes the acoustic properties of the tonewood. In this way, the Empa scientists produced so-called Mycowood that gave the “Caspar Hauser II” its body. The instrument is an exact copy of a Guarneri master violin from 1724, and initial comparative acoustic analyses of the original and its biotech copy have already proved promising. Now the Mycowood instrument has been returned to its “birthplace”. But only for a short time: In order for the “Caspar Hauser II” to develop a unique soul in addition to its extraordinary body, the instrument will be allowed to develop its sound through frequent performances in the coming years. To celebrate the handover, the virtuoso violinist Irina Pak from the Tonhalle Orchester Zurich played on the “Caspar Hauser II”. The violinist elicited both contemporary sounds as well as baroque melodies from the time the original violin was built from the new violin. 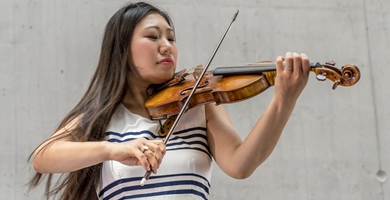 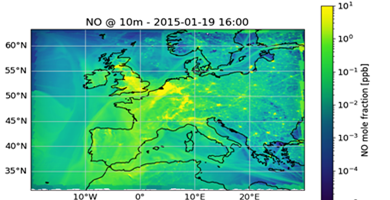 Supercomputers for climate modelling
Since July, the Swiss Platform for Advanced Scientific Computing has been funding a three-year project led by Empa researcher Dominik Brunner – on a major challenge for computational models: climate. Atmospheric processes with their interactions and consequences for global warming or air pollution have long since pushed conventional computers to their limits – and more powerful architectures into play. GPUs (Graphic Processing Units) with many processors calculate massively in parallel, but they require different programming. With the HAMAM project, the team aims to make two particularly computationally intensive extensions of the ICON weather and climate model fit for GPUs: the ART module for air quality simulations and HAM for the interactions between aerosols and climate. These models will be implemented and tested on the supercomputer Piz Daint at the Swiss National Supercomputing Center in Lugano.
>>>> 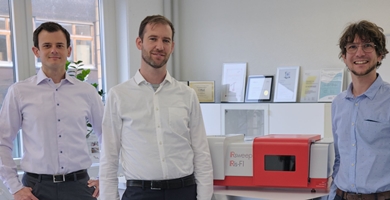 Spin-off on the road to success
On track in just a few years: IRsweep was founded in 2014 – as a spin-off from Empa and ETH Zurich. In May, Sensirion, a manufacturer of digital microsensors and -systems, took over the young company with its eleven employees. Its laboratory spectrometers with frequency comb technology in the mid-infrared range are used in research and development to detect rapid chemical reactions in the shortest possible time. IRsweep instruments are already in use in Europe, North America and Asia. In the long run, this technology might be used to create low-cost sensors that can detect traces of gases in the environment, for instance.
>>>> 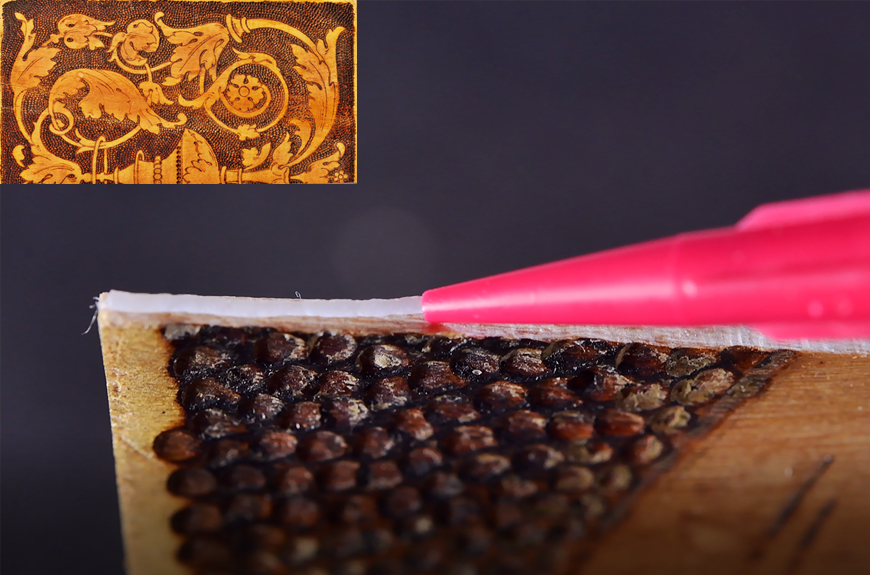 Preserving historic wooden works of art for future generations is anything but trivial. The 19th century pyrography on a thin lime wood panel pictured here is completely broken apart; the thumbnail in the top left corner shows merely one half of the artifact. Researchers at Empa and the University of the Arts in Bern have developed a cellulose glue that joins the lime wood together in a stable and at the same time gentle way. This is because the wood-based adhesive does not damage the artwork and yet defies the often harsh environmental conditions of cultural assets in old castles or damp church cellars. Fotos: Karolina Soppa, HKB
>>>> 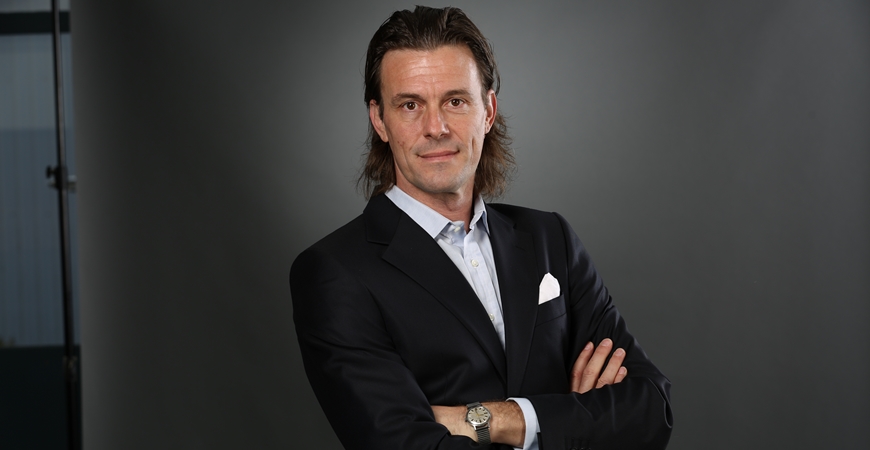 Thinking outside the box

If you know your material, you can make the most amazing things out of it: an adhesive from cellulose to restore old works of art, a cancer treatment with fewer side effects from metal oxides, or a low-cost thermal imaging camera from ultra-thin multi-layer coatings.
All these are clever ideas, developed in one of the 30+ Empa labs, which have one thing in common: Their inventors dared to venture outside their own disciplines and joined forces with colleagues with entirely different backgrounds.
In short, they have thought outside the box – in the most literal sense. Because this is the only way to create something really new, i.e. what constitutes a true innovation at its (word) core.
Even if we “just” build, we try to gain insights for novel solutions. For instance, through an experimental borehole field as a sustainable seasonal heat storage system for the winter, which we are currently installing under our new laboratory building at a depth of around 100 meters, or in the new NEST unit Sprint, which was created entirely from used and recycled materials.
So much creativity often takes time, i.e. money.
That is why we have decided to increasingly approach private donors. We will report regularly on how we use the funds we raise, starting with an article on a process for making concrete much more environmentally friendly. 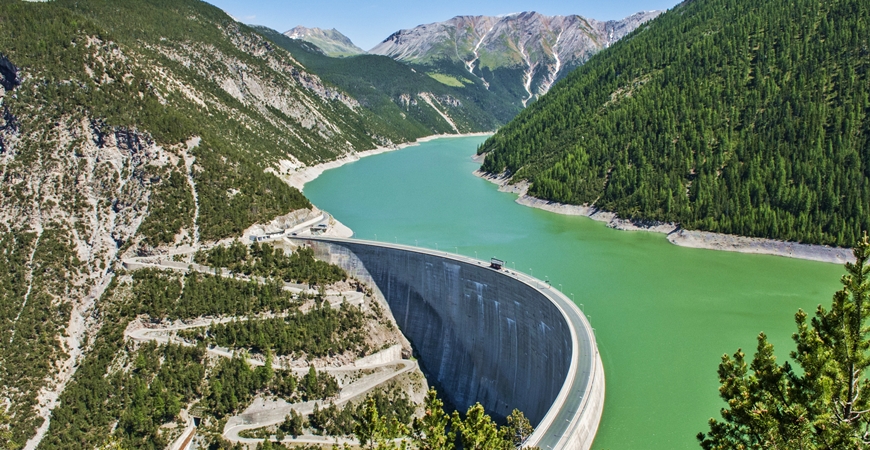 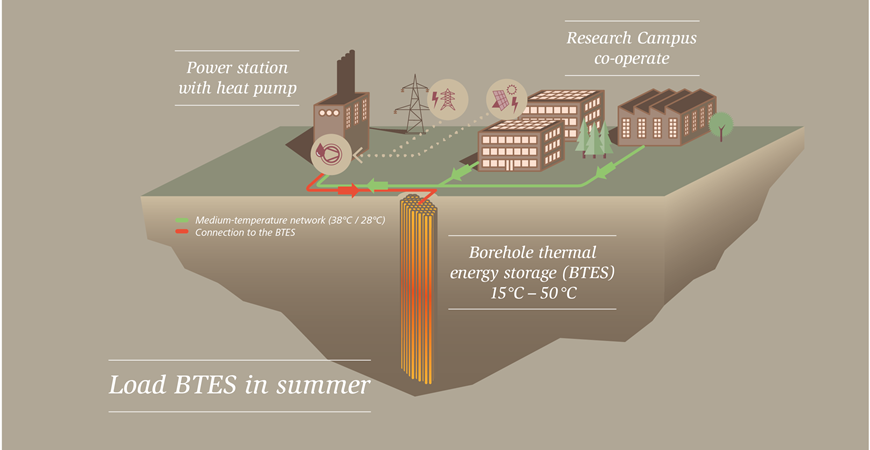 Heat storage in the deep

In Dübendorf, Empa is currently building a new, future-oriented research campus, co-operate, where groundbreaking research is conducted – and which is itself an object of research.
>>>> 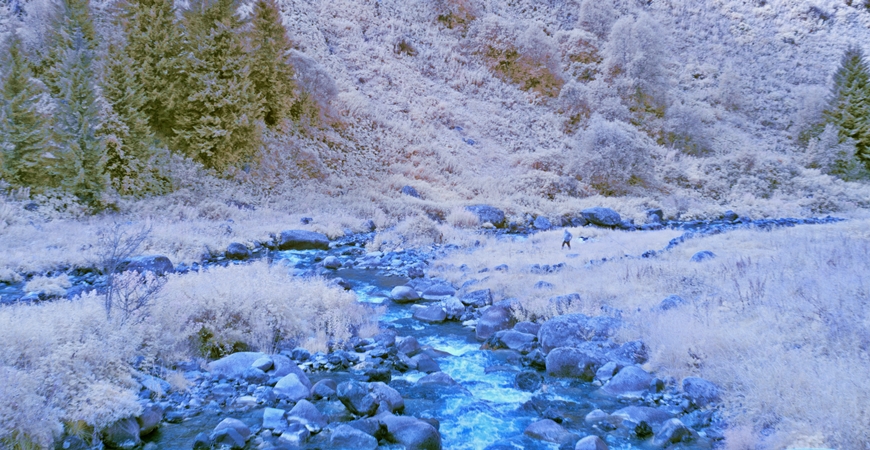 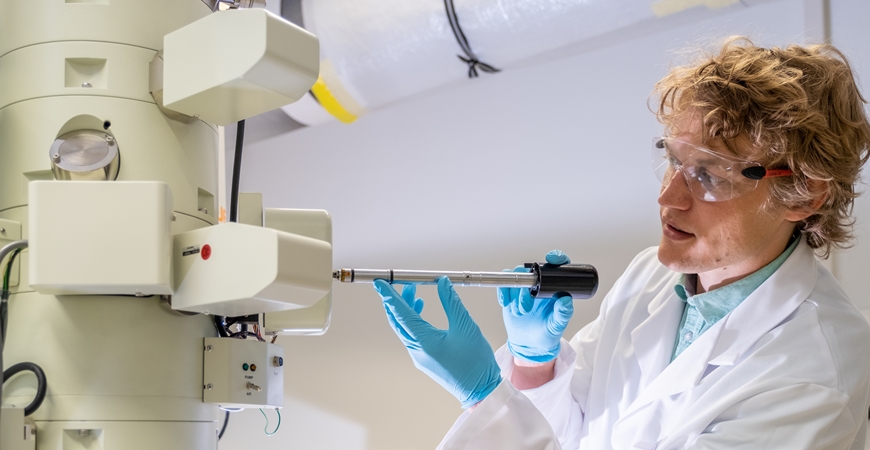 Radiation therapy is one of the cornerstones of cancer therapy. However, some types of tumor respond little or hardly at all to radiation. If it were possible to make tumor cells more sensitive, treatment would be more effective and gentler. Empa researchers have now succeeded in using metal oxide nanoparticles as “radiosensitizers” – and in producing them on an industrial scale.
>>>> 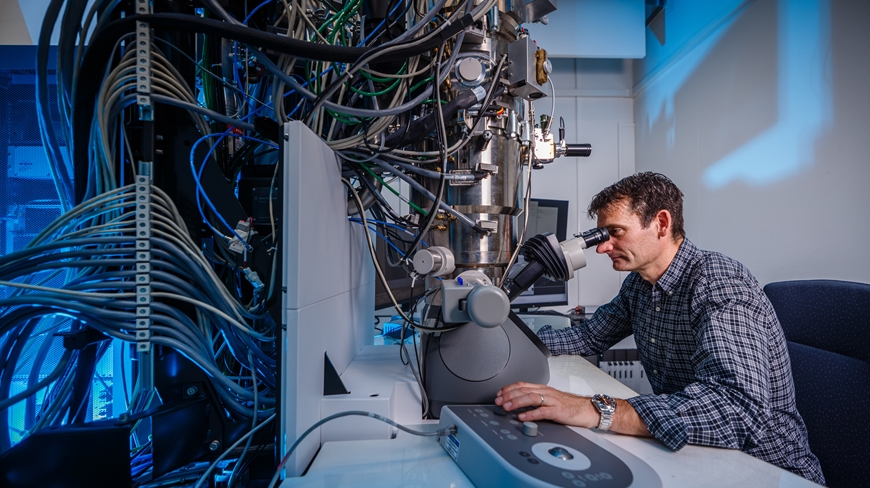 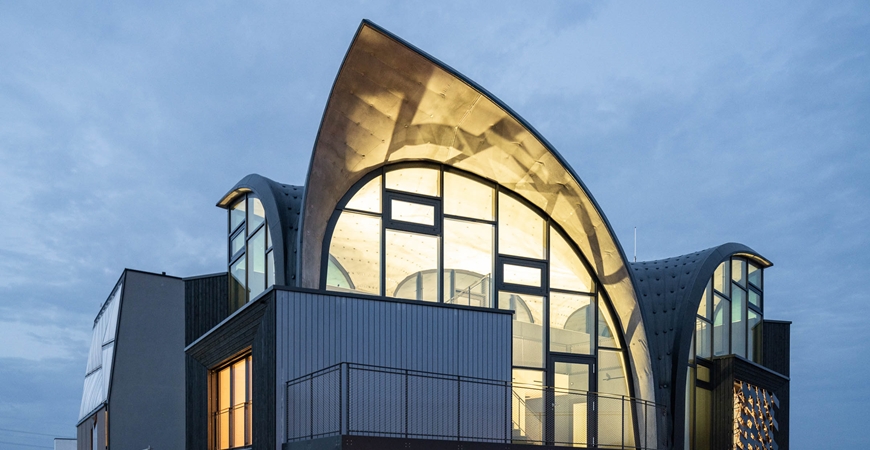 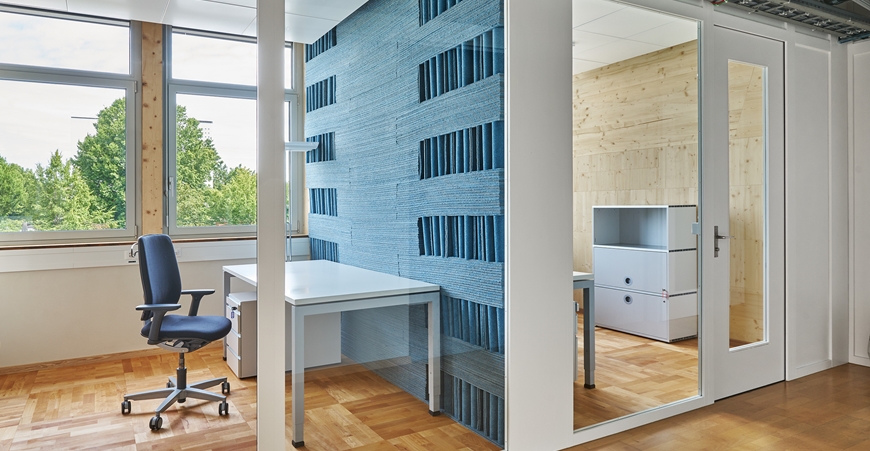 Insulation webs are essential in aluminum window profiles and facades for good thermal insulation. Empa researchers and their partners have been working for some time on a novel "sandwich" product with an environmentally friendly filling: recycled material from PET bottles. Now the market launch is approaching – with good prospects of success.
>>>> 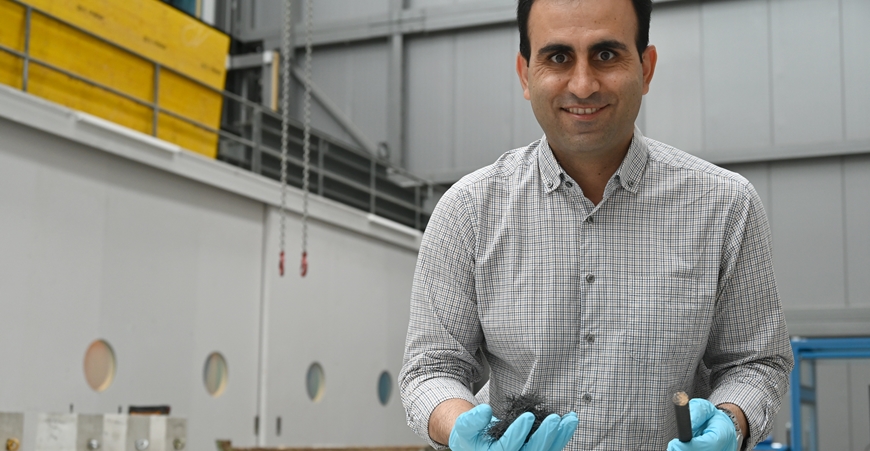 Materials to protect the climate

Scientists are visionaries. Sometimes their ideas go much further than an industrial partner is willing to go. The Empa Zukunftsfonds aims at supporting such visionary projects, where, despite high risks – or precisely because of them – , breakthrough successes are to be expected.
The latest example is a research project on prestressed high-performance concrete, which can now be started thanks to funding from the Ernst Göhner Foundation.
>>>> 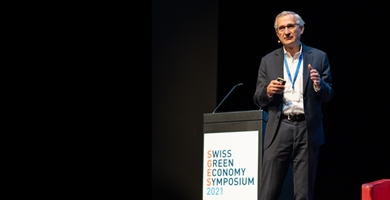 SGES with Empa expertise
„Sustainability needs ingenious minds”: Such was the motto of the Swiss Green Economy Symposium held in Winterthur in September with experts from business, research and politics. Empa CEO Gian-Luca Bona brought the institute‘s perspective to an event on sustainable energy production and the procurement of mineral resources. In his „Changemaker Impulse” talk, he outlined the need for more – and different – materials for renewable energy production, along with the need to harvest, store and use energy in an environmentally friendly way for the sustainable development of our society. Through specific examples such as printed, biodegradable batteries, the audience learned first-hand what Empa researchers are contributing to this filed. Anna Krutikov, Head of Sustainability at Glencore, Christoph Wiedmer, Co-Managing Director of the Society for Threatened Peoples Switzerland, and Monica Rubiolo, Head of Trade Promotion at the State Secretariat for Economic Affairs (SECO), then joined Bona for a panel discussion.
>>>> 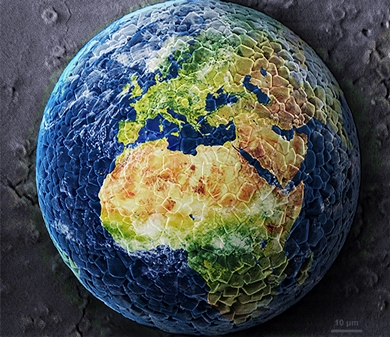 Tiny globe made of ceramic
At the Swiss NanoConvention in June, not only posters and a startup company received awards, but also pictures: a tribute to successful presentations of nano research. The jury awarded second place to Empa researcher Evgeniia Gilshtein – for a colored globe one-tenth of a millimeter in diameter. The sphere‘s irregular grain structure is achieved by a flash lamp annealing process, which lasts only about two milliseconds. The material of the sintered sphere is initially comprised of micron-sized alumina particles and nanometer-sized iron oxide particles mixed in water. The result inspired Gilshtein to use image processing to turn it into our blue planet – fitting for 2021, which the UN has declared the „International Year of Peace and Trust”.
>>>> 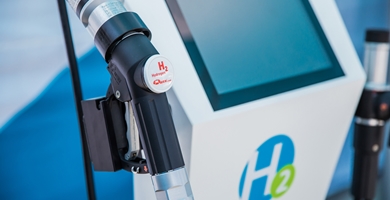 Fueling up with hydrogen - at Olma
What will the fueling station of the future look like? With an increasing expansion of photovoltaic systems, there will be a surplus of renewable energy in summers that can be converted into hydrogen – a fuel that is particularly suitable for trucks and other heavy vehicles. Together with partners, Empa will be demonstrating how hydrogen can be produced and refueled at a stand at the OLMA in St. Gallen from 7 to 17 October. Besides information worth knowing about sustainable fuels and answers to frequent questions, visitors will also have the opportunity to try their hand at it themselves – with the model of a fueling station and the Hyundai NEXO Fuel Cell car. In addition, an e-bike from Linde that runs on H2 will also be on display.
>>>>