Insulation webs are essential in aluminum window profiles and facades for good thermal insulation. Empa researchers and their partners have been working for some time on a novel "sandwich" product with an environmentally friendly filling: recycled material from PET bottles. Now the market launch is approaching – with good prospects of success. 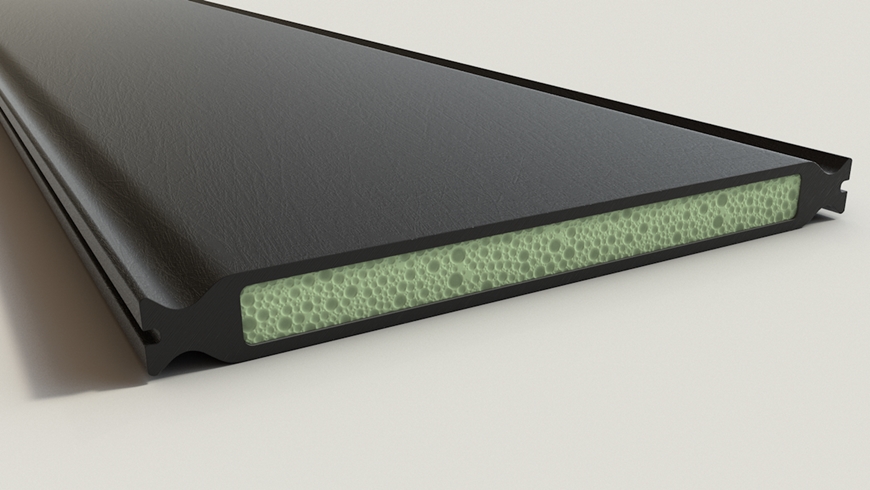 Ready to install: the Alpet insulating web made of plastic. The greenish color of the filling material comes from the use of PET from recycled bottles. Image: Hochuli advanced

They are better hidden than screws, of which you can at least still see the heads. But they are just as ubiquitous: Insulation webs are stuck inside aluminum and metal profiles for windows and facade glazing – as thermal separators between the outside and inside, because otherwise cold or heat would flow unchecked through the metal frames. An inconspicuous component, then, that is becoming even more important with global warming and the need to reduce CO2 emissions. 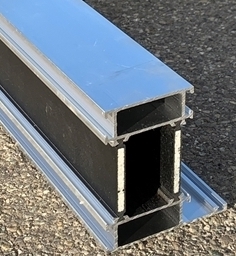 An early prototype of the insulation bar. Image: Hochuli advanced

But although it has been established for more than four decades, the insulation web has potential for improvement. An Empa team led by Michel Barbezat and Giovanni Terrasi from the Mechanical Systems Engineering lab is working on a new type of product – together with experts from the metal construction company Hochuli in Wigoltingen, which has founded its own spin-off named "hochuli advanced" to commercialize the new developments.

The highlight of the "Alpet" insulation web: Inside the glass-fiber-reinforced plastic is a foam strip made of polyethylene terephthalate – PET, in other words, from recycled bottles.

Numerous air pores within this layer insulate efficiently: The thermal conductivity of the prototypes averages around 0.1 W/mK, depending on the web width – far less than a standard insulation web made of another polymer, polyamide (around 0.25 W/mK), and also significantly lower than high-end products available today.

A simple approach, as it seems at first glance – but to turn this seemingly simple idea into a viable product, a lot of conceptual work was required as part of an Innosuisse-funded project. Take the production method, for instance: After testing different processes, the experts decided on so-called extrusion, in which heated, molten plastic is pressed through a slot as a soft dough and shaped in this way – around the strip of PET. But that in turn raised questions, for example about the proportion of air voids in this "filling".

Under the microscope: The largest pores (black) have a diameter of about half a millimeter. Image: Hochuli advanced

"As many as possible" is the answer, in order to achieve a high insulating effect. Only: "Too many" would have jeopardized the stability of the prepared PET strand, because its encasement with the black plastic takes place at temperatures of up to 300 degrees and under high pressure.

The researchers also adapted the thickness of this "sheath" to the necessities: as thin as possible for a good insulating effect – but thick enough so that the web would later also withstand mechanical loads, including the post-treatment of the finished overall profile, such as powder coating or anodizing.

From numerous samples, the developers distilled seven variants for testing – altogether an insulation web about 1,000 meters in length – and from these the final prototype as the basis for the finished products. An important step in the production process was also achieved along the way: The web welds virtually by itself due to the heat – without the need for another "seam" to be glued.

"This is already a big advantage," says metal construction engineer Frank Hochuli from Empa's industrial partner. "There are no local weak spots where material could come off. And the fewer steps, the cheaper the product."

A lengthy process that paid off in the end, as Empa's Michel Barbezat confirms. "Technically, we certainly have a very good chance," he says. The measured values and the product, which can be easily recycled despite the use of two different materials, are already convincing. And the experts are also confident about the necessary long-term stability over many years, which his team tried to estimate with experiments using the innovative Stepped Isostress Method (see box).

Barbezat admittedly sees a challenge in convincing a large manufacturer of window profiles to cooperate, which produces and sells profiles for installation companies for windows and facades. "After all, compared to large companies, we are 'nobodies,'" he says. So to win customers, the team also needed an independent blessing from above – so the partners sent their "Alpet" insulation web to the ift testing institute in Rosenheim, Bavaria, which has been a reference in the industry for decades.

The German experts not only repeated the Swiss tests, but also subjected the prototypes to fire and fracture tests as well as other stresses – for example, to invisible microcracks after 1,000 hours of storage in oil or light acid, or to strong tension in the transverse direction.

According to Frank Hochuli, official certifications for fire behavior, static load-bearing capacity and for thermal insulation have already been issued.

What would be the effect of the new insulation web in an entire window, including glass panes, aluminum profiles, seals and all the other components and details? Compared with today's high-end designs, Hochuli estimates that the thermal insulation in a new office building, for example, could be improved by up to twenty percent. And because the web with its "dovetail" as a mounting connection is compatible with all common systems, existing solutions can be upgraded relatively easily – for example, for the rather high requirements according to passive house standards. "It takes a lot of effort to do that with aluminum profiles these days," he says, "our system would certainly make it easier."

Detailed tests are then also carried out by the manufacturers themselves, in their own laboratories with their own profile systems. Talks on this have taken place; the first customers are already starting trials. "I am definitely optimistic!" says Hochuli. "Otherwise, I would hardly have founded a new company to bring our idea to the market." Nevertheless, the future path will not be a solo effort: Empa's experts will continue to support the insulation web with their know-how. 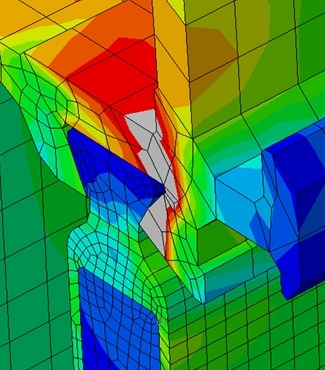 Simulation of the load on the new web, but still using data with a different material for the cladding. Image: Empa

How does a plastic component deform over a period of 30 or more years – under continuous load and large temperature differences? Common creep tests in the laboratory over 1,000 hours under combined thermal-mechanical loads do not allow any serious statements to be made.

In order to be able to make long-term predictions, however, new methods have been developed and refined in recent years, including the Stepped Isostress Method (SSM), which Empa experts applied to the new insulating web.

In simple terms, the deformations from numerous individual tests with increasing loads are added up to form a master curve that provides information about longer periods of time.

This procedure can also be carried out with a single measurement performed with gradually increasing loads – which makes it easier to investigate critical temperature ranges at the same time.

Homepage of the company Hochuli advanced in Wigoltingen