SAM is an anatomically-formed manikin with the body dimensions of an average male adult. The manikin has limbs which can be moved and the ability to sweat.

The inner skeleton of SAM, which is suspended from a weighing system, is covered by 26 attached shell parts (sectors), each of which is heated separately and has its own surface temperature sensor. In this manner the body surface of each part can be heated either at a constant temperature or with a constant power.

Distributed over the entire body surface are 125 sweat outlets which are supplied by a reservoir containing distilled water. Using internal micro valves, both vapor and liquid sweating can be simulated over the whole body or over chosen body parts, with variable sweat rates from 0 to 4 l/m²·h. The latter corresponds to a person undergoing a heavy workload.

Joints at the shoulders, elbows, hips and knees permit SAM to be articulated at temperatures above 0°C. The wrists and ankles are connected to external drive assemblies, which can move through various curves under computer control. Based on kinetic data, realistic movements can be programmed for the measurements, with variable speeds (walking speed 0  to 2.5 km/h). The environmental conditions (temperature, wind and humidity) can be adjusted. 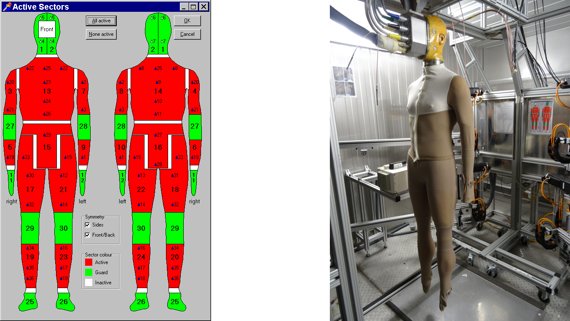 If you have any queries regarding the suitability, cost or time frames associated with this testing, please do not hesitate to contact us.