Among the deformable polymers the “Electroactive Polymers” (EAP) showing a mechanical effect (force, deformation) when electrically stimulated were strongly focused as Smart Materials during the last years. This material class can be subdivided further into the Ionic respectively Electric EAPs according to the way of their activation. In Ionic EAPs the activation forces are generated by displacing ions whereas in Electric EAPs the effect is induced by shifting only electrical charges. A number of Smart Materials can be found for both groups, the Ionic resp. Electric EAPs. The group of Ionic EAPs includes several different Smart Material candidates.
Among the electric EAPs especially the dielectric electroactive polymers are functional materials that have promising potential due to their inherent compliancy and good overall performance. The combination of large deformation, high energy density, good efficiency and high speed of response is unique to dielectric EAPs (=polymer transducer). Furthermore, they are lightweight, have a simple structure and can be easily tailored to various applications.
The basic unit of dielectric polymer actuators consists of a dielectric elastomer film (e.g. silicone, acrylic, polyurethane, natural rubber) sandwiched between two compliant electrodes. Dielectric electroactive polymers are (visco)-elastic, incompressible rubber like materials with a high dielectric constant. In this arrangement, the polymer acts as a dielectric of an electric and compliant capacitor. When an electrical voltage is applied between the electrodes, an electrostatic field in the dielectric occurs from the charges on the electrodes which produces a Maxwell stress state in the material. As a result, the polymer material is enlarged elastically in the plane and contracts in the electric field direction. As soon as the voltage is switched off and the electrodes are short-circuited the capacitor contracts back to its original shape. By arranging several actuator layers in parallel, the resulting force can be multiplied and the stiffness of the created material can be increased. When the actuators are combined in series, the arising displacement becomes larger.

According to [1] the equivalent total electrode pressure Pelectrode [N/m2] is proportional to the applied voltage U [V] in square divided by the thickness of the polymer film d [m] (equivalent to the distance of the electrodes) in square:

Many experiments have shown an essential increase of the electric breakdown strength of the film when it is pre-strained which results in a high field strength (<200V/µm) and therefore in high actuation performance. To maintain the DE film in this biaxial pre-strained state a support structure is needed. Obviously, with pre-strained DE actuators the design of the support structure is one of the key issues and leads to many design constraints. Although high actuation performance has been demonstrated the necessity of mechanical pre-straining of the film has emerged as main drawback with respect to actuation mode (expansion at actuation), insufficient reliability and unpredictable mechanical long term behavior. In order to avoid the resulting unsatisfactory short service lifetime, the multy-layer contractive transducer in stack design has been developped, using the contraction mode when voltage is applied (Fig. 2 left). Different design and functionality has been demonstrated with good reliability and actuation performance, where no external (or internal) strain supporting structure is necessary.

First contractive out-of-plane motion of the actuator has been demonstrated based on the folded and helical design in [3]. This actuator consists of a single strip of an elastomer that is first coated with compliant electrodes and then folded up, so as to form a monolithic compact body. The folded structure is finally ‘sealed’ with a thin coating made of the same elastomer used for the strip. Applied voltage between the electrodes causes a thickness squeezing of the entire elastomeric layer which results in an axial contraction of the overall structure (10% at 100V/µm). The basic design of the stack configuration has been first demonstrated in 2002 for electrostatic tactile displays with high structural compliance [4]. When a voltage is applied between neighbouring electrode layers of this device, the actuator stack contracts and the stimulator tip will disappear below the surface of the device.
In order to make the EAP technology suitable for a wider range of potential application EMPA has investigated the new multi-layer stack actuator with contraction motion and tension force capability when activated [5]. This contractive actuator in stack configuration currently represents the most advanced and most promising design for DE transducers and represents Empa’s main research- and development activities in this field. This device consists of a large number of stacked thin dielectric film pieces which are coated with compliant electrodes. The electrostatic field induced actuation force and displacement is normal to the plane of the electrode and dielectric film. The as obtained contraction of the actuator can be used to drive the device under a specific external service load. The design of the stack actuator is based on a series of compliant capacitors electrically connected in parallel with alternating polarities of each layer. Therefore the actuation voltage has to be applied on two separated compliant electrodes addressing the associated conductive layers. In this configuration the actuator can directly turn electric energy into mechanical work.
As a matter of fact the dielectric film (sandwiched between two electrodes) acts as a “spacer” and does not take any tensile stress in planar direction, which is an important beneficial issue concerning strength and fatigue behaviour of the film. Electrically conductive nano particles are deposited as electrodes (very thin and compliant electrode layer). 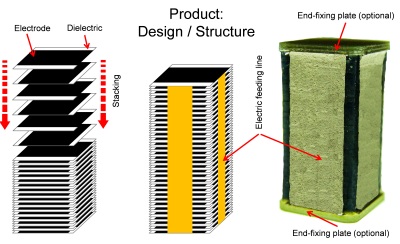 Depending on the thickness of each layer (which is in the range of 15-50um) the number of layers results based on the given actuator length. For reliable operation a maximum electro-static field of 60-80V/um (depending on the material stiffness) is recommended. This results in a maximum activation voltage between 800V to 1500V.
The EAP stack fabrication process is complex and still represents the main challenge for producing robust EAP stack transducers. The stack polymer transducer represents the main research and development activities at Empa. In order to overcome the limited practical implementation due to the absence of appropriate manufacturing processes with high precision and repeatability EMPA has developed a novel processing technology based on a layerwise alternate coating of very thin DE and electrode layers.

Fig. 3: Design / shape of the electrodes and stacking of the layers (left), forming the final actuator (centre and right)

In order to turn this technology into commercial products the Empa spin-off company Compliant Transducer Systems (ct-systems, gabor.kovacs@ct-systems.ch) has been established in 2011. CTsystems is highly specialized for manufacturing stacked dielectric transducers in fully automated mode and has developped the most advanced processing facility in this field.