A large number of metallic structures in civil engineering (such as road and railway bridges, offshore structures, pipelines, wind turbines, communication towers and mining equipment), aerospace and mechanical engineering (such as aircrafts, ships, trams and trains) are aging. Most of these structures are subjected to cyclic loading. It is estimated that fatigue contributes in about 90% of all service failures in metallic components. The increasing service loads and harsh environmental conditions make these structures even more vulnerable.
Sustainability is defined, according to the Eurocode EN 1990 (Basis of Structural and Geotechnical Design), as the “ability to minimize the adverse impact of the construction works on non-renewable resources in the environment, on society, and on economy during their entire life cycle”. Strengthening of existing structures can help to prolong the lifetime of the structures without major construction works (e.g., no need to demolish of the old structure and no need to build a new one). For example, for the case of old bridges, demolishing and reconstructing of old bridges requires quite a lot of material, planning, structural works, transportation and energy, which may have negative impacts on the environment and lead to an increased CO2 emissions. In addition, many of the old bridges are often historic (with national and international importance) and demolishing them may have adverse cultural or economic impacts on the surrounding environment (e.g., landscape change and less tourist attraction). Therefore, strengthening of existing structures can increase their service lives and minimize the adverse impacts of the (re)construction works on the environment, society, and economy, which may ultimately result in an increased sustainability [Ghafoori 2019]".
SUMS Research Topic aims to increase the sustainability of existing metallic structures by increasing their life-time using new advanced materials and innovative technologies.
Advanced materials, such as carbon fibre-reinforced polymer (CFRP), shape memory alloy (SMA), and etc. are used in the SUMS Research Topic to increase the sustainability of metallic structures. “The CFRP materials are composites with high strength to weight ratio, non-corrosive and have a superior fatigue performance. It has been shown that the CFRP composites can enhance the fatigue behavior, stiffness, ultimate-load, torsional and shear capacity of metallic members. Moreover, SMAs are a new class of structural metals, which are intelligent and have the capability to recover their shape after a permanent deformation at room temperature followed by a subsequent heating and cooling. It has been shown that SMAs can substantially increase the service life of metallic members” [Ghafoori 2019].

An updated list of recent publications in this Research Topic can be found here on Google-Scholar and Researchgate. A number of pictures and videos related to CFRP strengthening of different bridges can be found in Video/Photo Gallery A novel iron-based shape memory alloy (Fe-SMA) with high pre-stressing capability has been developed at Empa. Due to its relatively high recovery stress, the main application of the alloy is pre-stressed strengthening of civil structures.

In this project, the basic material behaviour at elevated temperature is investigated with steady-state tensile tests at 25 °C, 200 °C, 300 °C, 400 °C, 500 °C. 600 °C, 700 °C, 800 °C and 900 °C. Furthermore, transient tests (including total deformation tests as well as creep, and failure tests) are conducted on activated (prestressed) Fe-SMA samples to investigate the behaviour of Fe-SMA subjected to fire exposure. Finally, transient tests on non-activated specimens are performed. 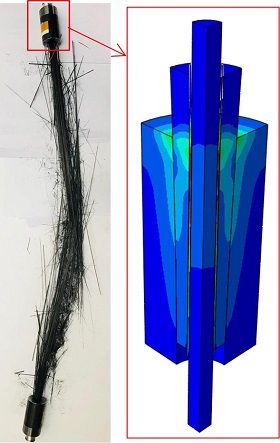 Mechanical post-tensioning (PT) anchors are used for prestressing structures or components, such as concrete girders, cable-stayed bridges, post-tensioned walls, etc. Steel tensile elements such as wires, strands and bars, which are often utilized in post-tensioning systems, suffer from fatigue and corrosion problems. In this project, application of carbon fiber reinforced polymer (CFRP) rods, as an alternative prestressing method, is suggested, due to their light weight, high tensile strength, as well as high fatigue and corrosion resistance. A new mechanical for prestressed CFRP rods is developed, consisting of a steel barrel with a conical hole and three wedges that are in direct contact with the CFRP rod. The load in the anchor system is transferred purely through the friction (without using any adhesive). A series of static and fatigue tests, for the first time, were performed according to the Guideline for European Technical Approval of Post-Tensioning Systems (ETAG 013). 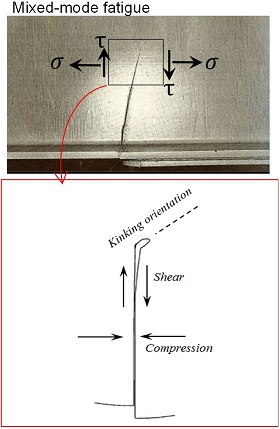 The majority of the existing fatigue studies on steel structures were based on tension testing of simple plates or done bone samples in tension (mode I). In reality, however, the actual loading on steel elements is more complex and is often a combination of tension, bending, shear and torsion. Connections, rivets holes and welding lines are the most fatigue crack-prone components of railway bridges. When these components are subjected to complex loading cases, the initiation and propagation phases of fatigue cracks are normally based on mixed-mode fatigue behavior and not simply on mode I behavior, which was the focus of past studies. For more details, see here. Shape memory alloys (SMAs) are materials that have the capability to recover their shape (after they have been deformed at a certain characteristic temperature) by a subsequent heating and cooling process. In general, the shape memory effect (SME) in Fe-Mn-Si alloys (also called iron-based or Fe-SMAs) is a result of a stress-induced phase transformation from a parent γ-austenite (fcc - face-centered cubic) phase to an ε-martensite (hcp - hexagonal close-packed) phase at ambient temperatures and its reverse phase transformation (ε-martensite to γ-austenite) upon heating at high temperatures (Ghafoori et al. 2017).
Fe-SMA materials can be used for prestressed strengthening of metallic members. Fe-SMA has a considerable recovery stress and a superior fatigue performance. More details about the characterization, cyclic and fatigue behavior of the Fe-SMA material can be found in here.
Through an extensive test program, it was shown that pre-stressed/activated Fe-SMA can substantially enhance the fatigue life of steel members, and in some cases, result in a complete fatigue crack arrest (see here).
There are several ongoing studies are on Fe-SMA strengthening of steel plates and girders as well as bridge connections. See more details here. A flat PUR (FPUR) system was developed and used for flexural and fatigue strengthening of steel girders of the Diamond-Creek Roadway Bridge in Melbourne in Australia, as shown in the picture. A wireless sensor network (WSN) system was used for long-term monitoring of the behavior of both of the bridges after strengthening, as shown in the picture. The WSN system provides the measurement results online for at least one year.
There are several ongoing studies are on CFRP strengthening of steel plates and girders as well as bridge connections. See more details here. An innovative pre-stressed un-bonded retrofit (PUR) system was developed and used for strengthening of different metallic bridges. The advantages of the developed PUR system are:

The system can be easily disassembled/removed from the girders, without any residual effect on the original structure. This makes the system suitable to be used as a temporary or permanent retrofit solution, particularly, for historical bridges (see more info here).
The trapezoidal PUR (TPUR) system was used for fatigue strengthening of riveted girders of Münchenstein Railway Bridge near Basel in Switzerland (see more details here), as shown in the picture.