Empa scientists are saving iron bridges from the 19th century from collapse. Carbon fiber plasters are strengthening the crumbling structures. A railway bridge in Switzerland and a road bridge in Australia have already been reinforced successfully. Many historical bridges could follow. «Partners in crime» are specialists for steel fatigue at EPFL. 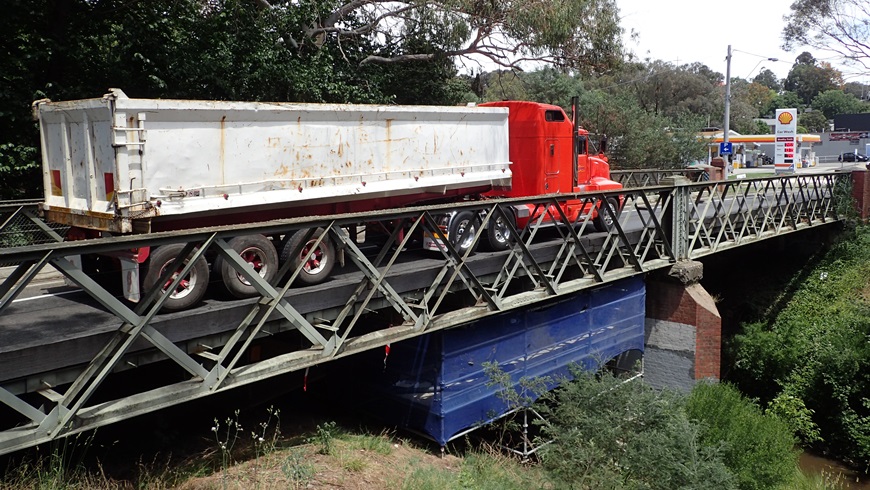 The Diamond Creek Bridge near Melboune was reinforced with CFRP strips in 2018 and tested for durability with a 42-ton truck after work.

Maintaining, not discarding – not only true for art nouveau villas, pre-war sports cars or Hammond organs from the 1950s, ‘maintaining, not scrapping’ is also a good idea for old railway or road bridges. These industrial monuments, often conceived and calculated by steel construction engineers from the 19th century, are rusting away quietly or creaking audibly under the weight of modern Intercity trains and heavy trucks.

The good news is: They can be saved. A supporting brace made of CFRP (carbon fiber-reinforced polymers), reversibly affixed to the bridge and in line with monument protection regulations, strengthens the resistance of the old structures, making them safe and helping them to survive day-to-day wear and tear better and for longer.

Masoud Motavalli and Elyas Ghafoori have already braced two old bridges using this “gentle” method: the Münchenstein railway bridge near Basel, built in 1892, and the Diamond Creek road bridge in Australia, built in 1896. If their system achieves a global breakthrough, there would be plenty of work to do: Roughly 30% of all bridges in Europe are more than 100 years old. The situation is similar in the US, Australia and Japan. Road authorities and railway companies are on a global hunt for methods to keep these structures viable. And it’s possible that Empa holds the key. Empa’s research partner is Alain Nussbaumer. At EPFL, he carries out research into the fatigue and fracture mechanics of steel structures. Nussbaumer also supervises the dissertations under way at Empa as part of these research projects.

CFRP is often the material of choice for reinforcing structures. It is rust-resistant and doesn’t display any material fatigue. It’s also light and doesn’t burden the structure with extra weight in the same way that steel reinforcement would. Under its previous CEO, Urs Meier, Empa gathered lots of experience in the 1990s with CFRP reinforcements of concrete and wood constructions.

An anchor instead of glue

Unlike wood or concrete, however, where the CFRP reinforcement can simply be glued on, it is considerably more complicated to affix it to old steel girders. Often the bridge girders are rusty or covered with thick layers of paint. Sometimes rivets in the steel girders prevent the CFRP plasters from being stuck on smoothly. Ghafoori gets around these problems by affixing the plates to the bridge using anchors rather than sticking the CFRP directly to the bridge. This means there is no need for smooth sanding large surface areas. An additional bonus: The bridge doesn’t need to be closed to traffic while mounting the CFRP strips. Likewise, the bridge doesn’t need to be wrapped in film – something that’s often necessary with old bridges that span rivers to prevent paint splinters containing heavy metals from falling in the water.

The anchors that Ghafoori uses to attach his CFRP plasters are not that easy to recreate. “It’s important that the carbon fibers do not break when attaching the CFRP”, says Ghafoori. He has been experimenting with this technique at Empa for more than ten years and uses the heavy hydraulic presses in the construction hall for his experiments. “It wasn’t easy at first”, the researcher recounts. “When I was testing the first anchors in a tensile test for my Master’s thesis in 2009, they fell off overnight. That didn’t exactly earn me the respect of my colleagues. I was even banned from visiting the lab for a few days, as my work was considered too dangerous.”

In the meantime the anchoring system developed at Empa is protected by patent and has long since overcome its teething problems: Münchenstein Bridge has been reinforced with the pre-stressed CFRP plasters in 2015. Several dozen passenger and goods trains rumble across the historical steel construction every day. A long-term monitoring system comprising a wireless sensor network measures the load and movements of the bridge parts and delivers the data to Empa in real time.

Prepared for all occasions

News about the project, which also provided the topic for Ghafoori’s PhD thesis, spread quickly in expert circles. As a result, a very similar bridge in Australia was reinforced using the CFRP system in January 2018: the 122-year Diamond Creek Bridge near Melbourne. “We’ve learned a lot since Münchenstein”, says Ghafoori. For example, the researchers were able to improve the shape of the anchors and make the entire construction flatter. That’s important, because many bridges have trucks driving underneath them. If the brace were to project too far downwards, high trailers in particular could collide with the new technology.

The team has also incorporated temperature fluctuations between summer and winter in the calculation: The measurements on Münchenstein Bridge had shown that the CFRP reinforcement on the bridge is much more effective on hot summer days than in winter. The reason is that summer heat causes the steel bridge to expand, but the length of the CFRP reinforcement remains virtually the same. This means that the bridge is held together more tightly by its supporting brace in summer than in winter.

Diamond Creek Bridge also has sensors and will provide load data online to Empa for at least a year and a half. To see if the reinforcement has an effect, the researchers sent a 42-ton truck over the bridge before and after attaching the CFRP strips. “The initial data has shown that the forces acting on the bridge are reduced by half”, says Ghafoori. “As a conservative estimate, this could mean that the remaining life of the bridge is doubled.”

Nowadays Ghafoori and Motavalli are getting more and more visits from abroad. The French institute of science and technology for transport, development and networks (IFSTTAR), the French center for mobility (CEREMA) and a Chinese delegation have all announced their intention to come, while a US delegation has already visited Empa. The method can be used anywhere in the world without a great deal of effort. “For Australia, we preassembled the clips with the CFRP strips and tested them here at Empa. Then we simply sent them to the construction site by parcel post”, says Ghafoori. “We just had to fly out there later and assemble everything in situ.”

Of course the researchers want to advance their knowledge even further. Having already reinforced straight steel girders, the aim now is to also reinforce the X-shaped connectors between the girders. The points where welded seams and connecting joints meet are especially prone to rust and this is also where fatigue cracks appear that can make the bridge unstable. A newly developed CFRP strip system could soon solve this problem. This type of support could make many steel bridges from the 19th century future-proof – allowing them to significantly outlive their younger reinforced concrete counterparts. 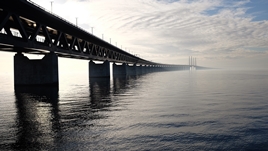