Looking beyond the horizon

Michel Calame is Head of Empa's Transport at Nanoscale Interfaces lab. The name says it all: the physicist aims to conduct research at the interface between physics and biology, where damp systems meet dry electronics and nano-devices display quantum mechanical effects because they are so minuscule. System boundaries are his speciality. 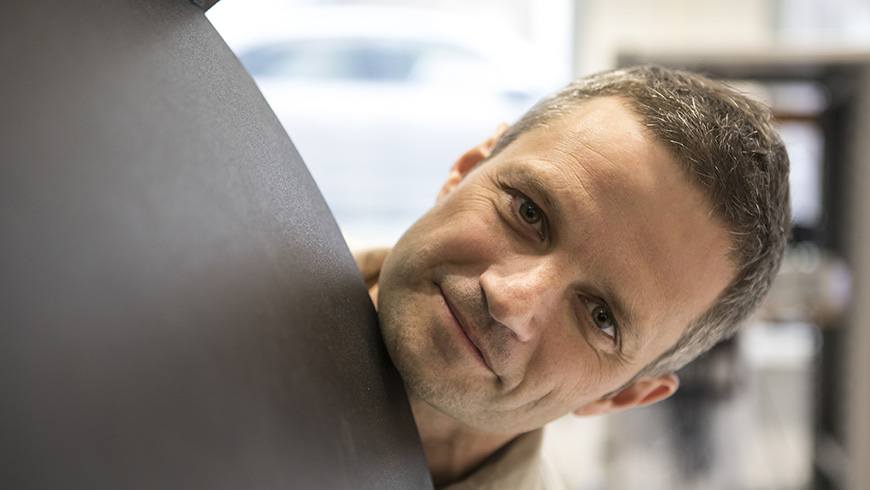 Someone’s on a voyage of discovery here. You can already sense it after a few seconds. Although the term «voyage» doesn’t exactly do Michel Calame’s tempo justice. Perhaps fact-finding mission would be more apt? Either way, it involves venturing into poorly charted territory – a white patch on the research map. Calame doesn’t like conducting his research within familiar systems – in the world of crystals, bio-organisms or regular nanostructures. Instead, he looks for the point where one system ends and meets another; where the laws of one world fade and those of the other start to take effect.

Out of the dry and into the wet

Evidently, he has always been searching. A degree in physics in Neuchatel and a PhD in superconductive thin films, then a brief spell at the Federal Institute of Metrology (METAS), where he was involved in the development of novel cryogenic transistors. He then moved to Rockefeller University in New York, to a research group devoted to molecular biophysics. «Biophysics? Dreadful – it’s wet!» as his classmates said at the time, explains Calame. Even though physicists aren’t particularly fond of getting their hands wet, he found himself captivated by this foray into a world beyond his horizons. «Living organisms are far too interesting to leave them to biologists!»

In research terms, he has been a cross-border commuter ever since. «Interfaces» – the boundaries and meeting points between different materials, but also research disciplines – spark his curiosity. «Observations on a nanometer scale are particularly nice,» says Calame, «that’s where physics meets chemistry and biology. Here, at the nanoscale, the wave nature of electrons becomes clear. Here, I can see quantum effects at room temperature.» His explanation is swift and concise, and you can see his face light up.

Calame has been running the Transport at Nanoscale Interfaces lab with around 40 members since October 2016. An inquisitive boss is one thing – but where exactly is the fact-finding mission taking him and his team? He embarks on a brief detour through physics before outlining his research field: in the 1980s individual atoms, for the first time, became tangible objects; Don Eigler from the IBM Research Center in Almaden (incidentally where Empa CEO Gian-Luca Bona worked for a number of years) arranged 35 xenon atoms on a surface to spell the letters «IBM». «Later, in the 1990s, we were astounded by the successes in nanofabrication – it was like playing Lego in the nanoworld,» says Calame.

Today, however, the interest no longer solely lies in producing small structures, but increasingly the functionalities that can be achieved with them. All sorts of transport phenomena occur and the interpretations drift apart depending on the research discipline: physicists might for instance more often investigate charge transport, while chemists will look into charge transfer. One scientist considers the flow as a whole, the other observes individual charges hopping around. Nonetheless, the boundaries between the disciplines are increasingly blurring from one year to the next. An «intermediate zone» is forming and Calame and his colleagues are enticed by a goal in this very field: engineering with multi-atomic components, such as functional molecules, crystallites or quantum dots.

Molecular switches and a Nobel Prize

Atomic clusters are the tiniest units we can still work on using reasonable technical means. «We can still manipulate a molecule or a nanocrystal to engineer its electronic shell; that’s no longer possible in the same way on an individual atom,» says the Empa researcher. Calame has been working in this field for more than ten years. In 2008 his name appeared on a paper about molecular switches that respond to visible light. The co-author was Ben Feringa, a 2017 Nobel Prize laureate in Chemistry. If individual switches are a wonderful thing – what about an architecture with millions of nanoparticles that organize themselves on a surface under their own steam and still integrate those functional switches? How do you get from there to an interaction with biological systems? And how does this pave the way for the nanoelectronics of tomorrow?

This is where colleagues from related disciplines at Empa come in: in Roman Fasel’s nanotech@surfaces lab, graphene, which is regarded as the electronics building block of the future, is synthesized in the form of nanoribbons; Hans Hug, a microscopy specialist, and his team manipulate electron shells on atoms in the Nanoscale Materials Science lab; Maksym Kovalenko investigates the self-organization of nanoparticles at both Empa and ETH Zurich; at the Biomimetic Membranes and Textiles lab, René Rossi studies the surface properties of human skin and develops functional textiles; and Katharina Maniura from the Biointerfaces lab looks into biofilms on inorganic materials. 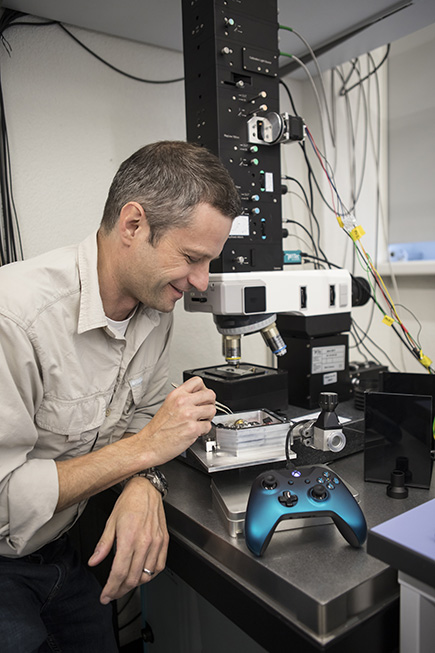 This scientific environment also explains why Michel Calame ended up at Empa after 16 years of teaching and research at the University of Basel. «Empa has everything I need: scanning tunneling and transmission electron microscopes, NMR and UV-Vis spectroscopy, focused ion beams (FIB) for surface patterning and analyses and advanced X-ray analytical methods. And there are also the people here who know how to use them. I need the knowhow available in the materials sciences here to understand my systems better,» says Calame.

And an added bonus about the move to Empa: «The proximity to the mountains and lakes.» Calame grew up in Val de Travers, west of Lake Neuchatel. The scientist enjoys going on hikes to relax. First of all, however, the new family home – a 44-year-old house above Greifensee – needs to be made shipshape for the future. Which, for the time being, means more construction dust than fresh, mountain air.

Calame will remain faithful to his academic home, the University of Basel, for a few more years. He was made an adjunct professor of nanosciences there on 26 October. «Let's put the atoms and molecules to work,» is his motto and he reiterates the purpose of it all: here, at the nanoscale – this is where the building blocks for new switches and new computers can be found,  where the key to new human-machine interfaces lies and where personalized medicine will root. Targeted therapeutic interventions might thus be possible, which may one day make popping large numbers of pills, which inundate the entire body and all its organs and tissues, a thing of the past.

He looks back on the 20th century: the «century of physics». Relativity, quantum mechanics, chaos theory, NASA, space travel, nuclear fission. For him, the 21st century will more likely be shaped by neuroscience and biotechnology. «I was born in 1969 – so I’m a child of the space age,» says Calame. «For the generation of researchers currently coming up through the ranks, however, the scientific race will no longer be about the moon. It might well be about the innermost working of human beings; understanding the brain, understanding life.»