CATCOS logo
From 2011 to 2016, the GAW team at Empa (QA/SAC Switzerland and WCC-Empa) was involved in the CATCOS (Capacity Building and Twinning for Climate Observing Systems) project that was funded by the Swiss Agency for Development and Cooperation (SDC) with MeteoSwiss as the coordinating partner. Since the end of the project, limited support is still provided through Empa's QA/SAC activities. Data of trace gases from the atmospheric CATCOS sites are publically available in the GAW data centres (CO2, CH4, CO, see World Data Centre for Greenhouse Gases, WDCGG); surface O3, see World Data Centre for Reactive Gases, WDCRG). 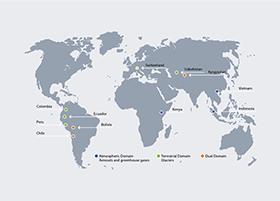 Geographical extent of the project intervention

Within CATCOS, Empa was responsible for the implementation of greenhouse gas observation capabilities in Vietnam, Chile and Kyrgyzstan & associated twinning / support. Other activities covered the implementation of aerosol measurement capabilities in Vietnam, Chile, Kenya and Indonesia (by Paul Scherrer Institut) and the monitoring of glaciers in Kyrgyzstan, Ecuador and Colombia as part of the terrestrial component of the project (implemented by University of Fribourg and University of Zurich). As well, capacity building and training in air pollution monitoring was performed in Bolivia (in collaboration with the Red MoniCA/Aire Limpio project). 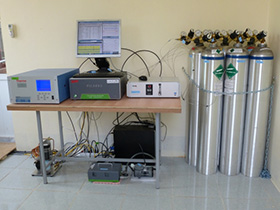 Greenhouse Gas ond ozone measurement equipment at Pha Din
Cavity Ringdown Spectrometers (for CO2, CH4 and CO) and UV absorption analyzers (for O3) along with periphery such as calibration devices, reference gases, pumps, and central data acquisitions were installed at all three sites (El Tololo in Chile in 2013, Pha Din in Vietnam in 2014, and Cholpon Ata in Kyrgyzstan in 2016). 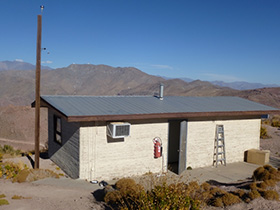 El Tololo station
The El Tololo Regional GAW Station is located at the Cerro Tololo Inter-American Observatory in the foothills of the Andes (30.17degS, 70.80degW, 2040m asl) and is operated by the Dirección Meteorológica de Chile (DMC). Measurements of aerosol optical properties were implemented by the Paul Scherrer Institute. The station is located in a pristine environment without significant influence by local sources. Thus, data at El Tololo are representative for conditions in the background atmosphere in the Southern hemisphere. The installations took place in April 2013. The newly implemented measurements complement the existing observations of surface ozone (since 1995) and meteorological parameters. 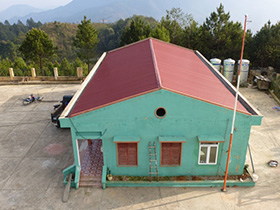 The equipment in Vietnam was implemented in collaboration with the Vietnamese National Hydro-Meteorological Service (NHMS) at the Pha Din climate station (21.57degN, 103.52degE, 1466m asl), a rural site in a hilly forested area in Northern Vietnam. Also at Pha Din the implementation was jointly performed with PSI staff that implemented observations of aerosol optical properties. The Pha Din station is the first of its kind recording greenhouse gases, surface ozone and aerosol properties in a rural setting in Viet Nam. The installations took place in February 2014. No atmospheric composition observations had been running there operationally before. In July 2014, the Cholpon Ata station was accepted by the World Meteorological Organization as a regional Global Atmosphere Watch station. 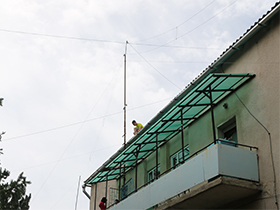 In August 2016, the Empa team installed a further station in Cholpon-Ata, Kyrgyzstan (42.63685°N, 77.0675°E). Cholpon-Ata is located at 1613 meters asl., around 200 km in the East of the Kyrgyz capital Bishkek. In the vicinity, there is a city with 12'000 inhabitants. In the south, the station is surrounded by a large lake (Lake Issyk-Kul, over around 120° azimuth), while mountains with peaks up to 4300 m high restrict the horizon in the north (over around 140° azimuth). Due to diurnal winds, relatively clean air will be measured during the low season in spring and autumn. No atmospheric composition observations had been running there before. In 2021, the Cholpon Ata station was accepted by the World Meteorological Organization as a regional Global Atmosphere Watch station. 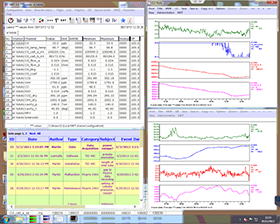 Screenshot of data acquisition and logbook at El Tololo

Remote access to the computers running at the sites enables regular data transfer to Empa and to the headquarters of the local partners and conveniently allows trouble shooting and advice in case of malfunctions. Measured data can be visualized in near-real-time all over the world (see link on the right). 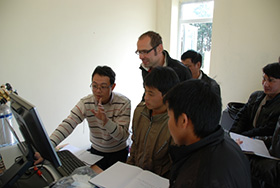 Training of local operators at Pha Din
Next to a careful evaluation of a robust instrumental setup, full remote control of the equipment, easy-to-use programs for documentation and sound quality assurance / quality control procedures adequate training of the operators is key when aiming for the sustainability of the established observations.