Macroscopic crystal structures can absorb unwanted vibrations or filter noise – without any electronics or electricity whatsoever. They can be lighter and more solid than previous conventional insulating material and can even be tailored to their intended purpose. Is acoustics on the brink of a revolution? 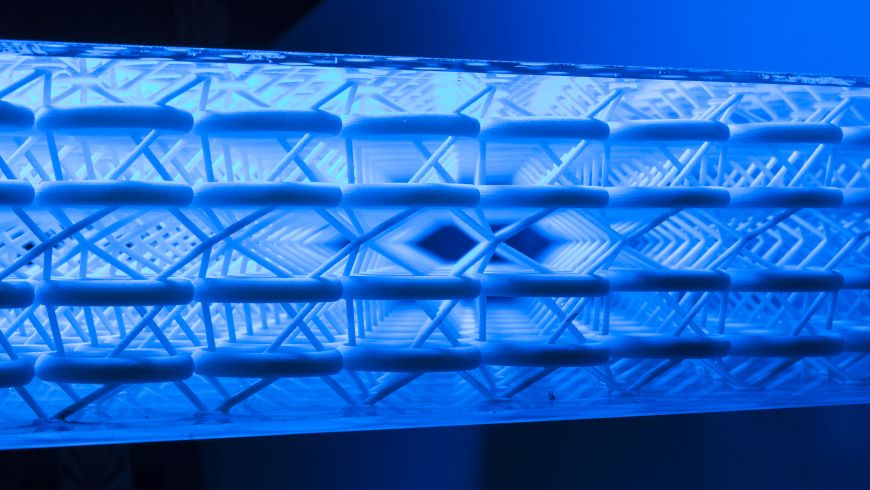 The research project was so risky that industrial companies would unlikely have tackled it – which made it the perfect assignment for Empa: are there any materials that exhibit a high mechanical load-bearing capacity, but are able to absorb sound and vibrations on account of their inner structure? Without any foam rubber, springs or dampers whatsoever? Materials, which solve the old engineering dilemma between stability and damping low-frequency vibrations? Which enable a ship’s engine to be fixed in such a way that the entire hull no longer hums, for instance? Theoretical physicists predicted such materials – so-called phononic crystals. However, only a handful of scientists worldwide already had these peculiar synthetic materials in hand and managed to test their properties on the actual object.

Building on a Caltech idea

Now, after three years of research, a team from Empa finally proved it: these materials do exist. What’s more, they are already patent-pending. In September 2016, the researchers produced test structures made of an aluminum alloy on their own 3D printer for the first time to refine the noise and vibration damping method further. Without modern production methods, such as 3D printing with metals, it would be virtually impossible to make phononic crystals. So in a way, the incredible damping material had to wait for the invention of 3D printing to be discovered.

Inspired by an idea from the California Institute of Technology (Caltech), Empa researchers Tommaso Delpero and Andrea Bergamini embarked on their ambitious project together with Empa acoustics experts Stefan Schoenwald and Armin Zemp in 2013. First of all, they calculated that the ultra-light, three-dimensional metal grid structures with cells on a millimeter scale as developed at Caltech ought to absorb ultrasound frequencies (100 kHz) extremely well. The logical next question: Are there also structures that absorb sound within an audible range or low-frequency vibrations – which would open up a wealth of possible applications? And can these materials be “tuned” to a specific vibration frequency?

Delpero conducted initial tests with the structural model of a diamond. This kind of structure, made out of tetrahedron connectors and small tubes, hangs as a demonstration piece in most chemistry labs in schools and universities. Delpero mounted the model between two sheets of aluminum and excited the lower sheet with diverse frequencies. The result was flabbergasting: The crystal reflected some waves completely. With real diamonds, x-rays are bent and scattered in this way. The diamond model, which was thousands of times larger, had influenced mechanical vibrations with wavelengths that were several times larger in exactly the same way.

A dream for engineers

Bergamini explains just how much potential the invention has: “Until now, as we know from cars, a spring component and a damping component were needed to absorb vibrations.” While high frequencies and sounds can be damped by lightweight materials, deeper sounds and vibrations have required materials with a greater mass thus far. “Now we’ve succeeded in breaking this rule,” says Bergamini. “In future, it will also be possible to damp low frequencies with lightweight materials – namely with a specially calculated phononic crystal. Another advantage: The crystal is rigid and can bear weight – which means it isn’t a soft, springy base.”

This opens up completely new prospects for applications in mechanical engineering. Until now, unwanted frequencies have often been treated with adaptive systems – i.e. sophisticated measuring and control technology. “Such active damping systems are considered the last resort for any problems that can’t be solved otherwise,” says the scientist. “However, engineers would really like to build something uncomplicated that lasts and doesn’t need to be monitored constantly while in operation.” Phononic crystals don’t need any external control mechanisms. They work on their own without any electricity or monitoring electronics – always as anticipated.

The next step: 3D printing 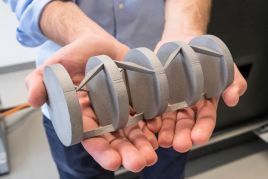 Meanwhile, the project at Empa has moved onto the next phase: Ivo Leibacher, a new member of Bergamini’s team, has prepared his predecessor’s computer models for 3D printing in metal. The structure had to be adjusted in certain details – in some places, for instance, more material was needed to enable the test piece to be produced flawlessly using the so-called powder-bed method on Empa’s own 3D printer. Leibacher pre-calculated his model’s properties and included the key data on the aluminum alloy used into his calculations.

Although the transition from a theoretical model to a practical test is not without its difficulties, the Empa specialists operating the 3D printer are on hand with help and advice. Once it has been printed, the structure still needs to be annealed before it is able to prove the correctness of the calculations and theoretical models in the practical vibration test.

Meanwhile, Andrea Bergamini already has the next experiments in mind. For instance, the vibration-damping units of the phononic crystal might be arranged one after the other in different sizes. Thanks to this built-in gradient, it would be possible to eliminate different undesirable frequencies in one fell swoop.

We can already speculate about possible applications for the phononic crystals. Apart from noise reduction in the car industry and mechanical engineering, earthquake protection is also conceivable. Buildings would have to be constructed on special crystal structures, which are able to absorb the very low-frequency seismic vibrations. Shielding conference rooms against eavesdropping is also on the cards. Therefore, we can afford to be excited about the fields in which we will encounter the Empa invention in years to come.