Caught in the act

As of October 2017, newly launched car models will have to pass more stringent exhaust gas tests in the EU and in Switzerland. The new test method includes measuring drives in actual traf-fic. Empa already tested currently available cars with the new method – with alarming results. 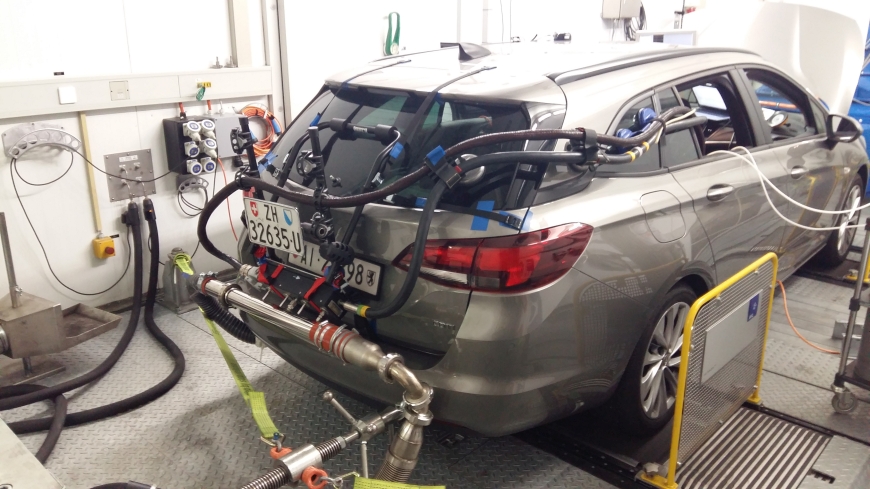 An Opel Astra 1.6 CDTI on Empa’s dynamometer test rig: the tubes connect the exhaust tract to a mobile PEMS device (portable emission measuring system) inside the car. Thus equipped it then heads off around Lake Greifensee.
By now, it’s no secret: the certification requirements for cars in the EU and in Switzerland have precious little to do with the cars’ actual exhaust emissions on the roads. The “real” exhaust emissions are, therefore, determined in separate studies, including at Empa. Air pollution control experts from the Federal Office for the Environment (FOEN) draw upon this kind of data if they want to estimate road traffic emissions. On behalf of the Swiss government, Empa measures about a dozen vehicles a year, which are supplied by randomly selected individuals for a small fee. The data is fed into the European HBEFA database (Handbook Emission Factors for Road Transport) and is used, amongst other things, by international research institutes and authorities as a basis for expert reports.

Last January was a prime example of what can happen during such measurements: the test candidate, a 2016 diesel Renault Mégane, already displayed high nitric oxide emissions at Empa’s test rig. This is because the Empa researchers focused on the vehicle’s actual values – as intended in the new WLTP method – and not the outdated standards of the previous approval procedure. For instance, the vehicle was measured as being almost 300 kilograms heavier than the type test regulations allow for – not out of spite, but because the car drives around the streets at this weight. Later, during the so-called RDE test (Real Driving Emissions), up to 1,300 milligrams of nitric oxides per kilometer were measured in the exhaust. In other words, this current Euro 6 vehicle emits about as much nitric oxides as a ten or 15-year-old diesel car. As of October 2017, however, new models will only be allowed to emit 170 milligrams per kilometer! 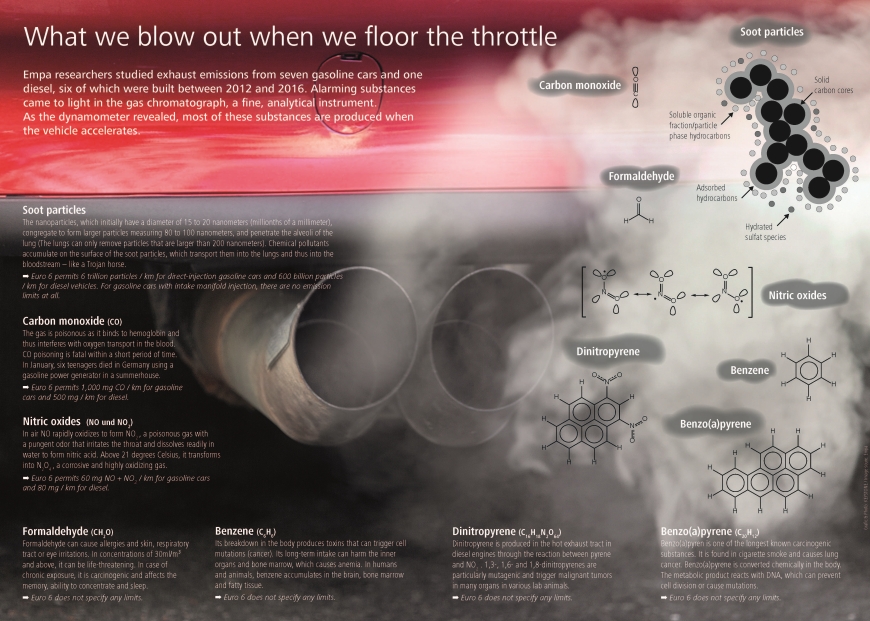 Daily driving is stretching the exhaust gas cleaning in diesel and gasoline cars to its limits. Until now, the law has turned a blind eye precisely here and relied on unrealistic tests on test rigs to set limits and classify cars. But what really comes out the rear end? Empa has been on the case.

A year earlier, the very same model had been crowned “Car of the Year” by European car journalists. How is it possible for a modern diesel vehicle to display such high emissions on the roads? One problem is the previous exhaust gas regulations, which failed to keep up with the rapid developments in powertrain systems. These regulations are fraught with unrealistic dead-weight and driving resistance requirements, and predefined, low-speed gearshift points that have nothing to do with reality. This realization is nothing new: already back in 2010, a decision was made to develop a new, more realistic exhaust gas measuring technique. But why has it taken so long? The topic is complicated and processed by an international working group, which had to make do with many, sometimes even divergent demands.

In the case of the Renault Mégane, the exhaust gas recirculation evidently turned itself off during the test drive – perhaps because the outside temperature was below the minimum temperature in the lab. Other manufacturers also switch off the exhaust gas treatment to go easy on the engine, when it is used outside the test rig – which is perfectly legal according to EU emissions regulation 715/2007/EG.

In Audis and Fiats, for instance, it is turned off after 22 minutes, as the German newspaper Handelsblatt reported (the NEDC dynamometer test lasts 20 minutes); in Mercedes cars below 10 degrees and in Opels even below 17 degrees Celsius, as Handelsblatt also stated (the NEDC dynamometer test requires temperatures above 20 degrees). Opel also switches to another cycle at an air pressure below 915 millibars, as the magazine Der Spiegel reported. The deactivation, therefore, occurs at an altitude of over 850 meters above sea level (the highest testing lab for car certifications in Europe is situated in Madrid, at an altitude of 700 meters).

In February 2017, Opel, Daimler and VW expressed their willingness to voluntarily recall around 500,000 vehicles across Europe to correct their exhaust gas treatment software, which was not illegal so far. On top of this, VW has to correct 2.4 million cars containing an illegal software.

If we also want to use exhaust gas treatment systems continuously at low temperatures and in other adverse conditions, they need to be understood in technical detail, designed correctly and operated under optimal conditions. As the current scandal reveals: there is a still a lot of catching up to do in this respect. Empa makes significant contributions in this sector with a high-temperature flow lab by studying in detail the injection behavior of AdBlue, an aqueous urea solution that is injected into the exhaust gas in new diesel vehicles. Researchers measure the spray cone right down to single droplets using laser measuring devices, study the formation and evaporation of liquid AdBlue films on the walls of the exhaust pipe, and gage the AdBlue breakdown all the way until the formation of the reduction agent for the nitric oxides in the adjacent catalytic converter. These results are channeled back into the refinement of exhaust gas treatment systems.

During Empa’s exhaust gas tests, the experts from the Automotive Powertrain Technologies lab drive along a defined route southeastwards from Dübendorf, around Lake Greifensee, then back on the highway from Uster via Brüttiseller Kreuz (see map). During the journey, the NOx emissions are meticulously recorded by a so-called PEMS (Portable Emission-measuring System).

The Mégane is not alone

Empa has already tested three new lower mid-range diesel vehicles with the current exhaust gas standard Euro 6 using the new RDE procedure. In all of them, NOx emissions during every phase of the trip lay between 600 and 1,400 milligrams per kilometer; exhaust gas tests by other labs reveal a similar picture. In other words, the Renault Mégane is not alone. These vehicles can continue to be sold until the fall 2019; however, upcoming model series must pass the stricter WLTP and RDE tests to be approved.

Anyone who would like to drive a cleaner car than the law requires today does have an alternative, though: with NOx emissions way below 10 milligrams per kilometer, the natural / biogas vehicle that was also included in the measurements fared around 60 to 140 times better than the diesel cars. 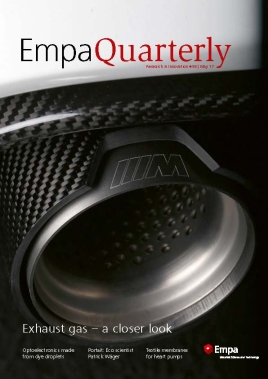