Space age material for the masses

Aerogel is the perfect material for many insulation purposes. It is heat-resistant up to 600 degrees, ultralight, non-toxic – and provides excellent thermal insulation. Only its complicated and expensive production causes quite a headache. An Empa start-up is about to revolutionize the manufacturing process. If successful, there will soon be affordable aerogel for everyone. 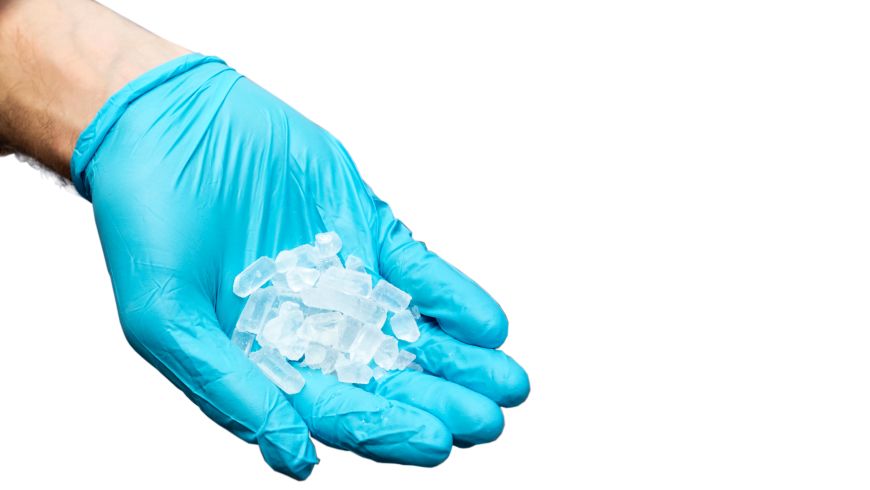 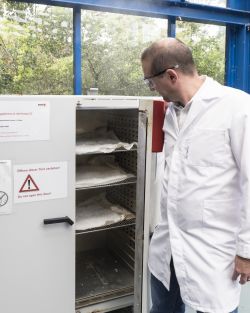 Needless to say, NASA has already had it for a long time: aerogel, a kind of mineral foam that only weighs around 100 kilograms per cubic meter. Rocket makers soaked the light material in fuel to render rocket stages safer, and space researchers used the supermaterial to collect comet dust in space and brought it back to Earth. But owners of old buildings in Switzerland are also reaping the benefits from its tremendous insulation performance: in 2013 the construction company Fixit brought an innovative aerogel insulating render it had co-developed with Empa to the market, which does not compromise historical façades and even insulates them more effectively than polystyrene foam.

However, the material remains scarce and expensive. Two US-based manufacturing companies dominate today’s global markets. Still, the production process is slow to boot up and accelerate. This is because aerogel manufacturing requires complex processing, a healthy dose of patience – and large quantities of chemical solvents. Until now, that is.

Empa researcher Matthias Koebel and his team are well on their way to changing all this. Koebel runs the laboratory for “Building Energy Materials and Components” at Empa, which is devoted to research on aerogels and other porous materials. Together with his colleagues, he has developed a new production method and already patented it. The technique saves a substantial proportion of the chemical solvents used thus far. To date, solvents have had to be painstakingly rinsed out of the moist gel and replaced with others before the time-consuming drying phase is even possible. “We call the alternative we’ve developed the one-pot method,” explains Koebel. “Instead of performing a full solvent exchange, we only need to remove around ten percent of the solvent mixture and add ten percent of a catalyst mixture. After a brief period of warm storage, our gel is ready for drying.” The key advantage: it only takes a total of five hours to produce, compared to twelve in the past. 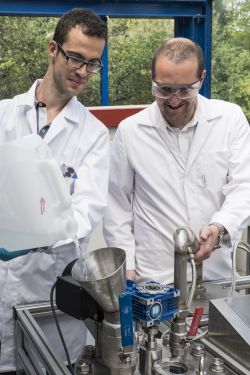 Aerogel has to be hydrophobic in order to be used at construction sites: Matthias Koebel (right) and his assistant Lukas Huber pour catalyst into their pilot plant start this chemical reaction.

Armed with this knowledge, the researchers are now tackling the production process. To mass produce the coveted material, it is not enough to make individual pots or tubs of aerogel one by one. Large quantities and scalable processes require a kind of production line, Henry Ford style. Koebel explains his view of a large scale process: lab tests with small containers, which his team used to produce the aerogel, were successful; the Empa team has the chemistry under control. For mass production, Koebel does not want to use large batch-type reactors but insists that continuous production is the future. More like in a large bakery, the raw materials should be fed in at the front, piled onto carts, and the wet gel comes out the back ready for drying.

“It’s not quite that simple, of course,” says Koebel and laughs. “Otherwise, everyone would be doing it.” During the journey through a manufacturing tunnel, the fresh gel solidifies and “sweats” liquid, which is then removed and replaced with a catalyst mixture or other reagents. Once a hydrophobization catalyst has been added, the gel must remain inside the tunnel for the time it takes the reaction to occur. The gel then becomes hydrophobic and can be dried. By adding polymer-based hardeners or other additives, the firmness or other material properties of the aerogels could also be improved specifically or tailored to the customer’s needs. Depending on the aerogel recipe, the trick is control residence time and reagent addition inside the tunnel as well as the right temperatures for each stage so all the chemical processes involved in making the perfect gel can be controlled. The addition of reagents in this way enables the chemistry and the material properties of the finished product to be customized for various applications and products.

Koebel is now in the process of founding a start-up company in collaboration with several partners from the construction, industrial insulation and automotive industries, who are all interested in reasonably priced aerogels. If all goes as planned, the production of affordable aerogel should be realizable on an industrial scale within three years.