Are new gasoline cars environmentally friendly? Not always, says a new study led by Empa scientists: some direct-injection gasoline engines emit just as many soot particles as unfiltered diesel cars did in the past. And they "carry" numerous carcinogenic substances. Particle filters could remedy this situation. 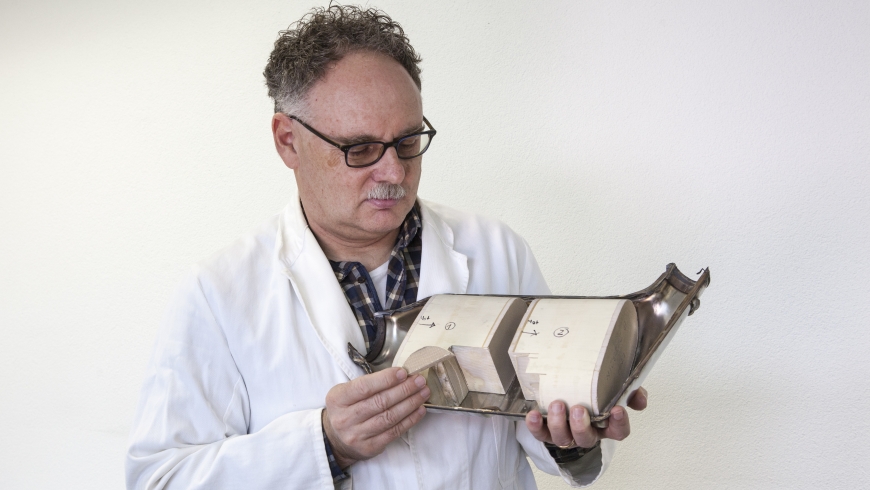 Worldwide, three new cars roll off the line every second – that’s 73 cars and 18 million utility vehicles per year. Most run on gasoline. In industrialized nations, the trend is moving towards so-called downsizing engines: smaller but with direct gasoline injection and turbocharging. This technology is kind to the environment and saves fuel, the manufacturers say. Experts estimate that by 2020, 50 million of these direct-injection gasoline engines will be running on the roads all over Europe – high time the cocktail of exhaust emissions from these engines were examined closely.

In the spring 2014, the GasOMeP project (Gasoline Vehicle Emission Control for Organic, Metallic and Particulate Non-Legislative Pollutants) got underway. The Paul Scherrer Institute (PSI), Bern University of Applied Sciences, the University of Applied Sciences and Arts Northwestern Switzerland, several industrial partners and Empa were all involved. The project was funded by the ETH Domain’s Competence Center for Energy and Mobility (CCEM) and coordinated by Empa chemist Norbert Heeb, who has made a name for himself in the last 25 years by analyzing diesel emissions and studying filter systems.

The team selected seven direct-injection gasoline cars, including a Mitsubishi Carisma (2001 model, exhaust emission standard
Euro 3). The other vehicles were all built between 2010 (VW Golf, Euro 4) and 2016 (Citroën C4, Euro 6b). By way of comparison, a current Peugeot 4008 (2013, Euro 5b) with a diesel engine and a particle filter was also included. All the vehicles were tested based on the WLTP cycle (Worldwide Light-Duty Vehicles Test Pro-cedure), which will be mandatory for newly licensed models as of September 2017. 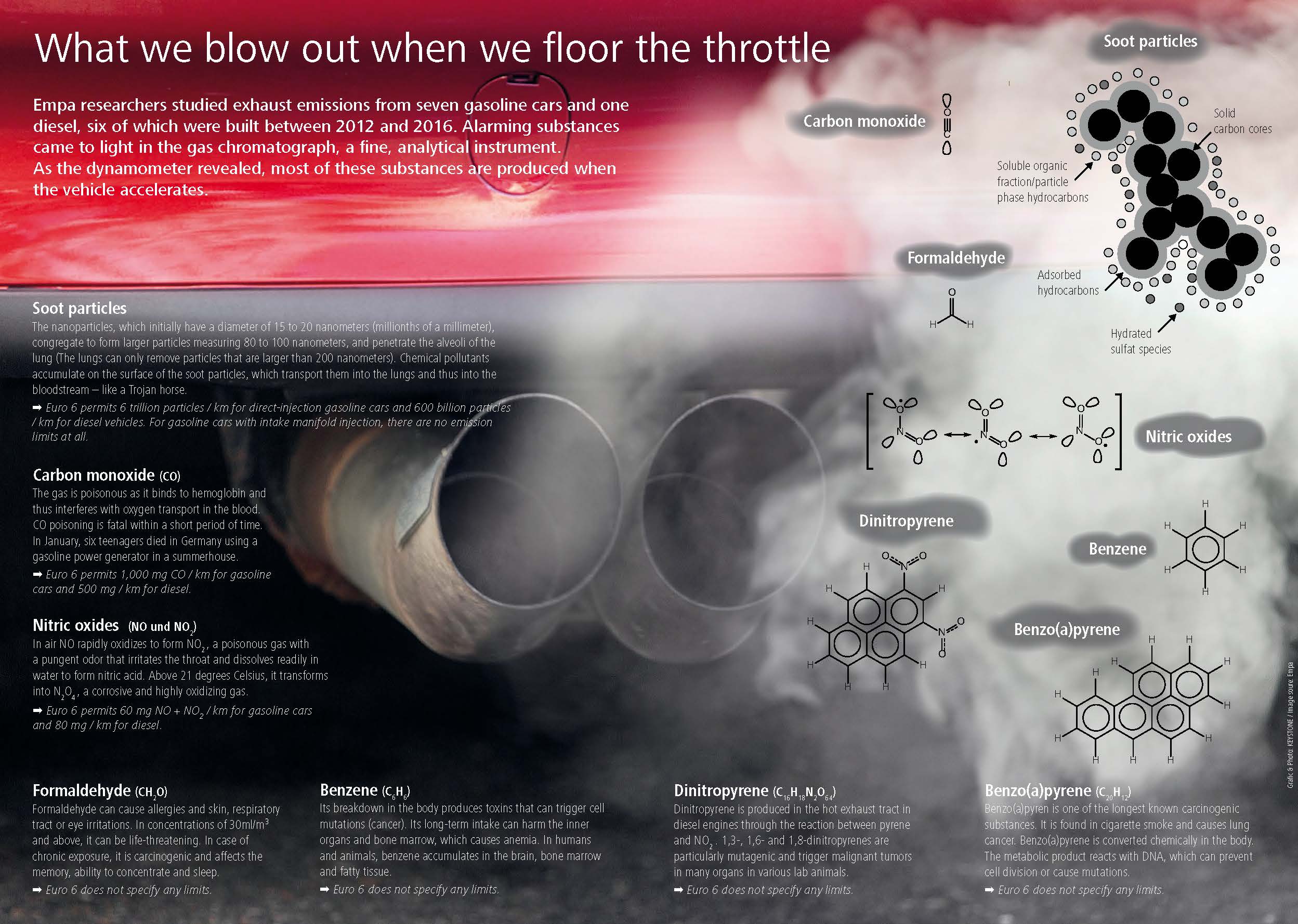 The results were sobering: every single one of the tested gasoline cars emitted ten to 100 times more fine soot particles than the diesel Peugeot. Under the microscope, the particles from the gasoline engines were similar in size to the soot particles that had given diesel a bad name: primary particles measuring ten to 20 nanometers in size, which congregate into particle agglomerates measuring 80 to 100 nanometers before leaving the exhaust. “Once inhaled, these particles remain in the body forever,” explains Norbert Heeb. The evidence shows that they can penetrate the membrane of human alveoli in the lungs and thus get into the bloodstream.

However, the particles are not the only problem, as Heeb is well aware: “Liquid or solid chemical toxins from the combustion process, including polycyclic aromatic compounds, accumulate on the surface of the particles, which can then smuggle these substances into the bloodstream – like a Trojan horse.” Maria Munoz, a colleague of Heeb’s from Empa’s Advanced Analytical Technologies lab, took a closer look at the exhaust emissions from the vehicles tested in the GasOMeP project – and discovered the combustion product benzo(a)pyrene, a known carcinogenic substance also found in cigarette smoke.

The World Health Organization (WHO) considers even the tiniest dose of benzo(a)pyrene harmful. The EU settled on an air limit of one nanogram per cubic meter. Levels in exhaust emissions were found to be as much as 1,700 times above this limit. Or to put it another way, one cubic meter of exhaust gas transforms up to 1,700 cubic meters of clean air into a mixture deemed carcinogenic according to the EU standard.

Once again, the diesel vehicle with particle filter fared much better: in the test, the Peugeot emitted only 45 nanograms of car-cinogenic substances – 6 times less than the best one of the analyzed gasoline cars. 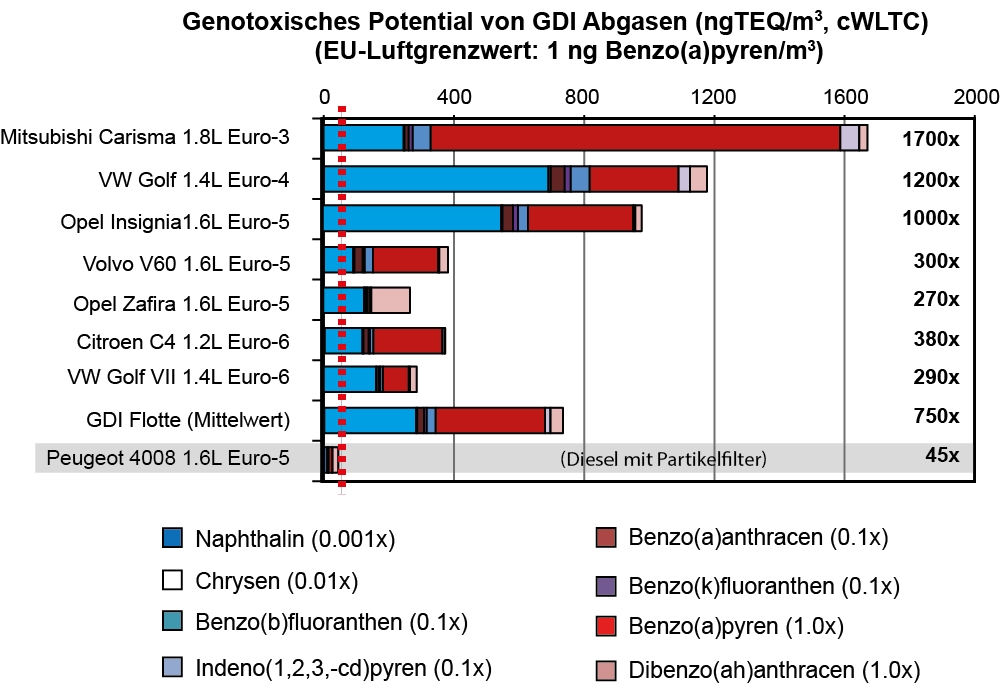 Empa researchers Norbert Heeb and Maria Munoz discovered large quantities of benzo(a)pyrene (red bar) – a combustion product responsible for cutting short the lives of cigarette smokers – in the exhaust gas emitted by gasoline direct injectors. Dibenzo(ah)anthracene (pink) is also carcinogenic. The carcinogenic potential in one cubic meter of exhaust gas from gasoline direct injectors is up to 1,700 times higher than the EU limit for clean air. By contrast, diesel cars with particle filters exceeded the limit only 45-fold.

The results of the GasOMeP project were presented during a conference held at the Empa Academy in late March. The conclusion of the researchers involved: particle filters are established in diesel vehicles and have offered advanced technology for years; based on the current data, they should now also be mandatory for gasoline vehicles.

“At the moment, they don’t incorporate the best available technology,” criticizes Heeb, urging haste: “New exhaust emission technologies launched on the market usually take around 13 years to become fully effective. Only then will nine out of ten cars from the vehicle stock be replaced. So the sooner particle filters are made mandatory for gasoline vehicles, the better it will be for every-one’s health.”

Empa has more than 20 years of experience analyzing soot particles from combustion engines. It all began in 1993 with the decision to build the AlpTransit base tunnel. It soon became clear that the health and safety regulations in the 60-kilometer tunnel building site could not be satisfied with unfiltered diesel construction machinery. At the time, however, nobody was able to prove the impact of diesel particle filters.

As part of the VERT project (http://vert-certification.eu), Empa was involved in the development of a particle filter certification method from 1997, which was met with great interest in the EU. The international workgroup PMP (Particle Measurement Program) was founded at Empa at the end of 2000 with the aim of anchoring a new, more sensitive particle limit in EU legislation. Barely two years later, Empa organized an elaborate measuring campaign, where all the known and available measuring techniques at the time were compared.

The limit for the number of particles that has been in force in Europe since emissions standard Euro 5b (September 2011) is based on the resulting recommendation to use “the number of non-volatile particles” on a nanoscale as a new measurement parameter. Thanks to this threshold, every new diesel vehicle boasts a particle filter today, which slashes particle emissions by anything from one hundred to a thousandfold.