Streaming consumes enormous amounts of energy and is at least as damaging to the climate as all civil aviation – according to a French study. It is generally underestimated what electronic devices – apart from electricity consumption – actually cause in terms of emissions. But how harmful is our digital consumption really for the environment? Lorenz Hilty, head of the Computer Science and Sustainability Research Group at Empa and the University of Zurich, explains.

The world’s population streams more than a billion hours a day on YouTube alone. This causes a lot of CO2. Image: iStock

By 2050, the federal government wants to reduce per capita CO2 emissions to 1.5 tons per year. A challenging goal. Because everything we use consumes energy - even if it’s less visible than when

refuelling our car or air travel, an issue that is strongly represented in the media. The steak that lands on the plate, the heating that keeps our feet warm in winter, or even “bingewatching” on Netflix on a rainy Sunday – everything has its price in the form of CO2 emissions. Streaming in particular is becoming increasingly discredited. According to the think tank “The Shift Project”, our streaming behavior is just as harmful as civil aviation. Should we all get off our screens now?

“That’s definitely not necessary,” says Lorenz Hilty. Although streaming is the most energy-intensive thing you can do on the Internet, the transmission of a video stream usually generates no more emissions than illuminating a room. An hour of streaming on a flat-screen TV produces 150 grams of CO2, including data transfer.

The sum makes the difference 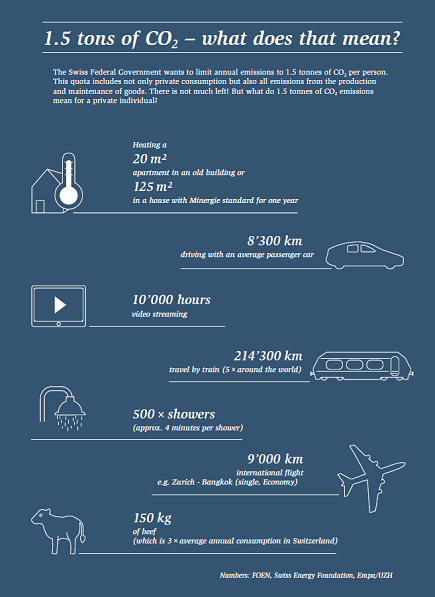 Considering how much is streamed worldwide, however, the energy consump­tion is considerable. On YouTube alone, one billion hours of videos are watched every day. According to a study by the University of Bristol, YouTube’s global CO2 emissions are therefore roughly equivalent to those of the city of Glasgow. However, it should also be noted that the benefits are spread across a large part of the world’s population: “57 percent of all people today have access to the Internet. 34 percent have a smartphone. But only 3 percent of the world’s population can afford to fly at least once a year,” says Hilty.

For Hilty, not only consumers are responsible, but also streaming providers. The fact that YouTube continues to transmit music as a video stream, for example, ensures unnecessary data transfer. Similarly, the trend away from the conventional broadcast principle of television (many viewers watch the same programme simultaneously) to-wards the unicast principle (the data is transmitted individually for each person, i.e. as with Netflix) is responsible for a major leap in the energy consumption of film consumption. And mobile Internet access also costs more energy than stationary Internet access.

Digital is not equal to ecological

Thus digital sometimes does not mean ecological. According to a study by the Royal Institute of Technology in Sweden, a printed book generates 1.2 kilograms of CO2. An eBook reader, on the other hand, requires 30 to 40 times as much to produce. Only when you have read 35 eBooks on the reader does it begin to pay off for the climate. In general, software is still a scientifically hardly investigated area with regard to the emissions caused. Hilty also wants to shed light on this. Together with foreign partners, he has developed criteria on behalf of the German Federal Environment Agency (UBA) to assess the sustainability of software products. “The issue was how much energy the software consumes in the end device, but also the transmission of data and servers,” says Hilty. Further criteria concern the hardware capacities that have to be kept available for the operation of a software product – and how often they have to be replaced and extended because new versions of the software place higher demands on the hardware. In the case of smartphones and laptops, for example, the production of the hardware causes a greater environmental impact than the power consumption during operation of the devices. The Federal Environment Agency is currently working on using the criteria developed in the study to award sustainable software products the “Blue Angel” eco-label.

Sitting in an airplane is still the most CO2 -intensive way to spend time. A single flight from Zurich to New York and back already emits 2.5 tons of CO2 per passenger, significantly more than the targeted per capita emissions budget for an entire year. According to Hilty, it is therefore not appropriate to introduce regulations for streaming on the Internet. “It’s not regulated how long you can keep the light on either.” Nevertheless, it would not do any harm if the population were to develop an awareness of how much energy is consumed and where it can be saved. Because CO2 traps often hide in everyday situations that we hardly notice cause emissions because they happen in distant places. The use of the Internet is one of them.