Short news from Empa acitivities all over the world 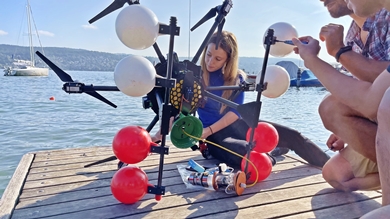 A new dual drone can both fly and land on water to take aquatic samples and monitor water quality, for example. The drone was developed by researchers at Imperial College London and Empa and recently tested together with researchers at the aquatic research institute Eawag for the first time on Lake Zurich.
The researchers developed the drone to make monitoring drones faster and more versatile in aquatic environments. Called the "Multi-Environment Dual Robot for Underwater Sample Acquisition", or MEDUSA in short, its unique design could also facilitate monitoring and maintenance of offshore infrastructure such as subsea pipelines and floating wind turbines. "MEDUSA is unique in its dual robotic design, with a flight component that allows it to access hard-to-reach areas, and a dive component that monitors water quality," explains Mirko Kovac, director of the Aerial Robotics Lab at Imperial College and head of the Robotics Center at Empa. "Our drone greatly simplifies robotic underwater monitoring by performing sophisticated tasks that would otherwise require boats or submarines." 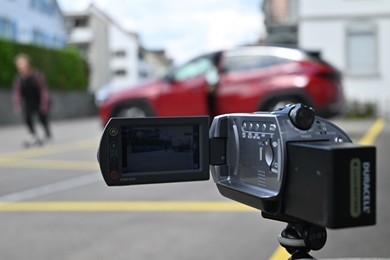 Focus on the interaction between pedestrians and driverless cars: Empa researchers at the pilot study in Thalwil. Image: Empa

Cars that autonomously navigate are expected to be a common sight in just a few years from now.
But how will pedestrians interact with driverless cars? And what would be the best, safest and most sustainable design for a transportation system that accommodates all modes of traffic? A pilot study of EBP, Empa and Pedestrian Mobility Switzerland examines the interactions between pedestrians and vehicles equipped with an automated parking system.
Empa experts are contributing their vehicle technology know-how to this social science pilot study. On two test days in Thalwil behavioral observations and interviews with passers-by were conducted.
You might also like: Empa - Communication - EQ70 Autonomes Fahren 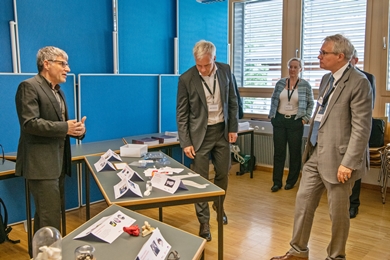 Advanced manufacturing technologies such as 3D printing offer enormous potential for Swiss industry to further expand its innovative strength and competitiveness. Empa is developing such technologies for a wide range of applications - from valves and damping elements to customized hip implants - in close collaboration with its industrial partners, to whom it offers access to its infrastructure, as Jakob Heier (left) explained. Image: Luzia Schär

On the fringes of the World Economic Forum (WEF) in Davos, the institutions of the ETH Domain presented themselves to Swiss politics, research and business. Among the guests were not only Federal Councillor Guy Parmelin, but also several members of the National Council and the Council of States, the State Secretary for Education, Research and Innovation Martina Hirayama, several members of the Graubünden government and the presidents of the two federal universities and the ETH Board, as well as the directors of the research institutes PSI, Empa, Eawag and WSL.
Researchers from the six institutions presented their projects and their innovative research results at six posts. Empa researcher Jakob Heier showed around a dozen products made from a wide variety of materials using advanced manufacturing (AM) technologies such as 3D printing - for example, patient-specific implants, biodegradable mini-batteries made from cellulose and printed sensors on paper and textiles. 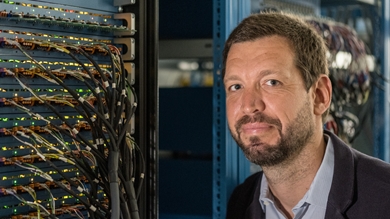 The CircuBAT research project aims to close the loop between production, application and recycling of lithium-ion batteries for mobility. To this end, seven Swiss research institutions and 24 companies are working together to find ways of optimizing the processes. Of the seven subprojects, three are led by Empa researchers. The Battery Cell Production sub-project aims to make the manufacturing process more energy-efficient. By far the most energy-intensive step in the production of a lithium-ion battery cell is the drying of the battery electrode after coating. Dry electrode coating would eliminate this step, resulting in significant energy and cost savings. Corsin Battaglia is leading this subproject.
More 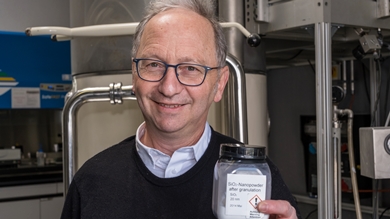 Thomas Graule will assume the presidency of the ECerS from 2023 to 2025. Image: Empa

Thomas Graule, head of Empa's High Performance Ceramics lab, has been elected president of the European Ceramic Society ECerS – the umbrella organization of 28 national associations that provides training for researchers, organizes international conferences and promotes the exchange of scientific publications in the field of ceramics research. ECerS also represents the interests of the European ceramics industry and provides a link between academic research and the application of ceramic materials.
More 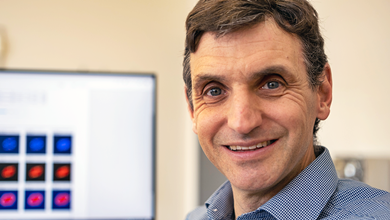 Daniele Passerone is an expert in computer simulations in the field of materials science. Image: Empa

ETH Zurich has appointed Empa researcher Daniele Passerone as titular professor in March 2022. He has been conducting research at Empa since 2006, where he leads the Atomistic Simulations team at the nanotech@surfaces lab. The activities of Passerone's team range from modeling atomic, electronic and scanning tunneling microscopy, to the thermodynamics of growth and the structural or electronic properties of clusters, materials and films, to the study of surface-based nanostructures. Recently, Daniele Passerone's group has also joined the National Center of Competence in Research for the Development of Novel Materials Using Computers (NCCR MARVEL).
More 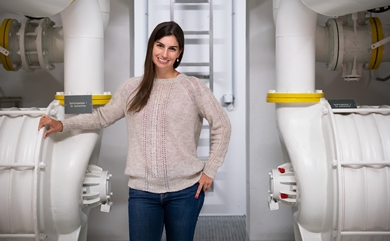 Denise Mitrano, former postdoctoral researcher at the Environmental Risk Assessment and Management Group, led by Bernd Nowack, and now Assistant Professor of Environmental Chemistry of Anthropogenic Materials at ETH Zurich, was awarded the Marie Heim-Vögtlin Prize by the Swiss National Foundation (SNF). She is the 13th winner of the prize which honors outstanding young women researchers and is endowed with 25,000 Swiss francs. Mitrano's research focuses on tracking the spread of micro- and nanoplastic particles throughout the environment.

These tiny particles, formed by the weathering and degradation of plastic items, are by now ubiquitous and one of the defining features of the Anthropocene, the epoch representing significant human impact on the earth's ecosystem and geology. Tracking the spread of tiny plastics allows Mitrano to assess the potential harmful effects that micro- and nanoplastics could have on various ecosystems, develop analytical methods to better identify these particles and interpret the risk for humans and the environment. 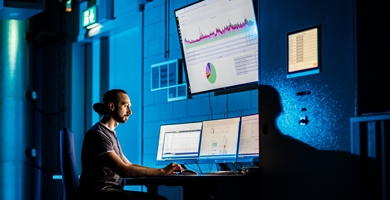 Research platform: Empa's energy hub is available to working groups from all over the world. Image: Empa

Energy storage is one of the major challenges in the current transformation of our energy system. The European Green Deal is intended to help make Europe climate- neutral by 2050. Storage systems play a central role in this. In the recently launched Green Deal project "StoRIES", numerous research institutions and industrial partners throughout Europe are working together on solutions for storing energy. Empa is participating in this project with its research and demonstration infrastructures NEST, move and ehub, as well as its know-how on life cycle analyses in the "Technology and Society" research lab. 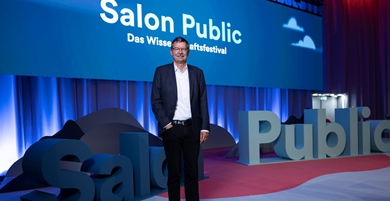 Visionary: Peter Richner talks about the future of living at the "Salon Public" in Bern. Image: Aroma

The "Salon Public" is the largest "science festival" in Switzerland. The four-part science festival took place on October 16 in the Kursaal Bern and on October 23, 2021 in Lausanne. At each event, four renowned speakers present a topic. Peter Richner, deputy director of Empa, showed in Bern how broadly the interpretation of an "intelligent building" can be applied and ventured a view far beyond today's building standards. In addition to Richner, the organizers had invited a number of other illustrious speakers, including former German Foreign Minister Joschka Fischer, solar visionary Bertrand Piccard, ETH Board President Michael Hengartner and philosopher Richard David Precht.