In the district of the future, favors amongst neighbors will go much further than lending a lawnmower or giving some sugar for baking. They will help each other out with energy – with electricity, heat and gas. With the help of the demonstrators NEST and move, the “ehub” – short for Energy Hub – combines energy flows between buildings and mobility within a ‘vertical’ district. The aim of the project is to optimize energy management. 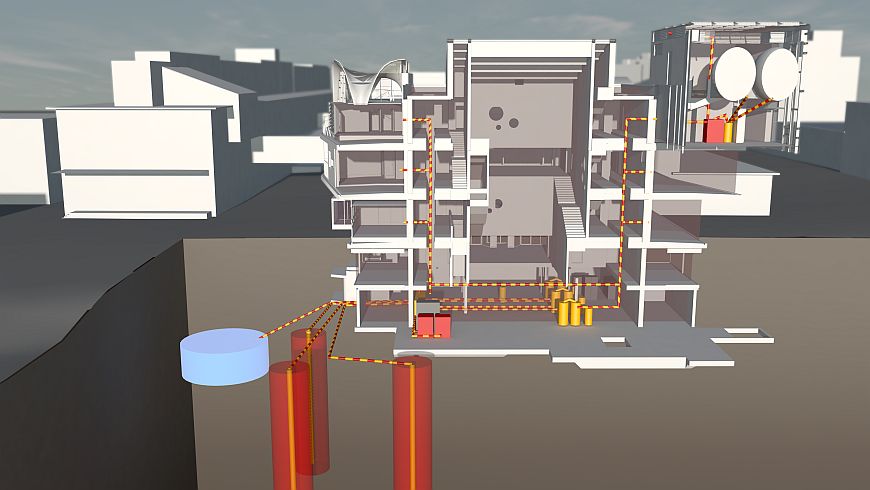 Ready for smart exchange: the system of pipes and wirings distributes energy to the units that need it.
Buildings as energy producers, seasonal storages in the district, bi-directional energy networks: Energy supply is becoming more and more decentralized, and at the same time is raising a range of new issues. What level of local energy autonomy makes sense? What is the importance of new technologies and what combinations make sense? How can the energy demand in mobility be integrated in building-systems? What are the effects on the electrical distribution grid or heating networks? “ehub is an energy research platform that makes it possible to answer these and other questions, test new energy concepts and determine the potential for increased efficiency”, says Urs Elber, Managing Director of Empa’s Research Focus Area "Energy" and Project Manager of ehub.

Many components, one central platform

ehub comprises a large number of components that convert, store and release energy. They are connected with each other via intelligent controls and can be extended to incorporate further technologies. “Depending on the research question, the components can be operated separately or in concert. That’s why there is not just one operating scenario, but lots of different ones, some of which run parallel to each other”, explains Philipp Heer, ehub Technology Manager. As a test environment, ehub uses the two demonstrators NEST and move. “From an energy perspective, the individual units in NEST represent independent residential or office buildings”, according to Philipp Heer. For energy research, NEST is thus a “vertical district” where new energy concepts can be examined for a single component up to a group of buildings.

The units are connected to different electricity, heat and gas networks, which allow energy to flow in both directions. “For example, heat can be transferred from one unit where it is too hot and to a unit where heat is needed”, Heer explains. If more heat is generated in summertime than is needed within the neighborhood, seasonal storage systems are used. ehub has an ice storage and various geothermal probes for this purpose. The stored heat can then be redistributed back into the district, i.e. to NEST, in winter.

Thanks to efficient photovoltaic units, in future more electricity will be produced in summer than is consumed locally. In a building, batteries can store this energy in the short term, but in order to store electricity for longer periods, it can be converted to hydrogen. For this purpose, ehub uses components of the mobility demonstrator move. In this demonstrator Empa collaborates with partners from industry and the public sector to show several ways in which the mobility of the future can be transitioned from fossil fuels to pure renewables. There excess electricity is used to create hydrogen with Electrolysis to store it in special tanks. The hydrogen serves as a fuel for fuel-cell vehicles on the one hand and it can be re-routed back into the building on the other hand, where it is converted back into electricity using fuel-cells.

ehub is open to receiving specific questions from research and industry. “Our results on suitability and the combination of individual technologies in a system should lay the foundations for future investment decisions by planners, architects, energy suppliers and the authorities and give them meaningful and integrated alternatives for action.” That’s how Urs Elber sums up the goals of ehub. To make sure this is a success, it is also necessary to think beyond the district and understand how the changed local networks can impact on the overall energy system, he says.

This is why the next step is for ehub is to be expanded beyond the boundaries of the Empa campus and linked up to the “Energy System Integration” (ESI) platform of the Paul Scherrer Institute (PSI). This broad collaboration raises energy research to a new level and allows research to be conducted on energy networks that are geographically distributed. Moreover, pooling the various skills and technologies enables a holistic view of the energy systems of the future.

ehub is an energy research platform aimed at optimizing energy management at district level. It intelligently combines all the components in NEST that generate, store, convert or release energy. Moreover, it couples the energy flows from the building sector with the mobility demonstrator “move”, which is also located on the Empa campus and where surplus energy from renewable sources is converted into sustainable fuels for the mobility of the future.

move –  mobility of the future

ehub combines two demonstrators on the Empa campus: NEST and move. In both, energy is converted, stored, used and sometimes even generated.

Opened in November 2015, the demonstration and technology transfer platform “move” enables Empa researchers to investigate the production of new fuels based on renewable excess electricity with significantly lower CO2 emissions in a real environment. Renewable electricity serves as the energy source, especially during  periods with low electricity demand  – or is generated in one of NEST’s units.

This renewable electricity can be turned into mobility in different ways: Firstly, it can be stored temporarily in a grid-battery for a few hours and then used to charge electric vehicle batteries. Secondly, it can be converted into hydrogen for fuel cell vehicles by way of electrolysis. Hydrogen is easier to store than battery power.

Ultimately, the aim is to expand the project and produce as a third way synthetic methane from hydrogen and CO2 at “move”, which will enable the renweable electricity to be used in gas vehicles.

Besides the optimization of energy conversion and storage technologies, “move” should also reveal which kind of vehicle drive is best suited to which “mobility application”.