How dangerous are burning electric cars?

What happens if an electric car burns in a road tunnel or an underground car park? In the Hagerbach test tunnel in Switzerland, Empa researchers and tunnel safety expert Lars Derek Mellert set fire to battery cells of electric cars, analyzed the distribution of soot and smoke gases and the chemical residues in the extinguishing water. 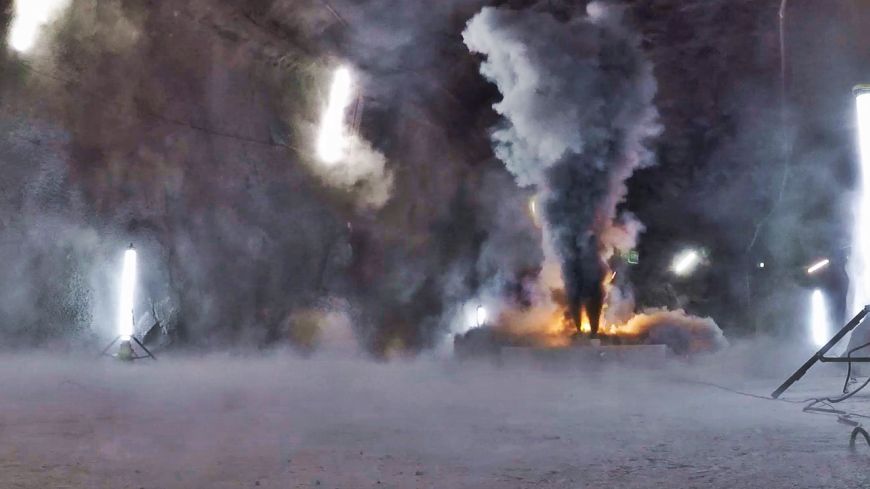 During a fire, a battery module of an electric car develops large amounts of soot, which contains toxic metal oxides. Image: Amstein+ Walthert Progress AG / Empa
There' s a loud bang, and then it starts: A battery module of an electric car is on fire in the Hagerbach test tunnel. A video of the test impressively shows the energy stored in such batteries: Meter-long flames hiss through the room and produce enormous amounts of thick, black soot. The visibility in the previously brightly lit tunnel section quickly approaches zero. After a few minutes, the battery module is completely burnt out. Ash and soot have spread throughout the room.

The trial, which was funded by the Swiss Federal Roads Office (FEDRO) and in which several Empa researchers participated, took place in December 2019. The results have just been published. "In our experiment we were considering in particular private and public operators of small and large underground or multi-story car parks," says project leader Lars Derek Mellert of Amstein + Walthert Progress AG. "All these existing underground structures are being used to an increasing extent by electric cars. And the operators ask themselves: What to do if such a car catches fire? What are the health risks for my employees? What effects does such a fire have on the operation of my plant?" But until now there has been hardly any meaningful technical literature, let alone practical experience for such a case.

With the support of battery researcher Marcel Held and corrosion specialist Martin Tuchschmid from Empa, Mellert developed three test scenarios. Experts from the Hagerbach AG test tunnel and the French Centre d'études des tunnels (CETU) in Bron were also involved. "We installed test surfaces in the fire tunnel on which the soot settled," explains Martin Tuchschmid, corrosion and fire damage specialist at Empa. "After the test, the surfaces were chemically analyzed and also stored in special rooms for several months to detect possible corrosion damage."

Scenario 1: Fire in an enclosed space

The first scenario involves a fire in a closed car park without mechanical ventilation. A parking space of 28 x 28 meters area and 2.5 meters floor height was assumed. Such a floor would have an air volume of 2000 cubic meters. The fire of a small car with a fully charged battery of 32 kWh is assumed. For reasons of test economy everything was scaled down to 1/8. Thus, a fully charged battery module with 4 kWh capacity was set on fire in a room with 250 cubic meters of air volume. The tests investigated how the soot settles on tunnel walls, surfaces and on protective suits worn by firefighters on site, how toxic the residues are and by what means the fire site can be cleaned after the event.

Scenario 2: Fire in a room with sprinkler system

Scenario 2 deals with chemical residues in the extinguishing water. The test set-up was the same as in scenario 1. But this time, the smoke from the battery was channeled with the aid of a metal plate beneath a water shower that resembled a sprinkler system. The sooty water that rained down was collected in a basin. The battery was not extinguished, but burned out completely.

The flammable electrolytes of an electric car battery produce flash fires. Such a fire cannot be extinguished. Instead, burning battery modules must be cooled with large quantities of water to contain the fire.

Scenario 3: Fire in a tunnel with ventilation

In this scenario, the focus of the study lay on the effect of such a fire on a ventilation system. How far is the soot distributed in the exhaust ducts? Do substances that would cause corrosion settle there? In the experiment, a 4 kWh battery module was again set on fire, but this time a fan blew the smoke at a constant speed into a 160-meter-long ventilation tunnel. At a distance of 50, 100 and 150 meters from the site of the fire, the researchers had installed metal sheets in the tunnel where the soot would settle. The chemical composition of the soot and possible corrosion effects were analyzed in the Empa laboratories.

The results of the test were published in a final report in August 2020. Project leader Mellert reassures: In terms of heat development a burning electric car is not more hazardous than a burning car with a conventional drive. "The pollutants emitted by a burning vehicle have always been dangerous and possibly fatal," says the final report. Regardless of the type of drive or energy storage system, the primary objective has to be to get everyone out of the danger zone as quickly as possible. The highly corrosive, toxic hydrofluoric acid has often been discussed as a particular danger in burning batteries. In the three tests in the Hagerbach tunnel, however, the concentrations remained below critical levels.

Conclusion: A tunnel ventilation system that is state-of-the-art can cope not only with burning gasoline/diesel cars, but also with electric cars. Increased corrosion damage to the ventilation system or the tunnel equipment is also unlikely based on the results now available.

Even the fire brigades do not have to learn anything new on the basis of the tests. Firefighters know that the battery of an electric car is impossible to extinguish and that it can only be cooled with large amounts of water. So the fire can possibly be limited to a few battery cells, and part of the battery will not burn out. Of course, such a partially burnt wreck must be stored in a water basin or a special container so that it cannot reignite. But this is already known to the specialists and is being practiced.

The extinguishing water is poisonous

A problem, however, is the extinguishing and cooling water that is produced when fighting such a fire and storing a burnt-out battery in a water basin. The analyses showed that the chemical contamination of the extinguishing water exceeds the Swiss threshold values for industrial wastewater by a factor of 70; the cooling water is even up to 100-times above threshold values. It is important that this highly contaminated water does not enter the sewage system without proper treatment.

After the trials, the tunnel was decontaminated by a professional fire clean-up team. Samples taken subsequently confirmed that the methods and time required were sufficient for the clean-up after an electric car fire. But Mellert warns especially private owners of underground garages: "Do not try to clean up the soot and dirt yourself. The soot contains large amounts of cobalt oxide, nickel oxide and manganese oxide. These heavy metals cause severe allergic reactions on unprotected skin." So clean-up after an electric car fire is definitely a job for professionals in protective suits.
Further information 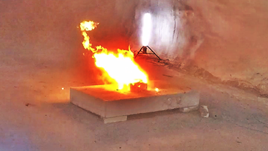 Radio program on Deutschlandfunk, Forschung aktuell, of August 19, 2020, in German.