Modelling of the urban climate

Modelling climate conditions in urban areas is of growing importance for urban heat island mitigation, building design, and city planning. In our research we aim to improve state-of-the-art urban canopy models (UCM), incorporate these in mesoscale numerical weather prediction (NWP) models, an apply the coupled system to study urban climate and the effect of heat mitigation measures in different cities with contrasting environmental conditions such as Zurich or Singapore. 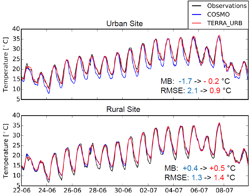 Simulations of the temperatures inside and outside the city of Zurich during a heat wave event in 2015.

We tested COSMO with different urban canopy models (UCM) and at different resolutions. The figure shows the results of a simulation of temperatures inside and outside the city of Zurich, simulated with and without coupling with the UCM TERRA-URB. Inside the city, the TERRA-URB parameterization significantly improves the agreement with observed temperatures, especially at night. Outside of the city the effect of TERRA-URB is small and both versions of COSMO overestimate nighttime temperatures. We also investigated the effect of model resolution on the representation of the urban heat island (UHI) effect in the city of Zurich.

Current UCMs such as BEP or DCEP divide a given grid cell into an urban and a vegetated fraction, with the urban fraction representing a distribution of street canyons with different orientations and geometries, but neglecting vegetation. These models can not account for interactions between street canyons and in-canyon vegetation, which may be significant due to the influence of vegetation on drag, evapotranspiration and radiation/shadowing. Based on recent developements by Krayenhoff et al. (2014, 2015) we are integrating in-canyon vegetation into the multilayer urban canopy model DCEP coupled to COSMO (Schubert et al., 2012) to realistically represent the interactions between trees, buildings and the atmosphere and to study the effects of these interactions in the cities of Zurich and Singapore.