"We are looking for projects in the "valley of death""

Hubert Keiber, Chairman of the Board of Trustees of the Werner Siemens Foundation, describes why the Board decided to award a 15 million Swiss francs grant to a team of Empa researchers. 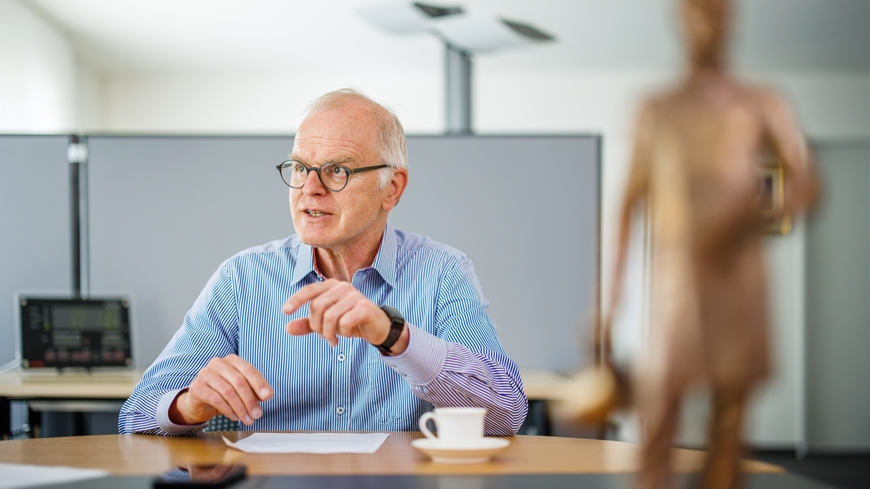 Professional: As a trained physicist and manager of many years', Hubert Keiber assesses the funding applications submitted. Image: Empa

What was your first thought when you heard about the CarboQuant project?

The project came to me via our Scientific Advisory Board, which recommended it to me – or rather to the Foundation Board – as worthy of funding. When I received the application on my desk, I thought to myself – even before I had read it – "Well, graphene, there was a Nobel Prize for it; but what would you want to do that's new, since the topics are largely known and worked on. So what's so special about the project?" Well, the exciting thing about the project is that it's about the geometry of these new graphene materials, that you can "tune" their electrical and magnetic properties via the geometry of the graphene nanoribbons – and that goes far beyond what has been known so far. So it is the shape that determines the function, and not the chemistry – thus a completely new way of thinking. That really impressed me. That's why we invited Roman Fasel, Oliver and Pierangelo Gröning to give us a closer look at the project.

What do you primarily look for when you review a project?

We look first and foremost at the protagonists, at the team, and ask ourselves: Can they really implement the project, do we really trust them? How do they act during the presentation, is it a one-man show, does one person talk the whole time while the others just sit and listen, or do they interact? If they're more like lone wolves, then that's already a problem for us. We're looking for projects that are highly interdisciplinary – and that's rather difficult with a single person. In other words, team play is tremendously important for us. How do they function as a team, is the chemistry right between them? If not, then in extreme cases we would reject even a scientifically excellent project – and we have already done so in the past.

So with the CarboQuant team, the chemistry seems to have been right.

That was a presentation, as we imagine it. It wasn't just a case of one person calling the shots and the others chewing over what the boss said. They really passed the ball to each other. There were three individual minds, and everyone had their own independent opinion – and that's exactly what's needed in such an ambitious project. There has to be discussion and friction in order to make progress. That's what convinced us.

Hubert Keiber holds a doctorate in physics and held management positions at Siemens Switzerland, as well as Siemens subsidiaries in Russia and China, from 1983 to 2015. As Chairman of the Werner Siemens Foundation, he is chairman of the three-member foundation board. 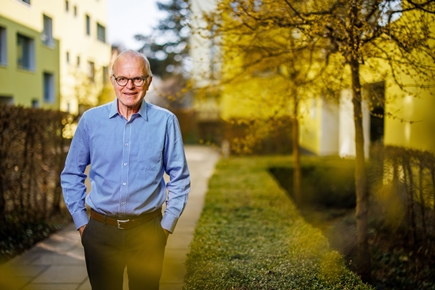 Decision: Together with his colleagues on the board, Hubert Keiber determines the allocation of the grants. Image: Empa

The purpose of the Werner Siemens Foundation is to support outstanding, innovative research projects with the aim of being able to use the resulting innovations on an industrial scale. For instance, you are funding a robot-guided laser scalpel for minimally invasive surgery or antiviral drugs. Where does CarboQuant or quantum physics fit in?

First of all, we have already rejected projects in the field of quantum computers in the past. Today, a lot of purely basic research is still being done in this field – and that is explicitly not our topic. However, we also do not fund projects according to the motto "faster, better, higher" – i.e. when it is "only" a matter of optimizing something that already exists. We are looking for projects that are in the so-called Valley of Death: The basic research has been done – in this case: Graphene exists and is well-known. And now someone has an idea of what could be done with it, such as building a prototype – for which he usually does not yet receive venture capital, but also no more funding for basic research, for example from the Swiss National Science Foundation. Many projects in this "in-between" area never get off the ground because they lack funding. This is exactly where we step in – and CarboQuant fits in perfectly. These very special graphene structures, whose electronic and magnetic properties can be adjusted via their geometry, their shape, could in the future enable computer chips on a completely different basis than is the case with today's quantum computers. However, quantum computers are just ONE possible application for these graphene structures; the quantum computer is the distant goal, so to speak. I am convinced that the findings and developments along the way will also lead to technological innovations in completely different areas.

Which ones, for example?

Microelectronic components and switching elements, for example. The fact that I can set different material properties via the geometry of the graphene was decisive for us – because this completely new approach makes it possible to develop different, i.e. non-silicon-based semiconductors for tomorrow's microelectronics.

15 million Swiss francs is an extraordinarily high amount of money for Empa for a single project – also for the Werner Siemens Foundation?

No, that is exactly the way we fund projects. That's why we fund "only" three to four projects per year, but these are funded with amounts in the range of five to 15 million francs, usually over ten years.

Since you can only spend each franc once, this funding approach involves certain risks. Why do you pursue this particular funding philosophy?

It's because of the way our foundation is organized – we have a very lean staff, and so we only have a limited capacity to review projects. If we were to work on and fund many small projects, we would need a completely different organization. Our philosophy is: small but efficient, if you wish – and by that I mean the project overhead. We don't want to spend money on overhead, the money should go to the research projects.

What "strings" are attached to the funding?

We request a progress report once a year – and then report on it ourselves in our annual report. That's all there is for the researchers to do. Once we decide to fund a project, we also take the risk that it could go wrong. On the one hand, the project may die because the basic idea is not feasible – fortunately, we have not yet experienced this, but it is conceivable, and it can happen. What would somehow be worse, however, is if the team were not able to implement the project – despite good ideas. Because in this case, we, the Board, would have made a mistake. In other words: High risk – high gain.

Quantum computers are regularly in the media – mostly in connection with tech giants like IBM, Microsoft or Google. Why are you supporting a small player like Empa in this "race"?

Because the team wants to think and design quantum computers in a completely new way, also on the material side. Today, you need 4 degrees Kelvin, i.e. temperatures close to absolute zero, to run a quantum computer with, say, 8 Qbits – and CarboQuant could make it possible to run such computers with chips that look like normal chips at much higher temperatures, possibly even at room temperature. And another point: In the area of quantum computing, as you rightly said, Europe is not really at the top of the game. With CarboQuant, Europe could make a contribution to this important field of research.