Twelve years of intense work are now bearing fruit – researchers at Empa have developed unique carbon materials with quite astonishing, hitherto unattained electronic and magnetic properties, which one day could be used to build quantum computers with novel architectures. A million-dollar grant from the Werner Siemens Foundation for the next ten years now gives this visionary project an unusually long research horizon, greatly increasing the prospects for success. 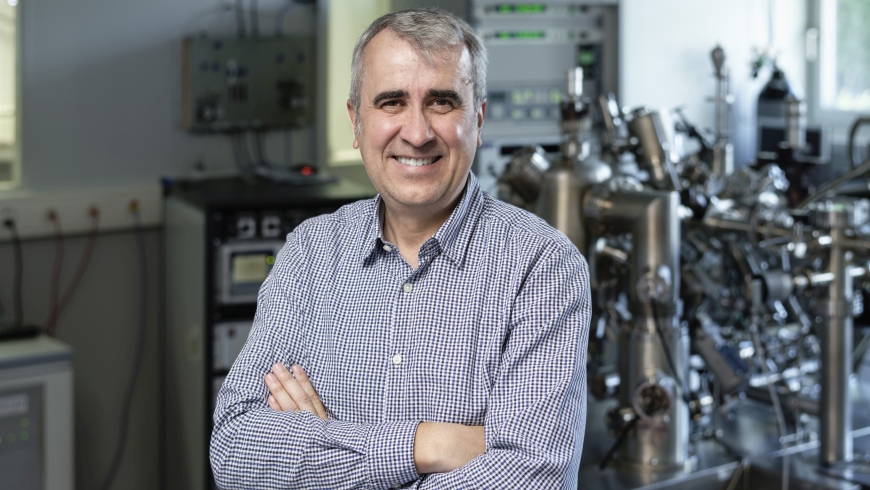 An exceptionally large grant will allow a team of Empa researchers to work on an ambitious project over the next ten years: The Werner Siemens Foundation (WSS) is supporting Empa's CarboQuant project with 15 million Swiss francs. The project aims to lay the foundations for novel quantum technologies that may even operate at room temperature – in contrast to current technologies, most of which require cooling to near absolute zero. "With this project we are taking a big step into the unknown," says Oliver Gröning who coordinates the project. "Thanks to the partnership with the Werner Siemens Foundation, we can now move much further away from the safe shore of existing knowledge than would be possible in our 'normal' day-to-day research. We feel a little like Christopher Columbus and are now looking beyond the horizon for something completely new."

The expedition into the unknown now being undertaken by Empa researchers Pascal Ruffieux, Oliver Gröning and Gabriela Borin-Barin under the lead of Roman Fasel was preceded by twelve years of intensive research activity. The researchers from Empa's nanotech@surfaces laboratory, headed by Fasel, regularly published their work in renowned journals such as Nature, Science and Angewandte Chemie.

In 2010, the team succeeded in synthetizing graphene strips, so-called nanoribbons, from smaller precursor molecules for the first time. With their novel synthesis approach, the Empa team can now produce carbon nanomaterials with atomic precision, thereby precisely defining their quantum properties. Graphene is considered a possible building material for computers of the future; it is made of carbon and resembles the familiar graphite. The material is, however, just one atomic layer thin and promises faster, more powerful computer architectures than the semiconductor materials known today. Back in 2017, the research team, in collaboration with colleagues from the University of California, Berkeley, built the first transistor from graphene nanoribbons and published the result in Nature Communications. 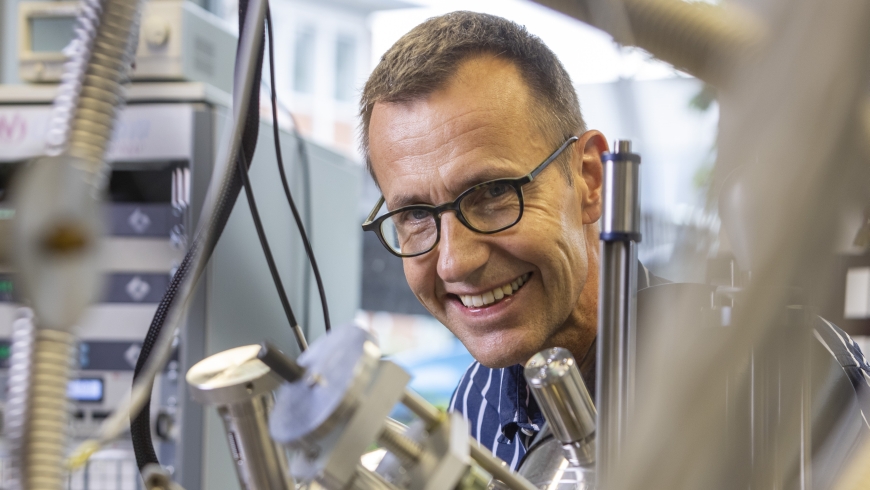 But then the researchers realized an effect that had previously only been predicted theoretically and seemed even more interesting: Their tiny, tailor-made carbon nanomaterials exhibited properties of magnetism. In 2020, they first reported on the effect they had discovered in the journal Nature Nanotechnology – and followed up with a more refined paper in October 2021: Now, using their carbon nanomaterials, they had demonstrated for the first time a physical effect that the future Nobel Prize winner in physics F.D.M. Haldane had predicted nearly 40 years ago: spin fractionalization. This fractionalization only forms when many spins (i.e., fundamental quantum magnets) can be brought into a common, coherent quantum superposition. Empa researchers have achieved just that in their precisely synthesized molecular chains.

CarboQuant is intended to build on these special spin effects in graphene nanoribbons. Gröning says, "So far, we see spin states at very specific locations in the nanoribbons, which we can generate and detect. The next step will be to manipulate these spin states deliberately, for example, to reverse the spin at one end of the nanoribbon and thus elicit a corresponding reaction at the other end." This would give Empa researchers something very unique to work with: a quantum effect that is stable and can be manipulated even at room temperature or requiring just moderate cooling. That could be a silver bullet for building entirely new kinds of quantum computers. 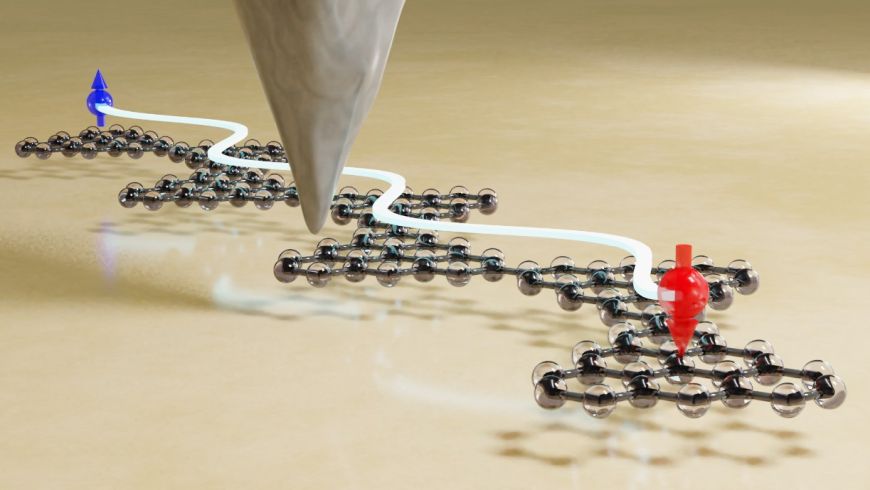 Artistic rendering of a graphene nanoribbon adsorbed on a gold surface and probed with the sharp tip of a scanning tunneling microscope. These tailor made carbon structures exhibit quantum effects that are stable and can be manipulated even at room temperature. That could be a silver bullet for building entirely new kinds of quantum computers. Image: Empa

But why is it that quantum computers can calculate faster than conventional computers? Classical computing machines calculate in bits. Each component can have one of two possible states: 0 or 1. In the quantum world, however, these states can be superimposed: 0 or 1 or both states at the same time are possible. That's why circuits in a quantum computer, known as qubits, can perform not just one computational operation after another, but multiple ones simultaneously. Gröning is already looking forward to the experiment: "If we manage to control the spin states in our nanoribbons, we can use them for quantum electronic devices."

While one part of the team continues to study spin effects in a high vacuum, other team members will focus on the everyday suitability of the graphene nanoribbons. "We have to get the components out of the protected environment of the high vacuum and prepare them in such a way that even in ambient air and at room temperature, they do not disintegrate. Only then can we equip the nanoribbons with contacts – which is the prerequisite for practical applications without the need of an elaborate infrastructure," Gröning says.

The journey into this unknown, new world will in any case be very demanding. Already the initial phase – the entry ticket, if you wish –, the control and time-resolved measurement of spin states, requires a completely new set of equipment that the researchers will have to develop and build. "We need to combine the scanning tunneling microscope (STM), in which we synthesize the nanoribbons and look at their structure, with ultra-fast measurements of their electronic and magnetic properties," Gröning explains. That can be done by high-frequency electrical signals at high magnetic fields and by irradiation with very short, extremely intense laser pulses.

To achieve this, two new measurement systems are being set up at Empa, which will also play key roles in the team's other research projects and which are co-funded by the Swiss National Science Foundation (SNSF) and the European Research Council (ERC). "This shows that synergies always emerge from different projects," says Gröning, "but also that ambitious goals can only be achieved with the support of different players at multiple levels." The researchers estimate that it will take two to three years just to set up these new analytical instruments and to carry out the first test runs. 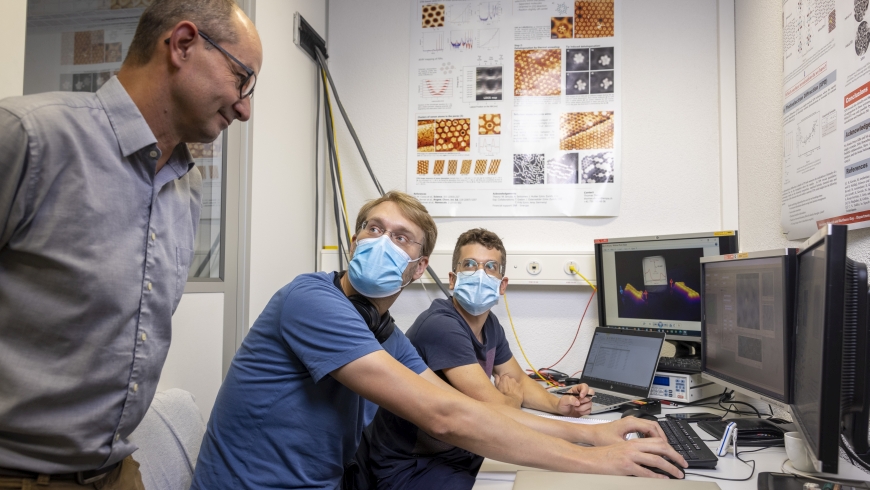 CarboQuant is a very special project thanks to its long-term and generous funding, says Oliver Gröning. The researchers at Empa's nanotech@surfaces lab now have extraordinarily great and long-term creative freedom on the way to their ambitious goal: a possible building material for next-generation quantum computers. "We don't yet see the island that might be out there. But we can guess it, and if there is something out there, we are confident that we will find it, thanks to the support of the Werner Siemens Foundation and our national and international research partners," says Gröning.

The researchers aim at the atomically precise fabrication of low-dimensional carbon nanomaterials such as graphene nanoribbons. Gif: Empa

The Werner Siemens Foundation (WSS) was founded in Schaffhausen in 1923 by Charlotte von Buxhoeveden and Marie von Graevenitz, née Siemens, the daughters of Carl von Siemens, who together with his brother Werner von Siemens had founded the later Siemens Group. The two founders were later joined by other family members as benefactors. The Werner Siemens Foundation, which is located in Switzerland, promotes outstanding innovations and talented young people working in technology and the natural sciences.

Research projects such as CarboQuant promise enormous progress, but are always fraught with the possibility of failure. The Empa Zukunftsfonds aims to support such exceptionally risky and at the same time particularly promising projects by acquiring grants from foundations and donations from private individuals. If you are interested in supporting the Empa Zukunftsfonds, you can find more information at: https://www.empa.ch/web/zukunftsfonds.