Hard times for burglars and safecrackers: Empa researchers have developed an invisible "keypad" made of printed, transparent electronics. Only authorized persons know where to enter the access code. 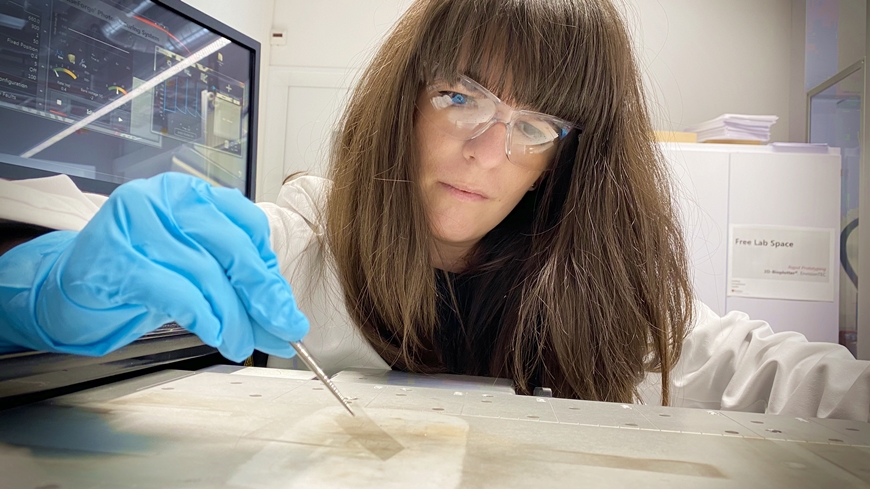 Empa researcher Evgeniia Gilshtein has developed an invisible "keypad": Circuits are placed on a transparent substrate that are barely perceptible to the human eye. Image: Empa

At first glance, Empa researcher Evgeniia Gilshtein's idea seems inconspicuous – or more precisely, invisible. What initially looks like a simple transparent film conceals a whole new level of security. Invisible buttons are printed with conductive ink on the transparent carrier material, the position of which is known only to insiders. Such circuits can be connected to a door lock as an access code, for instance. If the buttons on the polymer film are pressed in the correct order, the door opens. 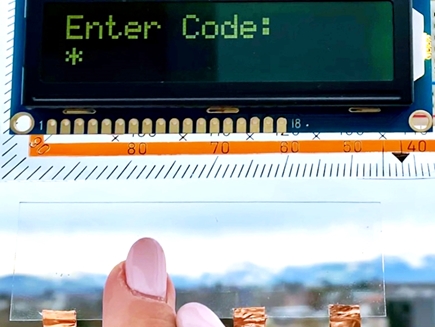 A research team at Empa's "Thin Films and Photovoltaics" lab in Dübendorf, where Evgeniia Gilshtein works, has previously succeeded in printing electronic circuits and sensors on polymer films. Together with researchers from the Paul Scherrer Institute (PSI) and EPFL, they applied thin-film transistors to paper and PET films within the FOXIP research project (short for "Functional OXIdes Printed on Polymers and Paper").

To do this, the team uses transparent conductive metal oxides (TCO). The conductive ink can be applied onto a surface using an inkjet printer, for example. "Of course, we don't use ordinary office printers for this, but the highly specialized equipment at Empa's Coating Competence Center," says Ghilshtein. After all, the precision with which the electronics are printed is in the micrometer range. 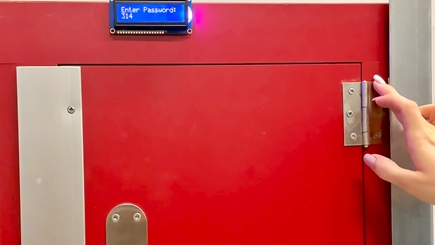 A secretive prototype: Only insiders know that the access code has to be entered on the transparent foil on the door hinge. Image: Empa

Now the transparent security film is being used to advance one of many potential future applications of the technology. "What was most important to us was that the film's additive manufacturing process could also be used on an industrial scale," Gilshtein says. The invisible door lock could be used in banks or hospitals, for example, but also for private homes.

To make the metal oxide-based nanoparticle ink more transparent and conductive than conventional products, the researchers used an elegant detour in the production process: After the circuits were printed and preliminary annealed on the carrier foil, the foil was dyed blue. Since the blue ink, unlike a transparent film, can absorb light, this now enables the ink to be sintered onto the substrate, using high-energy light irradiation. In the process, not only does the blue color disappear, but the opto-electrical properties of the "secret ink" made of indium tin oxide nanoparticles are improved in the same step. "The result is printed circuits that have significantly higher conductivity than previous solutions," says the Empa researcher.

The sensor surfaces cannot be seen by the human eye and can be positioned in suitable locations, such as above a door hinge. Says Gilshtein, "But the circuits can just as easily be positioned on a pane of glass or a curved door handle." The film is also coupled with a display that shows whether the code was entered correctly. Thanks to the comparatively simple printing process, the number of sensors can be increased almost at will.

A competence center for coatings 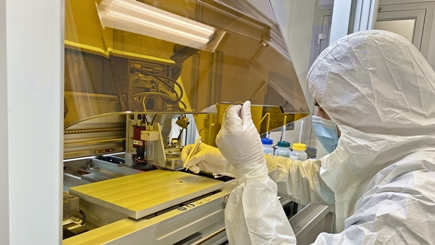 In the clean room of Empa's Coating Competence Center, researcher use highly specialized printing machines to apply the conductive ink to the substrate. Image: Empa

Closing the gap between laboratory research and industrial production for coatings – that is the goal of Empa's Coating Competence Center (CCC). Research is conducted not only on printed electronics, but also on materials, processes and technologies for coatings in general, as well as on additive manufacturing (AM) methods, in which components are built up layer by layer. The CCC is structured as a private-public partnership (PPP). The idea is that all partners along the entire value chain, from academia to industry, work together to develop new technologies and find creative solutions. The center is open for collaborations for partners from industry and research.

Public jury: Your vote is required! 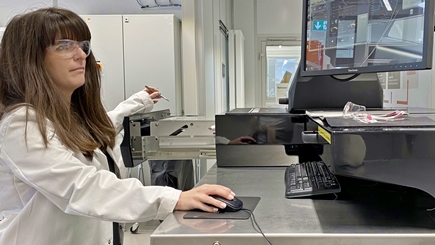 Empa's new technology for printed electronics is currently a finalist in the OE-A-Competition 2021: Empa researcher Evgeniia Gilshtein has already been able to present her transparent safety system to the expert jury at the competition organized by the international industry association Organic and Printed Electronics Association. The annual competition honors innovations, prototypes and designs in the field of flexible, organic and printed electronics. As of 18 March 2021, voting is open to the public. Here you can support the Empa researcher and her project until 25 March with your vote. So please vote!!!