Heating, hot water and private electricity consumption consume large amounts of energy and cause high CO2 emissions. Energy-efficient renovations of buildings can reduce this consumption – but how is the money best used for which type of building? Empa researchers have investigated this question.

Buildings in Switzerland consume around 40% of the final energy. Heat generation accounts for the lion’s share of this. This is not good news for the climate: almost two-thirds of all buildings in Switzerland are heated with oil or gas – making Switzerland the leading country in Europe. Heating alone caused CO2 emissions of around 15.8 million tonnes in 2018. The good news is that there is huge potential to reduce these emissions without sacrificing living comfort – the magic word is energy-efficient renovation.

The differences in how much energy a building consumes are immense: a poorly insulated building can consume up to 300 kWh per square meter per year, while a building built according to the Minergie standard requires no more than a tenth of that. So renovation it is – but what first? A 1990 renovated apartment building from the 1920s? Or do you prefer the single-family house built in 1975 and still in “original condition”? And ideally, which measure should the money be invested in to achieve the greatest effect: renewing the roof? Insulate the walls? Replace the oil heating with a newer model – or even install a new, more efficient heating system? Replace the electrical appliances? Or would solar panels on the roof be the best option?

There are many possibilities, and the means are usually limited. Also from an economic point of view, it does not make much sense to bring a building that already has good values even closer to the optimum at great expense – while an old building could be made massively more efficient for the same amount. Empa researchers from the “Urban Energy Systems” department headed by Kristina Orehounig have taken a close look at Switzerland’s existing buildings in order to find practical answers to these questions. The aim is to identify those measures which, with the optimum use of resources, can avoid as much CO2 emissions as possible. 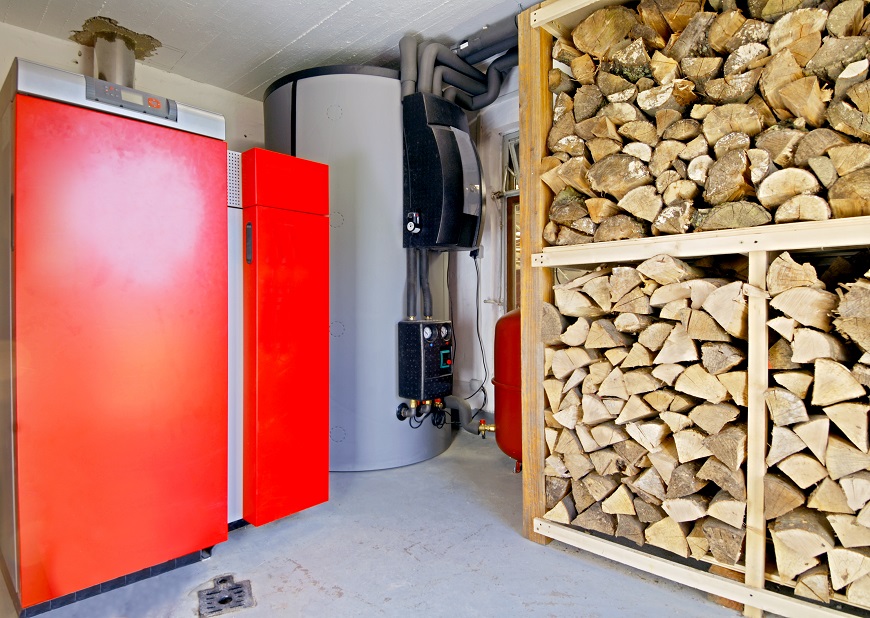 For their calculations, the researchers grouped Switzerland’s buildings into different clusters: by construction period, building type, number of residential or working units and number of floors. They also take into account regional differences – such as solar potential or the need for heating days. This resulted in a set of 1000 archetypal residential buildings – 500 single-family homes and 500 multi-family homes. The data show that the majority of these buildings were built between 1959 and 1994 – and that over 75% use an electric or fossil fuel-fired boiler. For the commercial buildings, a smaller set of archetypes was identified, 45 in all: nine restaurants, schools, hospitals, office buildings and shops each.

The second step was to identify possible measures to avoid greenhouse gas emissions. These include refurbishment of the building envelope, such as additional insulation of roofs, walls and floors, or replacement of windows and doors. Other possibilities are to use more efficient technol-ogies – such as heat pumps – or to use renewable energy, for example by using solar thermal energy, photovoltaics or biomass boilers.

Optimum solutions by year of construction 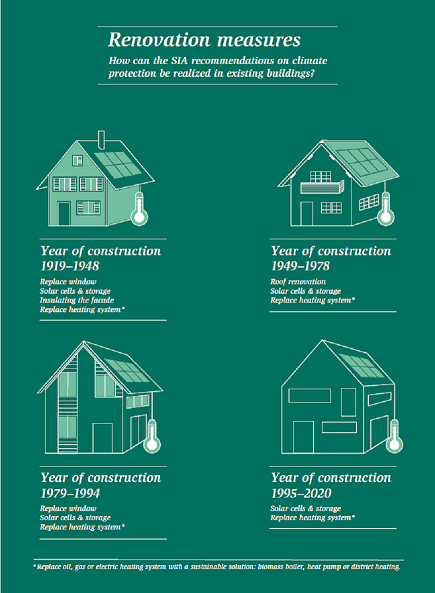 Switzerland has committed itself to reducing its greenhouse gas emissions to a quarter of today’s level by 2050. To achieve this goal, according to the Swiss Association of Engineers and Architects (SIA) Energy Efficiency Trail, emissions from the construction and operation of renovated buildings would have to be reduced to 10 kg CO2 equivalents per square metre per year. Empa researchers used this figure as a basis for calculating how this could be achieved as costeffectively as possible. Calculated across all building types, this figure is CHF 384 per tonne of CO2 avoided. However, there are major differences between the individual building types: the most CO2 per Swiss franc used can be saved by renovating apartment buildings, followed by schools and office buildings.

But which measures are typically necessary for which building category to achieve the targeted CO2 target? One thing quickly becomes clear: houses that run on electric, oil or gas heating have almost no chance of achieving these values, even if the entire building envelope is optimally renovated. District heating, biomass heating or heat pumps, combined with solar panels and storage solutions, are necessary for almost every year of construction in order to reduce CO2 emissions to a low level. Only for buildings constructed after 2010, there are exceptions that achieve sufficiently low values even with gas or oil heating.

Once the energy system has been optimised, the next step is to look at the building envelope. The majority of buildings built since 1995 do not require additional insulation. Even with older construction years, it is by no means always necessary to renovate the entire envelope – even in the case of buildings with the worst values from the years 1919 to 1948, this only affects just under one fifth. In around 60% of buildings from this period, it is sufficient to insulate walls and windows better. For buildings from the following period (up to 1979), the most necessary refurbishment is the roof.

If we go one step further and look at all the residential buildings over all the years, there are six measures with which two thirds of the houses could reach the limit of 10 kg CO2 per square metre and year: Insulate the roof or façade and replace windows, and install photovoltaic systems combined with storage tanks. As far as heating systems are concerned, it is becoming apparent that biomass heating systems or heat pumps are most efficient.

In a next step, the researchers considered not only the individual buildings, but also district heating in their calculations. While fossil-based district heating systems are usually the most cost-effective solution, they are increasingly being replaced by more CO2 -friendly solutions such as waste heat utilisation, heat pumps or biomass boilers. There are significant differences between rural and urban regions. In urban areas, where the distances between buildings are typically short, district heating systems are a cost-effective way to meet CO2 emission targets. On the land, building level solutions are preferable.

Overall, the Empa researchers conclude, the potential is indeed enormous: if the proposed measures were scaled up to the entire Swiss building stock, emissions could be reduced by up to 80%, depending on the type of building. The Swiss building sector can therefore make a significant contribution to improving the country’s sustainability.

The latest issue of Empa Quarterly is now out! 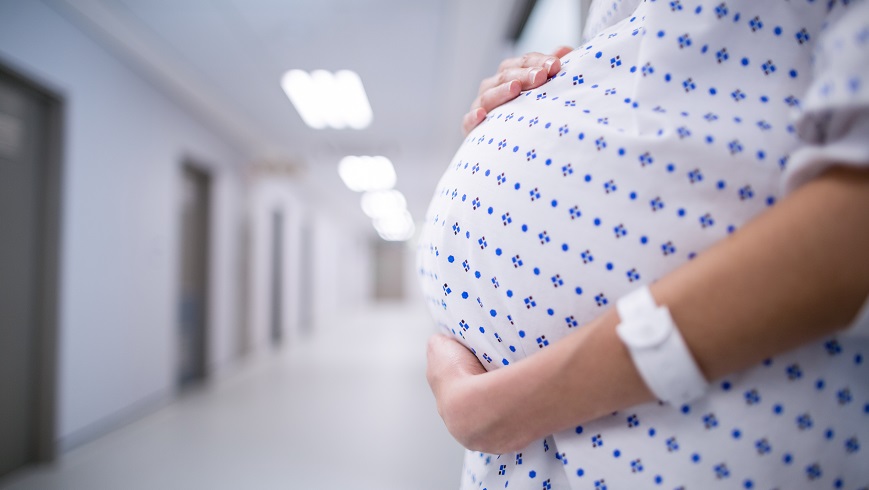