Although terahertz radiation is as harmless as a lukewarm cup of tea, it can penetrate textiles and come into contact with the surface of the skin. Empa researchers aim to use this technique to research, among other things, why babies, sweaty hikers and bedridden senior citizens suffer from chafing. 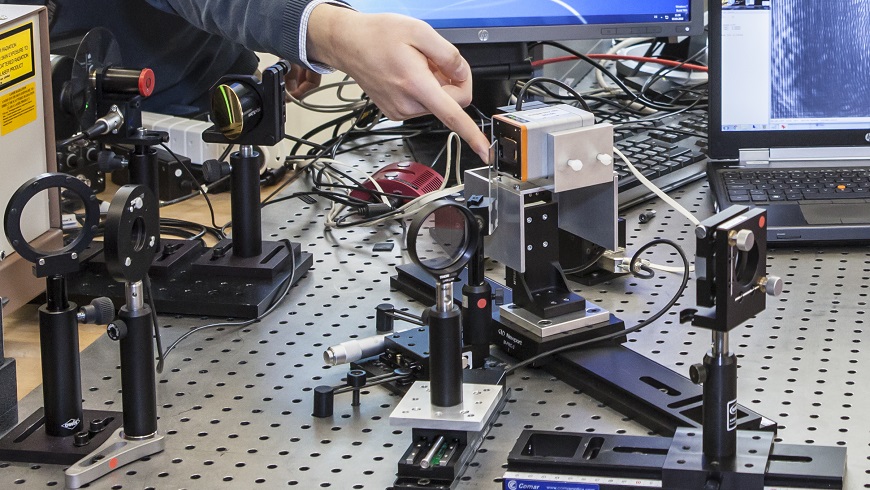 Nowadays, almost the entire range of electromagnetic waves, from X-rays to low-frequency radio waves, is exploited technologically. The entire range? No. A small area between microwaves and thermal infrared radiation defiantly resists technological usage: terahertz radiation. Until now, it has been difficult to produce transmitters and receivers at a reasonable price for this frequency range. And to cap it all, the radiation does not carry very far, either: on a rainy day, it is simply swallowed up by the damp air. Hence, it seems rather useless for wireless data transfer, radio broadcasting, television and the military.

Erwin Hack and Peter Zolliker from Empa’s Reliability Science and Technology lab have taken it upon themselves to use terahertz radiation to learn to see things in a new way, screen materials and gain insights that are unprecedented – or were previously only possible with extremely expensive equipment. “Our primary interest isn’t spectroscopy,” says Hack; “we want images from inside materials and boundary layers that are as precise as possible – and real-time recordings of a change, i.e. ultimately videos.” Only a handful of research groups the world over are active in this field, the two Empa researchers stress. So there is uncharted scientific territory to explore. 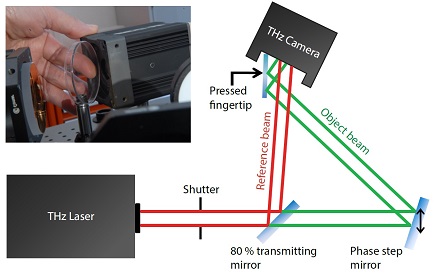 Beam path from the terahertz experiment: a two-part laser beam scans the sample. Touching it is no problem as terahertz radiation is moderate in energy and thus harmless.

The problem of chafing

One of the questions the scientists hope to answer with the aid of terahertz radiation is an everyday problem for many people: sore patches on the skin. Every hiker is all too familiar with them, and anyone who has ever changed a baby will have their fair share of stories. Generations of inventors have tried to find the solution by inventing the disposable diaper and developing countless powders and creams that are supposed to prevent or help heal the soreness. But as surprising as it might sound, the chafing mechanism remains largely unexplored. This is where terahertz radiation could now come in handy as textiles are “transparent” for these wavelengths while they are reflected on wet skin.

Hack and Zolliker now aim to exhaust the potential of terahertz imaging in collaboration with textile partners from Empa to study the interaction between textiles and skin. Lorenzo Valzania is paving the way in his PhD thesis as part of a project co-funded by the Swiss National Science Foundation (SNSF). A lot of spadework is needed. For instance, the optical properties of the material structures need to be fathomed in a series of preliminary tests. How is the beam refracted on synthetic fibers? And on cotton? The fabric itself is also a problem: it isn’t a flat surface, but rather a lattice that bends the beams and distorts the image of the skin’s surface – not unlike how glass bricks in the wall of a house create a very blurry view of the garden for anyone peering out. Only complex post-editing with special algorithms on the computer can transform the blurry image into a meaningful one. And that’s just one of the challenges.

Successful experiment: Empa’s terahertz team has already managed to depict a wax fingerprint. Soon the researchers want to look through a textile layer. Terahertz videos are also on the cards.

The equipment the researchers use to trace the waves fits onto a large lab bench: the largest component is the gas laser, which is placed in a case measuring one and a half meters in length. As it exits, a semi-permeable mirror splits the beam into two. Finally, the laser light hits a sample attached to a glass slide and an infrared camera records the reflected beam at an acute angle.

Empa’s experimental set-up has already yielded unprecedented images: the research team routinely scans many non-conducting substances such as polyethylene, textiles and wood samples, and has already recorded the soaking of these materials in real-time videos.

Moreover, Hack and Zolliker are well on the way towards overcoming a major drawback of terahertz imaging: the poor resolution of the images. As terahertz radiation has a wavelength of between 0.1 and 1 mm, it has been unable to depict any fine structures – at least thus far. However, this is now possible with the aid of holography. Besides intensity, this can also be used to determine the phase information of the terahertz wave, which enables structures to be depicted that are ten times smaller, and also evaluate 3D information on the sample shot. The optics specialists demonstrated the efficacy of this technical trick with a fingerprint. Its structure with a line spacing on 0.5 mm is clearly visible on the terahertz holograph. At the same time, its contour height is measured – an important step towards imaging for chafed patches of skin.
Further information