Spinning a network to promote Power-to-X

On Thursday, 23 June, stakeholders from research, business, administration and politics met at the Zurich Innovation Park in Dübendorf for the first meeting of the newly created SPIN platform to promote Power-to-X technologies. In a joint declaration, they call for the potential of Power-to-X to be fully exploited to achieve climate targets. As a partner in the SPIN network, Empa is contributing its many years of scientific expertise in the area of synthetic energy carriers. 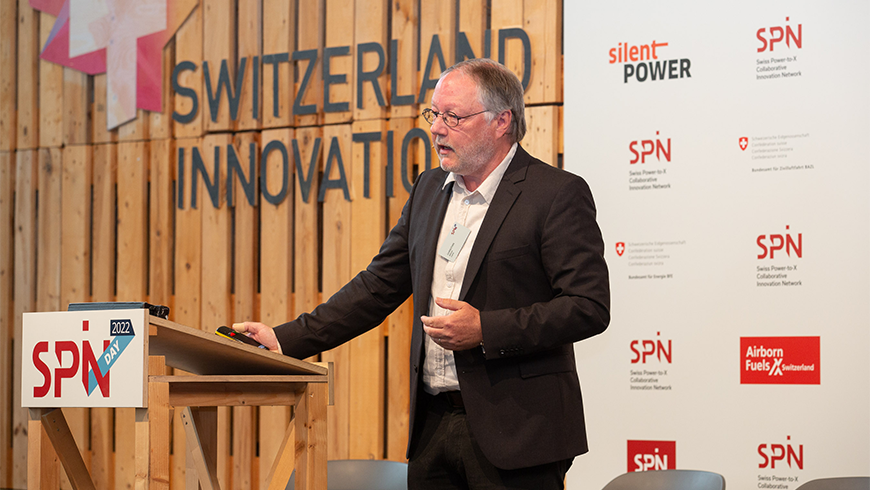 Power-to-X is a term for technologies that convert renewable energy into synthetic energy carriers or raw materials for the chemical industry that can easily be transported and stored for longer periods of time. In either gaseous or liquid form, these synthetic energy carriers can replace fossil fuels in both mobility and industry. They are needed on a large scale to achieve the Federal Council's net-zero targets. A growing number of players – from research institutions to start-ups and politics – have increasingly focused on the potential of Power-to-X technologies in recent years, including Empa in its mobility demonstrator, move.

What is still missing, though, is a national platform that bundles interests, facilitates exchange and discusses framework conditions. With this goal in mind, the Swiss Power-to-X Collaborative Innovation Network (SPIN) was founded in May 2021 and is currently chaired by National Councilor Martin Bäumle. Empa is one of the founding members. "If we want to achieve the energy transition, all players must join forces, and all technological possibilities must be exploited," says Brigitte Buchmann, member of Empa's Directorate. "After all, from a global perspective, we don't really have an energy problem, but rather the challenge of making renewable energy storable and transportable."

Power-to-X for the storage and transport of energy 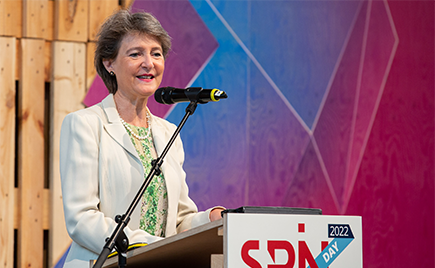 The first SPIN DAY was officially opened by Federal Councillor Simonetta Sommaruga. Photo: SPIN
A first major exchange with around 170 stakeholders from research, business, administration and politics took place on 23 June 2022 at the first SPIN DAY at the Innovation Park in Dübendorf. After welcoming addresses by Federal Councillor Simonetta Sommaruga and Zurich Cantonal Government Councillor Carmen Walker Späh, Empa researcher Christian Bach spoke about the possibilities of Power-to-X for storing and transporting renewable energy. "Trading and transport mechanisms for gaseous and liquid energy carriers are established worldwide from the fossil supply we were using thus far," he said. "This infrastructure can also be used one-to-one for synthetic energy carriers, for example, to transport energy from sunny regions to regions with less energy. Energy can thus be 'harvested' where it is abundant." Bach considers this large-scale shifting of energy – along with seasonal domestic energy storage – as the greatest potential of Power-to-X technologies. He also sees opportunities to use the technology to even generate negative CO2 emissions. One approach is to extract carbon from the atmosphere in the form of CO2 for the production of synthetic energy sources and to split it off at the end of the chemical conversion processes in the form of solid carbon. The solid carbon is thus no longer released into the atmosphere as CO2, but can be used in building materials, for example, thus reducing the overall CO2 concentration in the atmosphere.

In addition to presentations and workshops, the SPIN DAY also offered plenty of opportunities for exchange between the various players. As a first concrete result, the participants jointly agreed on the Power-to-X Declaration of Dübendorf, an appeal to politics, administration, science, industry and the public to promote and establish Power-to-X technologies.
Further information
Björn Niesen
Managing Director, Research Focus Area Energy
Phone +41 58 765 42 62