In the FOXIP project, researchers form Empa, EPFL and the Paul Scherrer Institute attempted to print thin-film transistors with metal oxides onto heat-sensitive materials such as paper or PET. The goal was ultimately not achieved, but those involved consider the project a success – because of a new printing ink an a transistor with "memory effect". 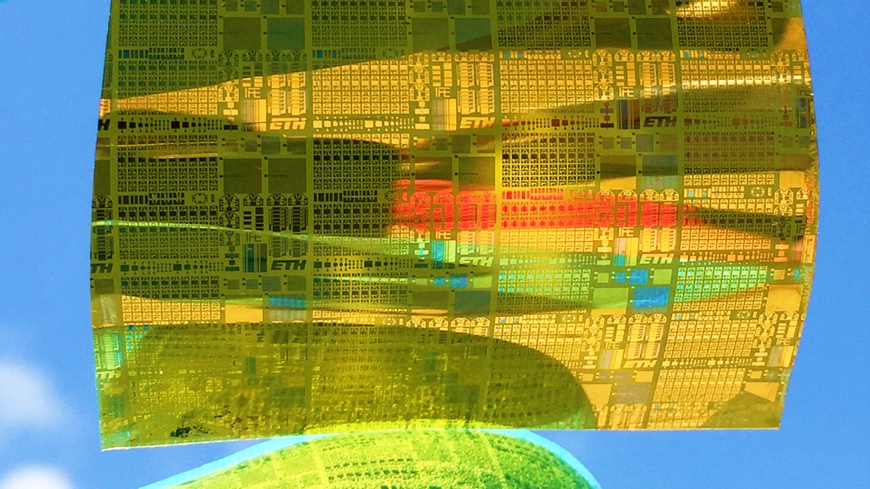 The bar was undoubtedly set high: In the research project Functional Oxides Printed on Polymers and Paper – FOXIP for short – the goal was to succeed in printing thin-film transistors on paper substrates or PET films. Electronic circuits with such elements play an important role in the growing Internet of Things (IoT), for example as sensors on documents, bottles, packaging ... – a global market worth billions.

If it were feasible to manufacture such transistors with inorganic metal oxides, this would open up a plethora of new possibilities. Compared with organic materials such as the semiconducting polymer polythiophene, explains project leader Yaroslav Romanyuk from Empa's Laboratory for Thin Films and Photovoltaics, the electrons in these materials are much more mobile. They could therefore significantly increase the performance of such elements and would not need to be protected against air and moisture with expensive encapsulation.

Heat as a challenge

The problem with inks containing metal oxides: To form a stable transistor, the materials must be sintered after printing – typically in an oven. Alternatively, drying and sintering can be done with light – for example, with low-wave ultraviolet radiation or a xenon lamp: The printed layer is heated with very short flashes of light to protect the substrate. Water, solvents and binders leave the material in the process.

Nevertheless, such processes heat up the substrate to up to 200 degrees – far too hot for paper or PET, which already begins to lose its strength at temperatures around 80 degrees, while other plastics such as polyimides withstand much higher temperatures.

From 2017 to 2021, in a project of the "Strategic Focus Area - Advanced Manufacturing" (SFA-AM) initiated by the ETH Board, experts from Empa, EPFL's Soft Transducers Laboratory and the Polymer Nanotechnology Group at the Paul Scherrer Institute (PSI) worked together on every step of the process: for example, coatings to smooth the surface of paper, ink formulations, irradiation ... – and made quite a bit of progress.

But their "ultimate wish," as Romanyuk says, to print functional thin-film transistors on paper, did not come true: Process temperatures were still too high, the material too rough. And the printed transistors on polymer films ultimately had too low an electrical output.

Disappointed? No, says Jakob Heier from Empa's Functional Polymers lab: "The project was by no means a failure." Not only because of new insights into technical details, but because of unexpected "side results": "This was a highly exciting project with many surprises", says Heier, recalling an incident that was to have consequences – involving the material graphene: conductive carbon in atom-thin layers that is also well suited for printed transistors on flexible films.

One doctoral student on the team would not be satisfied that graphene inks could not be printed at higher concentrations. The particles aggregate, they clump together – and a thin film can't form that way. Instead of using just one solvent, the employee tried a special emulsion of graphene and three solvents. But this coating also failed in the first attempt. When the ink was mixed evenly in the next attempt and then subjected to light shear forces, however, the printing succeeded.

What was the reason?

Curious, the experts investigated the phenomenon and found that the shear forces fundamentally change the structure of the ink. The fine graphene flakes in the liquid reform, so that van der Waals forces now take effect: relatively weak attractive forces between atoms or molecules. The result was a gel-like ink – without binders such as polymers, which otherwise ensure that the liquid retains its consistency and does not segregate.

A process with market potential

A solution with practical benefits that also works at room temperature; the ink dries without heating. As it turned out, such van der Waals inks can be produced not only with graphene, but also with other two-dimensional substances for printing. In the meantime, the process has been patented, and some companies, according to the experts, are already showing interest in producing the coveted inks – all this after a coincidence that the team had followed up with healthy curiosity.

Not the only surprise in the FOXIP project, as Yaroslav Romanyuk recounts. A field-effect transistor with an insulating layer of aluminum oxide, printed on a heat-resistant polyimide plastic, revealed a rather peculiar behavior. Instead of a constant signal, as would have been expected, it showed rising waves: The output signal became stronger because it "remembered" previous incoming signals. "To show such a "memory" effect is actually undesirable for a transistor," Romanyuk explains.

But another student on the team had an idea to use the phenomenon in a different way. A transistor with such a memory effect works similarly to circuits in the human brain. Synapses between nerve cells not only transmit signals, but also store them. For computers that mimic the human brain, such a synaptic transistor could therefore be highly interesting. But what could it do?

With the support of Mozart

To explore its potential, the team built an electronic copy of the human hearing process along with the thin-film transistor – and fed it a popular Mozart tune: Rondo "Alla Turca" from Sonata No. 11 in A major. "It had to be a lively piece," Romanyuk says with a smile. This experiment and further analysis showed that the transistor's synaptic function is preserved from a few hertz to nearly 50,000 hertz – a much higher bandwidth than comparable printed transistors.

Of course, concrete applications are not yet in sight for this fundamental research, which the team published in the online journal Scientific Reports – in contrast to printing inks without binders. But on the way to new computer technologies, the insights may be a useful step that came as a surprise – as it often has in the history of science.

Such coincidences are the icing on the cake, if you wish, for Romanyuk and many other researchers – especially in projects on the frontier of what is feasible. "We deliberately set our goals very high," he says. "Coincidences play a very big role in this! You set yourself a big challenge and then, suddenly and unexpectedly, these coincidences just happen."

A competence center for coatings 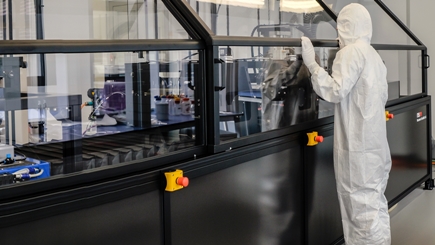 Closing the gap between laboratory research and industrial production for coatings: That is the goal of Empa's Coating Competence Center (CCC for short). Research is conducted not only on printed electronics, but also on materials, processes and technologies for coatings: methods with which thin layers are vapor-deposited onto substrates, or additive manufacturing, in which components are built up layer by layer. The CCC is structured as a private-public partnership. The idea is that all partners along the value chain, from science to industry, work together to develop new technologies and ﬁnd innovative solutions.