How can we best achieve the energy transition?

The World Climate Conference in Glasgow has just ended, and the question is whether the goal of maximum global heating of 1.5°C can still be achieved. In a model calculation, Empa researchers show how the energy transition could lead to the lowest possible cumulative emissions: Instead of slowly cutting back emissions, we should quickly push ahead with the conversion to solar energy and use fossil power plants at full capacity for one last time to do so. 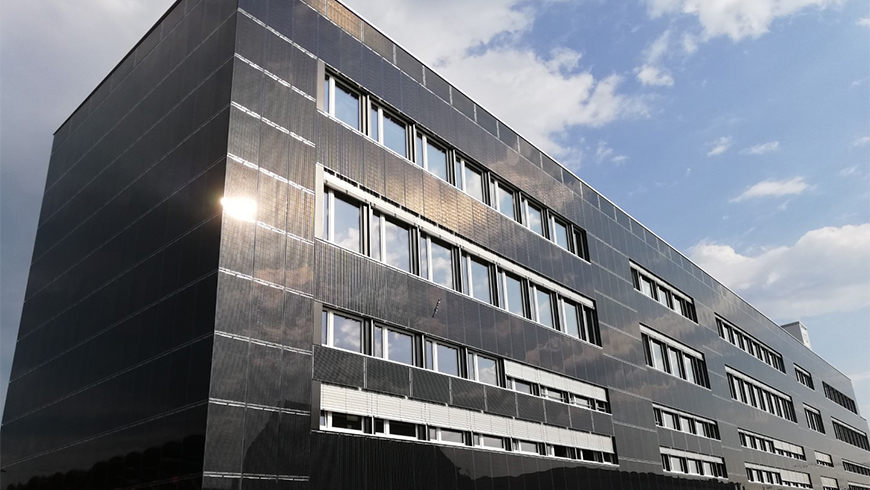 Empa researchers have calculated that the solar potential on roofs, facades, parking lots and other infrastructure, in other words on already sealed surfaces, is sufficient for the energy turnaround. This solar facade on the K3 Handwerkcity building in Wallisellen, has been in operation since 2020. Image: die werke versorgung wallisellen ag

"Who would board an airplane, if the chance to arrive safely would only be 50 percent?" ask Harald Desing and Rolf Widmer at the very beginning of their publication. On our journey into the future with spaceship Earth, we don't have the choice of getting on or off. It is therefore all the more astonishing that even with optimistic transition pathways of the IPCC ("Intergovernmental Panel for Climate Change"), the chances of limiting global warming to 1.5°C are only around 50 percent.

So, we need to do more to increase the chances to arrive in a safe future, the two Empa researchers reasoned. And started doing the math to find the physical limit to accelerating the energy transition. Using a model developed specifically for this purpose in Empa's "Technology and Society" research lab, they simplified the global economy into a radical, clear picture: there is a "fossil engine" that combines all of today's non-renewable energy systems and converts fossil fuels into electricity. And there is a "solar machine" that generates electricity from sunlight.

Since the solar potential on the already sealed roofs, facades, parking lots and other infrastructure is sufficient for the turnaround, there is no need for neither greenfield solar farms nor huge wind farms. Clearly, we need to shut down the fossil machine as soon as possible and build and operate the other, solar machine. The construction of the solar machine first and foremost needs energy, which at the beginning of the energy transition can only come from the fossil machine. How can we do that with the lowest possible cumulative emissions? Because the temperature of the atmosphere depends not on current emissions, but on cumulative emissions - including past emissions.

The two researchers calculated several scenarios and came to a clear conclusion: We would now have to utilize all fossil-fuel power plants to their maximum capacity and put the additional energy thus gained into building up the solar machine. "Our simulation shows that the fastest possible conversion of the energy sector generates the lowest cumulative CO2 emissions," says Desing. Paradoxically, this means that fossil emissions increase by up to 40% during the transition, but with the sole purpose of building solar infrastructure. Thus, the energy transition could be completed within five years, resulting in the lowest cumulative emissions. After that, the fossil engine can then be shut down.

But even the fastest possible energy transition still has a 20 percent chance of exceeding the 1.5°C target. We can't go any lower than that, it's already too late. And every year that we wait increases this probability further.

Conclusion: Theoretically, it would still be possible to reduce the probability of exceeding the climate target of 1.5°C to below 50% - but only if we now speed up the energy transition. The research work was funded by the Swiss National Science Foundation (SNSF).