A new efficiency record of 21.4% for flexible CIGS solar cell on polymer film has been achieved by scientists at Empa. Solar cells of this type are especially suited for applications on roofs, transport vehicles or mobile devices. 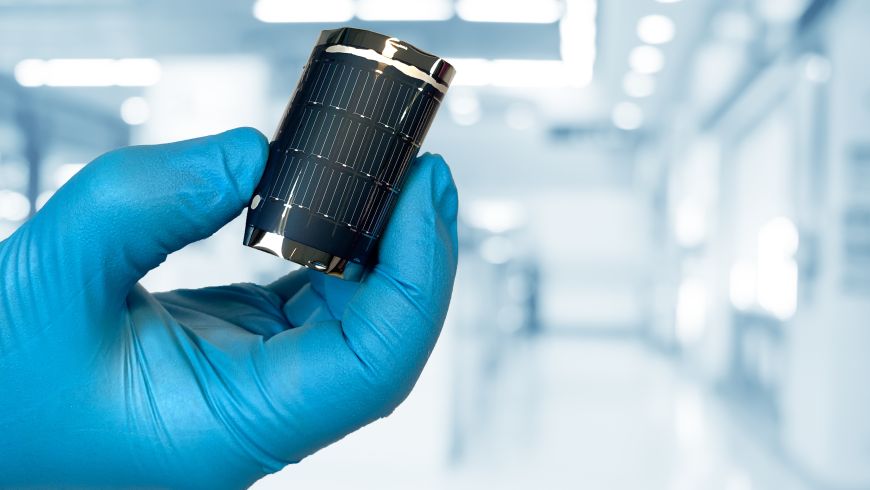 CIGS flexible solar cells consist of very thin layers and include a compound composed of the elements copper, indium, gallium and selenium. The layers are deposited onto flexible polymer substrates, mainly by vacuum processes. Image: Empa

The details of the research achievement will be presented at the 38th European Photovoltaic Solar Energy and Conference and Exhibition (EU PVSEC) on 7 September 2021 by Romain Carron, group leader in the Laboratory for Thin Films and Photovoltaics headed by Ayodhya N. Tiwari.

High efficiency flexible solar cells are processed on a polymer film by a low temperature co-evaporation method for the growth of the thin film Cu(In,Ga)Se2 semiconductor that absorbs the light. Empa scientist Shiro Nishiwaki optimized the composition of the layer and alkali dopants for achieving performance improvement. The researchers then investigated the effects of combined heat and illumination exposure after the processing of solar cells and found a boost in the photovoltaic performance, which remains stable after several months. The solar cell efficiency of 21.38% was independently measured at Fraunhofer Institute for Solar Energy Systems ISE in Freiburg, Germany.

Flexible and lightweight solar modules with this technology are especially suited for applications on roofs and facades of buildings, greenhouses, transport vehicles, airships and portable electronics. Empa collaborates with Swiss company Flisom for roll-to-roll manufacturing of lightweight flexible solar modules for such applications.

The research and development work was supported by the Swiss Federal Office of Energy.

Media release on the record of 2019

Media release on the record of 2011

Images
Images in high resolution can be downloaded here.
Follow us on social media