Reuse of electronic and electrical Equipment

The promotion of the reuse of electrical and electronic equipment is the subject of repeated public and political debate. Awareness of resource limitations, increasingly short innovation cycles and associated rapid changeovers to the latest generations of devices have sensitized many parts of society to this issue. In addition, there are falling prices and expanded functionalities, which are driving the purchase of new devices ever further.

For more than 20 years, equipment that ends up in waste disposal has generally been directly recycled in Switzerland. A check of the reusability of these devices is not required by law. The take-back systems of waste electrical and electronic equipment (WEEE), which perform their tasks on behalf of manufacturers, importers and wholesalers, are not contractually obligated to promote reuse of equipment prior to recycling and generally have little interest in doing so voluntarily.
Over the past few years, a number of private and public stakeholders have announced their support for repairing still-usable WEEE. Many consumers and politicians believe that, from an environmental point of view, reuse of WEEE is preferable to recycling. However, increases in energy efficiency, particularly for household appliances, have changed this picture in recent years. It therefore raises the question of where does the ecological limit lie? I.e. for what types of equipment and up to which age is reuse recommended from an environmental point of view?
From an economic point of view, the main question for a prospective purchaser of a used device is the purchase price (including any repair costs) compared to the option of buying a new device. The answer to this question depends on the age, condition and sale price of the used device.
In the present study, the ecological and economic aspects of electrical and electronic equipment (EEE) reuse were investigated. Examples of EEE considered include washing machines, refrigerators, televisions (LCD flat screen), smartphones and laptops. From an environmental point of view, it has been found that reuse of equipment for which most of their environmental impacts occur during manufacturing and disposal is always recommended. This mainly relates to electronic devices, such as laptops and smartphones. For devices that consume electricity and, possibly, water during use (e.g. cooling devices or washing machines) and that have a relatively high environmental impact during the use phase, at a certain age (device-specific) reuse actually becomes environmentally disadvantageous compared to the purchase of a new, replacement device.
EEE for which a substantial proportion of operating costs are generated during use and that also have a long service life - typically household appliances, such as washing machines or refrigerators - are characterized by high total costs of use (purchase price plus operating costs). Improvements in energy and water consumption have a significant impact on the total cost of these devices. Hence, the selling price of a used device – depending on its age and inefficiency – must be significantly lower than the price of a new device, so that the user of the used device incurs lower costs than if they were to buy a new, replacement device. This is not the case for information and communication technology devices (e.g. smartphones and laptops) and consumer electronics (e.g. televisions), which have low operating costs. For these devices, it is the purchase price alone that is crucial. Newer devices that are offered cheaply have better a chance of finding a buyer than older devices, for which manufacturers’ warranties rarely exist and the risk of failure is greater. It should also be kept in mind that those owners of older devices who are aware of their economic value first use existing sales channels, such as Ricardo, Tutti or e-bay, or pass on their device to a secondary user through private channels before such a device enters an alternative reuse channel.
Concerning the debate on the promotion of reuse, it should not be forgotten that a reused device does not always replace a new device, but in some cases simply leads to an increase in the total quantity of devices being used in society (a so-called rebound effect). After a new, replacement device is purchased, older devices are often still used elsewhere, for instance by other family members or in holiday homes, etc. This aspect has been scarcely studied so far.
Taking into account the results of the present study and the principles of waste management (prevention-reduction-recovery-elimination), we recommend: 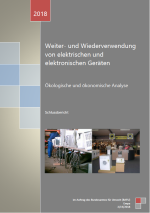