Within this field of research we strive at understanding and controlling the atomic and electronic surface structure of complex materials in order to achieve specific functionalities. One line of research investigates the physico-chemical properties of intermetallic compounds that promise higher selectivity in heterogeneous catalysis. The second one is concerned with self-assembled supramolecular nanostructures at solid surfaces and layered organic-insulator-metal hybrid structures which bear potential for nanoelectronic device function. 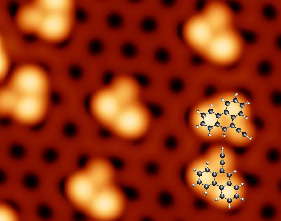 Complex Metallic Alloys (CMA) are intermetallic compounds characterized by large unit cells, which in the special case of quasicrystals  become infinitely large. They are a class of materials with fascinating properties such as low friction, corrosion resistance or high thermal stability. At the surface, their structural complexity is reflected in the presence of well-defined atom clusters. CMA surfaces offer great potential as highly selective heterogeneous catalysts, which calls for detailed studies of their structure-property relationship. The intermetallic compound Pd1Ga1, for example, is found to exhibit a chiral surface structure that leads to high enantioselectivity in the adsorption of prochiral molecules (see figure). Building on such observations, we pursue research towards the realization of enantioselective heterogeneous catalysis. In view of future technological applications of CMAs, we aim at establishing a fundamental understanding of all relevant chemical and physical processes underlying their catalytic activity and selectivity. 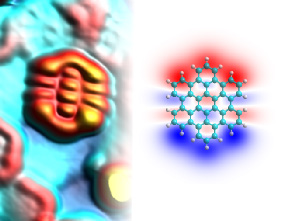 A prominent goal of molecular surface science is the fabrication of ultrathin functional organic layers with technologically useful structural, electronic or magnetic properties. Such molecular layers have been intensively studied on metallic substrates, but much less attention has been paid to insulators - although CMOS technology highlights their importance for successful technology integration. Therefore, we study key processes in molecular thin films on ultra-thin insulators, such as self-assembly, surface-induced templating, covalent coupling, or charge transfer. Recent work has been carried out on a single layer of hexagonal boron nitride (h-BN) on metal single crystal substrates, where the choice of the metal allows for a tuning of the functionality of the h-BN layer. A prominent example is the h-BN “nanomesh” on Rh(111), which not only provides an electronic decoupling of adsorbed molecular species from the underlying metal but also a strong templating effect for single molecules. Besides the prototypical h-BN, we use other 2D materials as ultra-thin insulators, such as the ones from the transition metal dichalcogenide family. 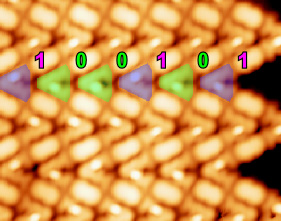 The exploitation of non-covalent interactions for the formation of regular molecular assemblies is a concept that has been used in supramolecular chemistry for nearly half a century and that has been transferred to surfaces during the last two decades. The structure of complex molecular lattices forming on flat template surfaces is dictated by a delicate interplay of intermolecular and surface-molecule interactions. Within this line of research, we aim at exploiting this interplay to the rational design and fabrication of self-assembled supramolecular nanostructures. To understand the atomistic details of the assembly processes, we compare experimental results to detailed ab-initio simulations, with the goal of obtaining generally applicable principles of organic device fabrication and function. In terms of functionality, we target structural function such as the hosting of specific guest molecules via selective host-guest interactions or the encoding of binary information via bi-stable conformations of regularly arranged molecules (see figure), but also electronic function such as specific charge transport or sensing properties.