The Empa Innovation Award 2016 went to chemist Sabyasachi Gaan and his team. The researchers were recognized for the development of new, non-toxic and environmentally friendly fireproofing agents for the production of flame retard polyurethane foams, which are used in mattresses, seat upholstery and insulation modules for house façades, for instance. The prize was awarded on 8 November against the backdrop of the Empa Technology and Innovation Forum. 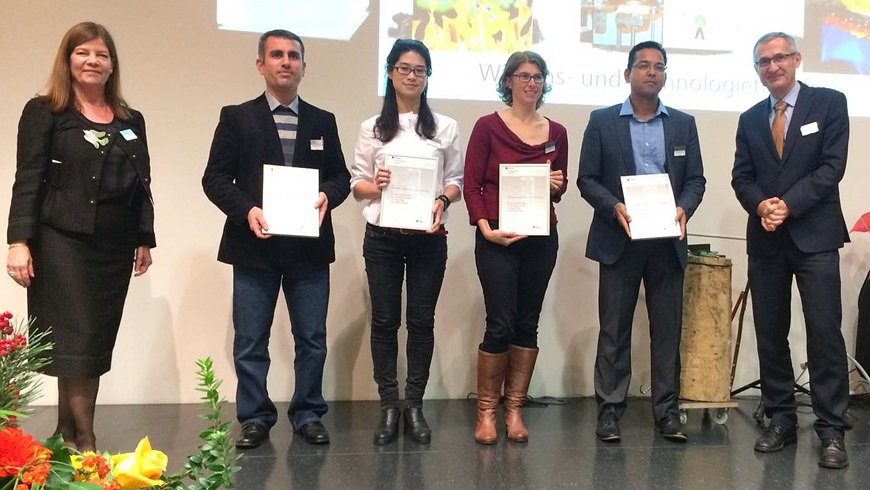 We frequently encounter polyurethane (PU) foams in everyday life: they are in the insulation in house façades and refrigerators, in car seats, in living room sofas and in shoe soles. PU mostly consists of carbon, hydrogen, nitrogen and oxygen atoms. As the air trapped in the foam’s pores also contains oxygen, the foam is highly flammable like most organic polymers and a flame retardant has to be incorporated in it to reduce the risk of fire. In recent decades, foam manufacturers usually used chlorinated phosphate as a flame retardant – a cost-effective additive that doesn’t disrupt the production process.

However, many of these chlorinated fire retardants are toxic and can evaporate from the foam over time and get into the ambient air. Consequently, these substances are already forbidden in many countries. The industry is urgently looking for environment friendly and non-toxic alternatives. Additionally, the PU foam market is huge: almost 20 million tons of PU foam are produced worldwide every year, the majority of which needs flame retardant additives. 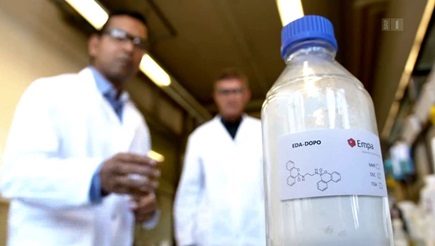 Gaan and his research team patented a family of derivatives based on DOPO (9,10-dihydro-10-oxa-phosphaphenanthrene oxide), which offers the desired properties. In particular, 6,6'-(ethane-1,2-diylbis(azanediyl))bis(6H-dibenzo[c,e][1,2]oxaphosphinine-6-oxide), or EDA-DOPO in short, fulfills technical, economic and environmental criteria. PU foams containing EDA-DOPO achieve the highest flame retardant classification in the UL 94 HB. Being solid at room temperature, it is unable to evaporate from the foam later on and thus offers an excellent solution for transportation sector. The powder also blends in well with the PU foam production process: it mixes very well with polyol, a base material for PU foam, and forms a stable dispersion, which can then be processed easily. The end result is foam where the solid flame retardant EDA-DOPO is finely distributed in the PU cell walls.

The award-winning research project began in June 2013 and was financed with EU and CTI research funds. Metadynea Austria GmbH and Foampartner Fritz Nauer AG in Wolfhausen were industrial partners. EDA-DOPO is currently produced on a 100-kilogram scale and under REACH Registration process.