Bringing the heat out of the city

Heat waves are increasing worldwide - and that includes Switzerland. Cities in particular suffer as a result: the temperature difference between city and countryside can amount to several degrees. A new water tunnel at Empa could help to alleviate these urban heat islands in the future - for example by cities ensuring lower temperatures locally through vegetation, water surfaces and brighter materials and creating space for wind to aerate cities better. 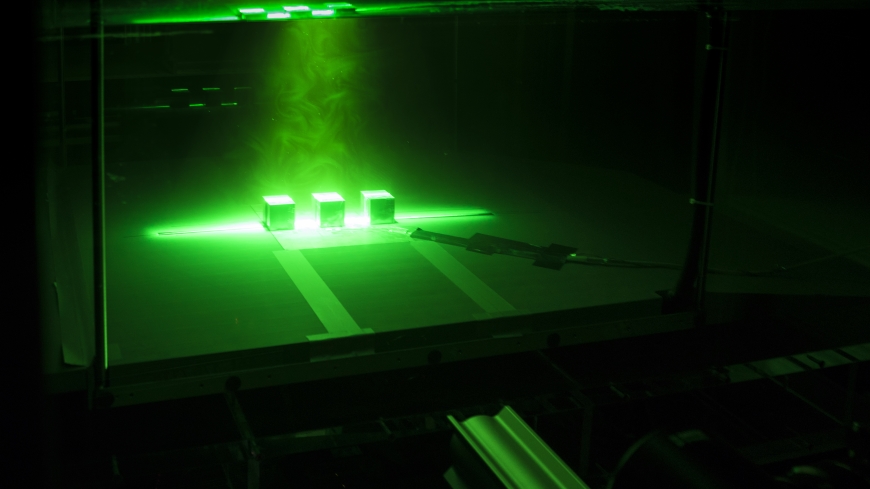 The water tunnel allows to analyse heat flows in cities.

April 2018 showed temperatures in Switzerland that are usually more common in May - and in May the weather was already reminiscent of midsummer. This is no longer an exception. Year after year the heat records are being broken. Cities suffer much more from the heat waves than the surrounding countryside: the temperature differences between urban zones and the surrounding green areas can be as high as several degrees.

The phenomenon is known as urban heat islands. There are several reasons for the temperature differences: The dark surfaces of pavements and rooftops absorb more sunlight during the day - and retain it better. Additional heat is generated in the city by traffic and industry. Furthermore, there is usually a lack of vegetation that could reduce the temperature by evaporation. And the closely spaced buildings block the wind, which could bring cooler ambient air.

How can wind carry heat out of the city?

The heat is not only unpleasant but also has severe effects: Energy consumption for cooling is increasing, ozone levels at ground level are rising and temperatures are leading to additional illnesses and even deaths. And more and more people are affected: Over half of the worlds population lives in urban areas today. By 2030, this percentage is expected to rise to two thirds. Cities and research groups around the world are working on ways to alleviate this urban heat island effect. Special attention is paid to the wind: it could dissipate the heat from the cities, bring cooler air from surrounding lakes and forests and additionally cool the surfaces by convection. During heat waves with little wind, the buoyancy effect plays an important role: when hot air rises above the city, cooler air can flow up below. In addition, areas with cooler air can be created: For example, parks with vegetation, lighter surfaces that absorb less solar radiation or surfaces where water evaporates - for example, artificial lakes or wet materials. The wind can distribute this cooler air in areas where the heat island effect cannot be fought locally.

In order for the wind to dissipate the heat from the cities, however, the city must be built in such a way that air masses can flow relatively easily around the buildings. However, this is anything but trivial: there has not yet been enough research into how urban structures influence local wind conditions. In order to optimize cities in such a way that they can efficiently prevent the heat islands, one must first understand what exactly happens: How does the wind flow and swirl on buildings and over heated roads? And how does this change the temperature distribution?

A matter of scale

Answering these questions is the aim of the new water tunnel at Empa, which was officially inaugurated today. But why does it take a water tunnel to better understand wind movements? It is a matter of scaling: Since the models of urban structures are only a fraction of the size of real buildings and roads, water behaves exactly like wind in a real city at suitable flow speeds. The water tunnel has two clear advantages over a wind tunnel, which is also suitable for studying wind flows in cities: On the one hand, smaller models can be used, i.e. a larger area of the city can be examined. On the other hand, the flow field and the temperature distribution in the water can be measured simultaneously.

This is done with a laser measuring system: the research team mixes tiny particles and a fluorescent dye into the water. The particles are illuminated with a pulsating laser beam extended to a plane. During such a laser pulse, a camera takes two images in rapid succession. The measuring system can now evaluate how far and in which direction the particles have moved between the two images and determine the flow velocities and flow directions. Thanks to the fluorescent dye, the researchers can determine the temperature distribution: It absorbs green laser light and emits light of a different colour - the warmer the water, the brighter the light. A second camera, which filters out the green laser light, records the emitted light distribution.

The determination of the cool and warm flow structures allows researchers to gain new insights into how heat can be removed from cities. These results could help planners, architects and governments in the future to develop cities so that life in urban areas remains bearable even during increasing heat waves.