Just add a drop of water

A paper battery with water switch

A team of researchers at Empa developed a water-activated disposable paper battery. The researchers suggest that it could be used to power a wide range of low-power, single-use disposable electronics – such as smart labels for tracking objects, environmental sensors and medical diagnostic devices – and minimize their environmental impact. The proof-of-principle study has been published in the journal Scientific Reports. 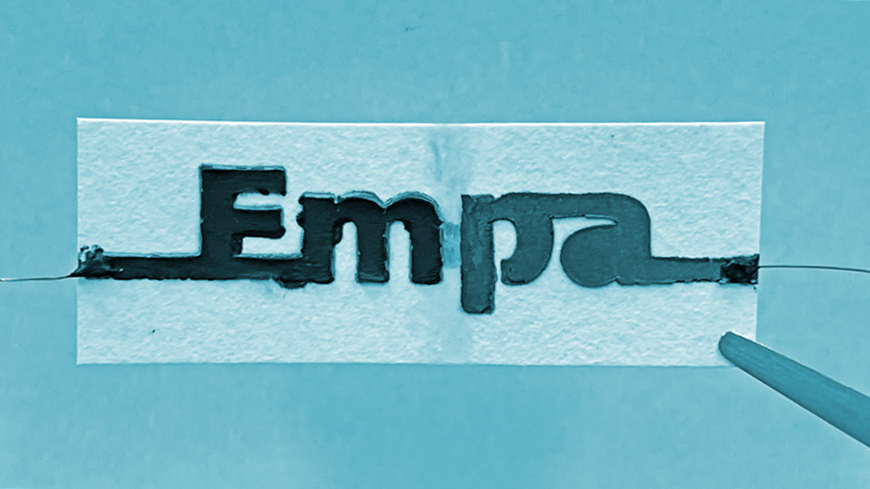 The paper battery is composed of two electrochemical cells – at both ends of the paper strip – separated by a water barrier (between the letters "m" and "p") and connected in series. Image: Empa

The battery, devised by Gustav Nyström and his team, is made of at least one cell measuring one centimeter squared and consisting of three inks printed onto a rectangular strip of paper. Salt, in this case simply sodium chloride or table salt, is dispersed throughout the strip of paper and one of its shorter ends has been dipped in wax. An ink containing graphite flakes, which acts as the positive end of the battery (the cathode), is printed onto one of the flat sides of the paper while an ink containing zinc powder, which acts as the negative end of the battery (the anode), is printed onto the reverse side of the paper. Yet another ink containing graphite flakes and carbon black is printed on both sides of the paper, on top of the other two inks. This ink makes up the current collectors connecting the positive and negative ends of the battery to two wires, which are located at the wax-dipped end of the paper.

When a small amount of water is added, the salts within the paper dissolve and charged ions are released, thus making the electrolyte ionically conductive. These ions activate the battery by dispersing through the paper, resulting in zinc in the ink at the anode being oxidized thereby releasing electrons. By closing the (external) circuit these electrons can then be transferred from the zinc-containing anode – via the graphite- and carbon black-containing ink, the wires and the device – to the graphite cathode where they are transferred to – and hence reduce – oxygen from ambient air. These redox reactions (reduction and oxidation) thus generate an electrical current that can be used to power an external electrical device.

Proof of concept: a sustainable energy source for low-power electronics

A stencil-printed paper battery designed to spell out the name of our research institute ("Empa"). The battery can run low-power electronics such as the liquid crystal display (LCD) alarm clock connected to the battery. Image: Empa

To demonstrate the ability of their battery to run low-power electronics, Nyström's team combined two cells into one battery to increase the operating voltage and used it to power an alarm clock with a liquid crystal display. Analysis of the performance of a one-cell battery revealed that after two drops of water were added, the battery activated within 20 seconds and, when not connected to an energy-consuming device, reached a stable voltage of 1.2 volts. The voltage of a standard AA alkaline battery is 1.5 volts.

After one hour, the one-cell battery’s performance decreased significantly due to the paper drying. However, after the researchers added two extra drops of water, the battery maintained a stable operating voltage of 0.5 volts for more than one additional hour.

The researchers propose that the biodegradability of paper and zinc could enable their battery to minimize the environmental impact of disposable, low-power electronics. "What's special about our new battery is that, in contrast many metal air batteries using a metal foil that is gradually consumed as the battery is depleted, our design allows to add only the amount of zinc to the ink that is actually needed for the specific application", says Nyström. Metal foils were more difficult to control and not always fully consumed leading to a waste of materials. So the more zinc the ink contains, the longer the battery is able to operate.

A more critical point of the battery's current design with water activation, Nyström adds, is the time it takes for the battery to dry out. "But I am sure this can be engineered differently to get around this problem." For environmental sensing applications at a certain humidity or in wet environments, however, the drying of the paper would not be an issue.

Previously, Nyström's team had already developed a paper-based degradable super capacitor that could be charged and discharged thousands of times without losing efficiency. Compared to batteries of the same weight, supercapacitors have an energy density that is around 10 times lower – while at the same time having a power density that is around ten to one hundred times greater. Supercapacitors can therefore be charged and discharged much faster. They can also withstand many more charge and discharge cycles. "So the two devices are actually complementary", says Nyström. The idea behind the new water-activated battery was to be able to manufacture devices that are fully charged and that only release this energy after the triggering of a stimulus, in this case simply a drop of water.