Optimizing indoor temperatures – thanks to AI

The Empa spin-off viboo has developed a self-learning algorithm for controlling the indoor climate. This enables predictive cooling or heating of buildings, thus saving around one third of energy. Following successful experiments at NEST, Empa's and Eawag's research and innovation building, the first pilot projects are now being implemented with industrial partners. 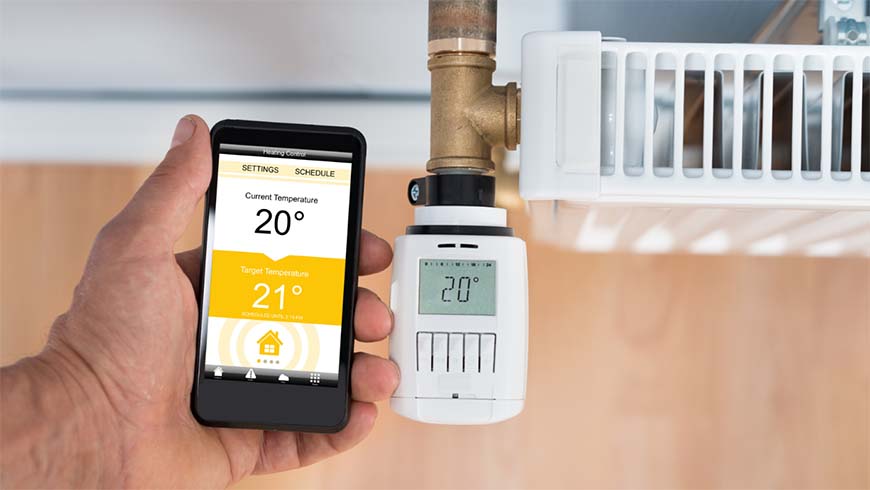 Conventional thermostats, which are commonplace in many residential buildings today, only react when the temperature falls below or exceeds a certain threshold. The reaction is therefore always too late and too severe, as the desired temperature is to be reached again as fast as possible. This costs energy and ultimately money. The solution: a thermostat that looks ahead and regulates the room temperature with foresight.

Looking ahead to save energy

A spin-off from Empa, which is currently in the start-up phase, is making this peek into the future possible. The company goes by the name of viboo, which stands for "viable intelligent building operation optimization." In the course of their research at Empa, the founders Felix Bünning and Benjamin Huber developed an algorithm that controls buildings predictively. Remarkably, building data of only two weeks, such as valve positions and room temperature measurements, are needed to create a model of the building. In combination with predictions of the local outside temperature and global solar radiation, the algorithm then independently calculates up to twelve hours in advance the ideal energy input for heating or cooling the building. This eliminates sudden reactive control operations, thus eventually consuming significantly less energy.

"The potential is huge. Our experiments at NEST have shown that this approach can achieve energy savings of between 26 and 49 percent," explains Felix Bünning. The researchers used the research and innovation building on the Empa campus in Dübendorf to test and further optimize the algorithm in a real-world environment. The field tests generated interest from industry, and the researchers realized that they should bring their algorithm from their lab to the market.

The motivation of the two scientists is not financial, but rather societal. "An enormous amount of energy is used worldwide for the heating and cooling of buildings. This is one of the reasons why the building sector accounts for a large share of the global CO2 emissions. With our algorithm, we want to help as many households as possible to save energy and thus make our contribution to reducing these emissions," says Bünning. A first funding initiative has already acknowledged the potential of this idea. In November 2021, Venture Kick awarded viboo a grant of 40,000 Swiss francs. In addition, Felix Bünning is supported by a BRIDGE Proof-of-Concept Fellowship from the Swiss National Science Foundation (SNSF) and Innosuisse, Switzerland's innovation agency.

"We are currently focusing on thermostat manufacturers for residential buildings. Many of these companies already have smart thermostats in their portfolio. We integrate our algorithm into them by using a cloud-based solution," explains Felix Bünning. A first partner is the international thermostat manufacturer Danfoss. Together with the company, viboo is now implementing the first pilot project in a conventional building. In this project, the conventional thermostats in Empa's administrative building are being replaced by smart thermostats, on which the viboo algorithm is running. Based on the indoor climate data, the algorithm will first create a model of the building. Then, it will take over control of the heating over a period of four months. The central question is: How efficiently does the algorithm regulate indoor temperatures compared to a standard solution? This will provide information about its potential for older buildings.

In addition to the pilot project, viboo is already talking to other industry partners to explore further potential applications. The spin-off will, for example, integrate the algorithm directly into the building automation system in a new building in Zurich and thus optimize the heating and cooling control in this office building.

Success Story on the experiments in the NEST building