“Heat islands” in the city

June 2017 broke quite a few weather records in Switzerland. Above all the month was extraordinarily hot, the second hottest June on records, peaking in a heat wave between 19 and 23 June. Cities heat up even more than the surrounding regions, an effect known as urban heat islands. To better understand the causes of – and, more importantly, develop effective mitigation measures against – urban heat islands scientists at Empa and ETH Zurich combined weather forecast models with the effects of buildings and streets and came up with a very detailed heat map of Zurich, which can be used to accurately predict local air temperatures. 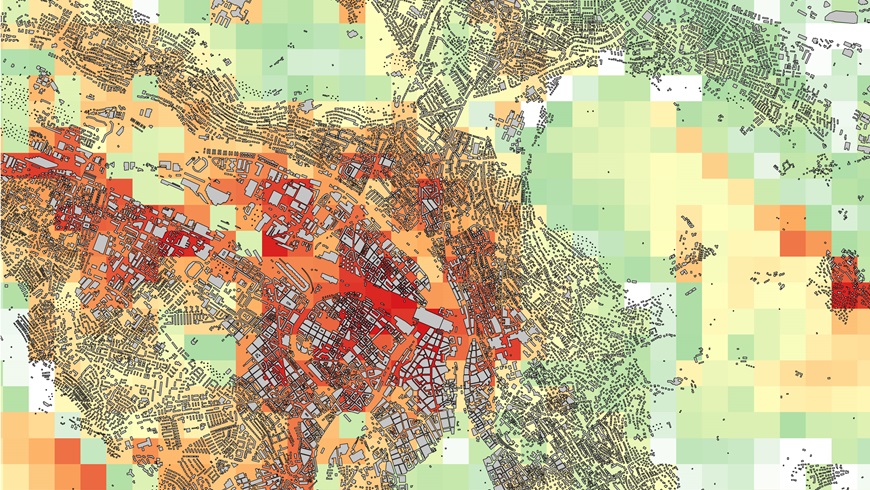 The latest heat wave in Switzerland in late June 2017 brings back memories of the heat waves of 2015 and 2003. Urban areas are most strongly affected by heat waves, since these regions experience an urban heat island (UHI) effect characterized by higher air temperatures compared to the surrounding rural environment. Reasons for urban heat islands are darker colors of, say, roofs and streets leading to a higher absorption of solar radiation energy, less shadowing, lack of evaporative cooling by vegetation, lack of open spaces, lack of ventilation and nighttime cooling due to urban densification.

Urban heat islands have been reported for more than 400 cities around the world and are found to amount to up to seven degrees of excess temperature, especially at night. Heat waves not only contribute to general discomfort and sleepless nights, but can also cause respiratory difficulties, exhaustion, heat stroke and other heat-related fatalities due to the impact on the human cardiovascular and respiratory systems.

800 – 1000 extra casualties due to extreme heat in Switzerland 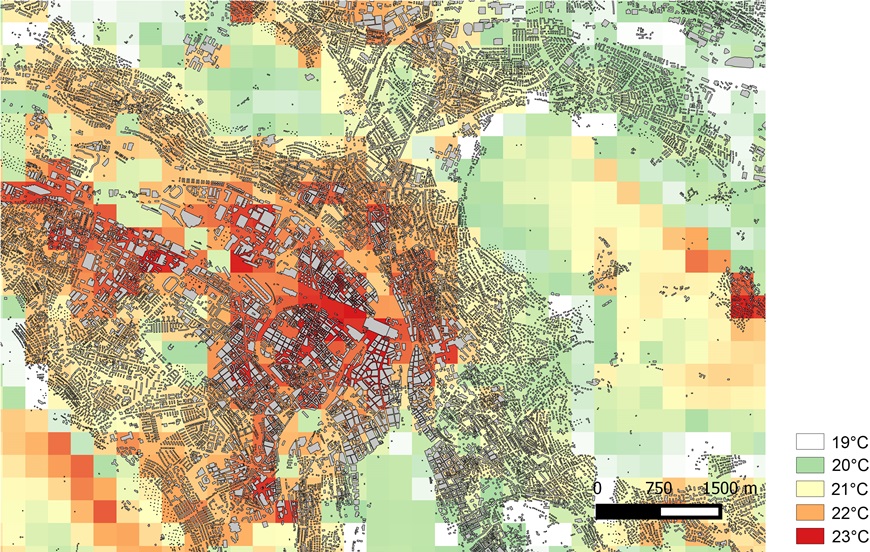 Heat island effect in Zurich during the heat wave in June 2017: Zurich “heat map” with modelled mean air temperatures two meters above ground at 6 AM on 22 June. The largest building below the center of the image is Zurich’s main station. The light-green open space at the bottom is Lake Zurich. (Source: Empa / ETH Zurich / Gianluca Mussetti)

Switzerland experienced serious heat waves during the summers of 2003 and 2015, which have been the two hottest summers for more than 150 years. For these summers, an excess mortality of 6.9% and 5.9%, respectively, was estimated corresponding to 975 and 804 extra deaths for these years, according to an investigation by researchers of the Swiss Tropical and Public Health Institute in Basel in 2016. Altogether more than 70’000 additional deaths were reported in Europe in the summer of 2003.

Heat waves can be simulated by weather forecast models, but their impact on cities is still not well understood. This is why Jan Carmeliet, a professor of building physics at ETH Zurich, and Dominik Brunner, an atmospheric scientist at Empa, the Swiss Federal Laboratories for Materials Science and Technology, enriched weather forecast models with the effects of buildings and streets to better predict local air temperatures in cities. The resulting “heat map” of Zurich shows details of the heat island at a resolution of down to 250 meters (see Figure).

UHI effects are strongest during nighttime because of the storage of heat by building materials during the day and the release during nighttime. Gianluca Mussetti, a PhD student at ETH Zurich and Empa, investigated the characteristics of the most recent heat wave (20-24 June 2017) in Zurich. During the night of 21 June, he observed a UHI intensity of almost 6 degrees, i.e. 1.5 degrees above the UHI intensity during the heat wave of 2015. What’s more, within the city Mussetti modelled temperature contrasts between the coolest and the warmest locations of up to 3 degrees on these days. It has been known that heat waves manifest themselves especially at local “hot spots” in cities. For Zurich one sees particularly high nighttime air temperatures in the densely built-up city center, and relatively cooler temperatures for the region next to the lake, along the Limmat, and on the slopes of Zurichberg where cool air is flowing down from higher levels during the night. In particular, the researchers could observe a close correlation between urban ventilation and air temperatures: lack of urban ventilation leads to less removal of heat – and hence a higher UHI intensity (see Figure). 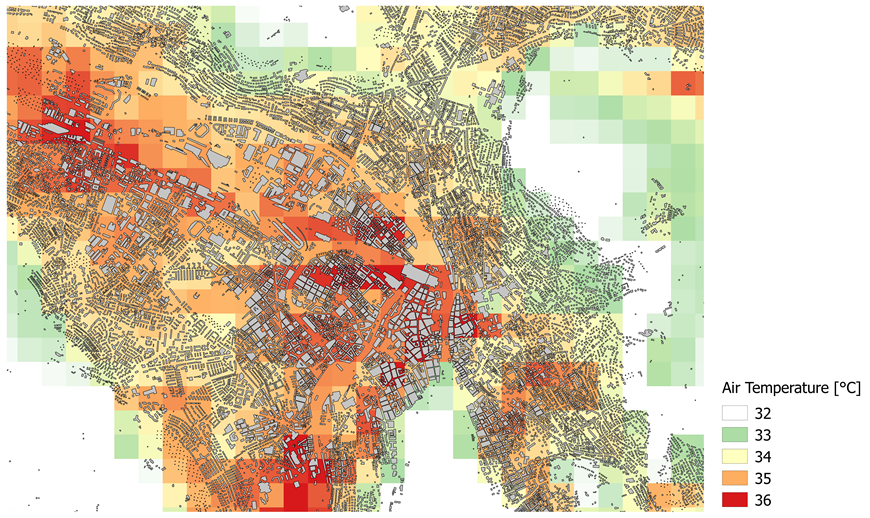 Facing an increasing occurrence of heat waves in future, together with the appearance of urban and local heat islands, city dwellers worldwide are seriously threatened with respect to their comfort and health. Hence, the assessment of urban heat islands and strategies to implement their mitigation are becoming increasingly important for many affected countries and cities. Response strategies to cope with climatic change and proposed adequate mitigation measures have to be implemented over a long period of time to become effective once sufficient adaptive measures are in place.

In future studies, the researchers at ETH Zurich and Empa want to better understand the causes of urban heat islands and local hot spots in cities. They want to develop mitigation measures, such as a more active use of urban water during heat waves, temporary cooling measures such as smart urban shadowing or cooling pavement systems.