How classic cars are to become climate-neutral

Synfuels: A solution for historic vehicles?

Synthetic fuels can make a contribution to achieving climate targets. But can they be used in conventional combustion engines without any problems? This question is being investigated by Empa in collaboration with the Swiss car importer AMAG. 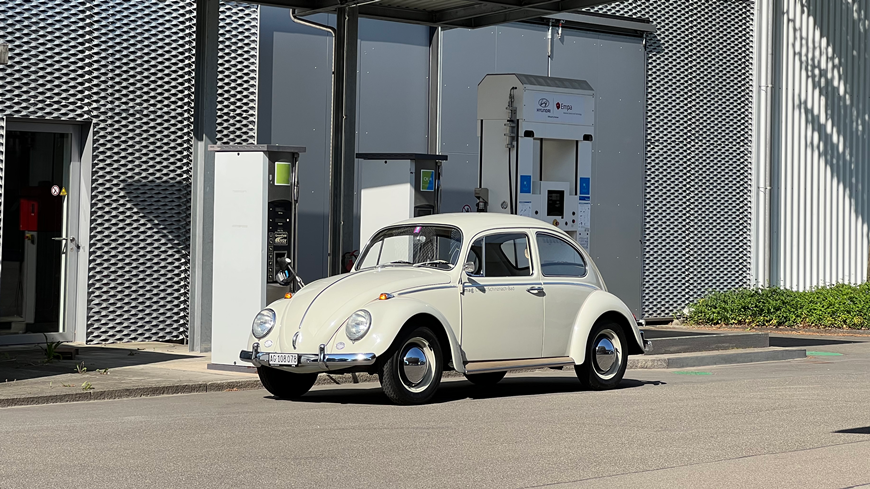 With synthetic fuel, even classic cars could be on the road with low CO2 emissions. A series of tests conducted by Empa together with AMAG investigates the compatibility of old technology and new fuel. Image: AMAG

Even though it is now obvious that the future of passenger cars is likely to be largely electric, it will still be many years before the majority of the existing vehicle fleet is converted. In addition, according to a study by the Swiss Historic Vehicle Federation (SHVF), there are around 156,000 classic cars and motorcycles (vehicles older than 30 years) as well as many youngtimers registered in Switzerland.

For this fleet of vehicles, synthetic (i.e.: artificially produced) fuels made from renewable hydrogen and carbon dioxide are, in theory, the obvious solution to reduce CO2 emissions. But is old technology compatible with novel fuels? This question is being investigated by Empa in collaboration with the AMAG Group. In various test series, the material compatibility of individual components, the effect on the engine oil of vintage cars in their typical sporadic use, and the operating and exhaust gas behavior are being investigated. The series of tests, which will start in the summer of 2022 and last around a year, will show whether the hopes of classic car owners will be fulfilled: They would like to be able to drive their classic car without any (technical) problems and at the same time with low CO2 emissions.

Christian Bach, head of Empa's Automotive Powertrain Technologies lab, who is leading the project, says: "In theory, there is nothing to stop older cars being able to run on the new fuels in the long term; however, without clean clarifications on this, the new gasoline would hardly be used in the partly expensive vehicles." Since synthetic fuels are currently only produced in small quantities, the first challenge was to find a suitable fuel on the market."

Dino Graf, who is also responsible for the AMAG Group's historic vehicle collection, adds: "Synthetic fuel is the solution to ensure that the cultural asset of classic cars can continue to be driven in future – and almost as climate-neutrally as an electric car. That's one of the reasons why the AMAG Group has also taken a stake in the Swiss company Synhelion, which plans to produce Solarfuel in industrial quantities very soon."